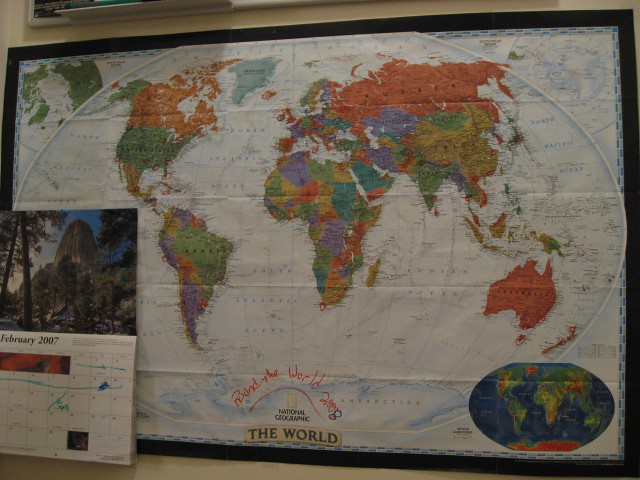 Goal: Find a new job
Motivation: So I can pay off credit cards

Goal: Pay off credit cards
Motivation: So I can begin saving money

You’ve probably deduced a few things about me already. I started writing in a journal in 2002. My reasons were unrelated to travel plans, however it served as a great outlet for that subject too. I’m goal-oriented, or at least began to develop an awareness of, and strength behind, that trait in 2002. I was unemployed and in debt. It would seem to be an odd time to consider setting such a grandiose goal as to eventually quit a job I have yet to obtain so as to backpack around the world. There were a few other undercurrents in my life at the time though.

I had begun to re-examine my values at the same time I began to explore Buddhism. The confluence of thoughts lead me to place a higher value on international travel (experience) than materialistic wealth. As I recall, the epiphany was rather understated. It was a simple thought to myself, the power of which I would not realize until years later. Almost everything I write in my blog can be attributed to this affirmation, or clarification, in values.

Deciding to place a higher value on experience rather than material goods is not an easy task in the consumption-hungry society of the United States. It’s a challenge, though with practice, I miss the desire and attachments less and less. It all starts with an awareness of what you’re buying into and whether all that buying leaves you any happier than before. I’ve found backpackers tend to share this common value, as well as hippies! Enough about the serious stuff, let’s look at how scary my finances were in early 2002. Perhaps we can have a good laugh.

In March 2002, I had been laid off from my first job (at CareerBuilder.com) since graduating college. Between severance pay, vacation time, and unemployment benefits, I felt fairly comfortable in the short term given the enormous shock to my life. Unfortunately, I took some heart in the fact that all of the employees, from the CEO down, had lost their jobs at the hands of our parent company (Tribune and Knight Ridder publishing). Such was life when you worked for a technology company during the high-tech boom. At the time, my debt looked something like this:

Five years later, I’m executing the last few months of my savings plan, and am on track to reach my goals. It’s a great feeling, and I hope this series on how I got here can help others make their dream travels (house, Ferrari, etc.) a reality!

Note:  While this post was originally published in April 2007, it was discovered missing in 2011, and therefore re-added and backdated.

Wicked cool! That is true dedication right there! And there are people who say they can't afford it lol. But, they will happily pay for their Starbucks everyday, their puppy, there many kids, birthday gifts for friends and family, excessive shoes and clothes, and the list goes on...

I've recently made my decision only a few short weeks ago. I'm in the process of shutting down my life. It should take around 5 months or so, then I will hit the dusty trail :-)