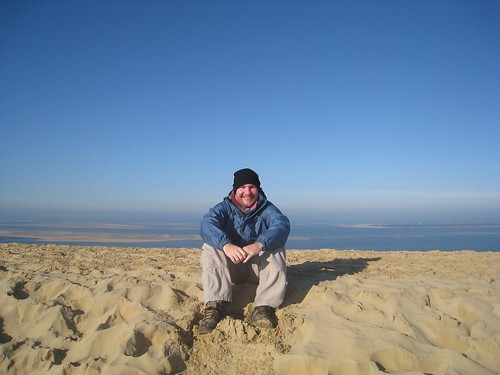 On this day, Magali working a long shift at the bakery, Sebastien took me around the Bay of Arcachon. Biganos, the town where Magali's mom lived, was at the southeast edge of the bay. First, we drove southwest to the Dune of Pilat, Europe's biggest sand dune. Formed during the 18th century, it was 104 meters high, 2.7km long, 500 meters wide, and consisted of 60 million cubic meters of sand. 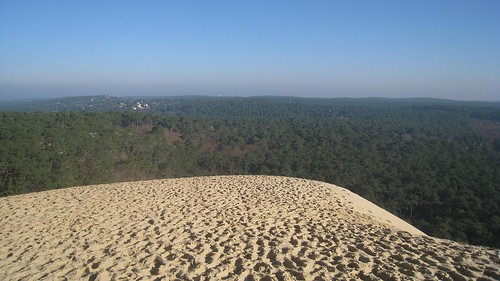 I was wheezing on the way up, my heart pounding as though I were back in the Himalaya. The steady diet of chocolate and cheese was taking its toll. Atop the dune, the views of the surrounding pine forests and oyster farms near the entrance of the bay were stupendous. It was around this time I began to recall images of Anthony Bourdain's return to France in his Food Network show (and book) ” A Cook's Tour.”? 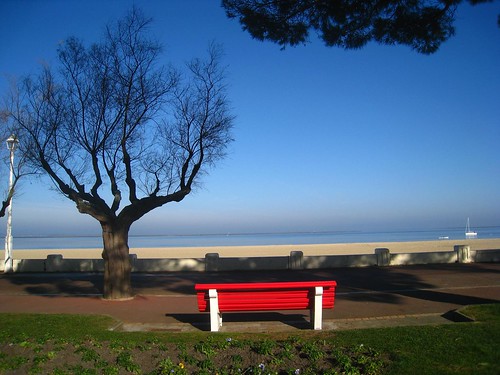 Next, we backtracked a little to walk through the town of Arcachon. It was very pretty, and despite the cold, the sunshine was nice and I could imagine what it would be like in Spring or Summer when the sidewalks and cafes would be busy with French and European vacationers. 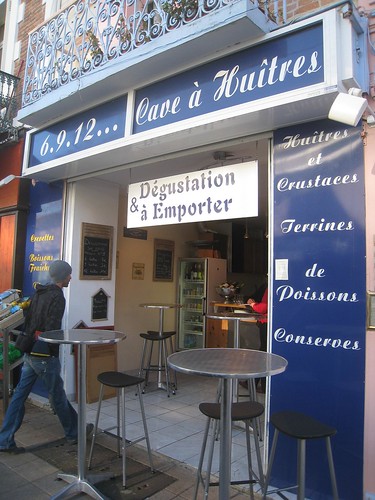 We stopped in a little shop to try some oysters. Based on the tourism brochure I read, it seemed mandatory, but I didn't expect to enjoy them. I was wrong. They were fresh, three years old, and delicious with a squeeze of lemon. As Sebastien had mentioned, the flavor of sea water is tasty. We each had three, then ordered a second set of six since there are probably few oysters on Earth that would taste so good. 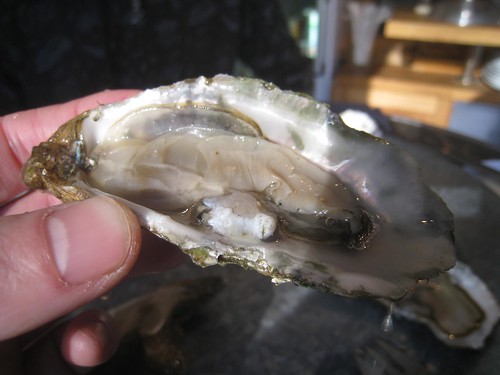 They're not particularly filling, but with a glass of white wine and some bread and butter, divine. This moment also reminded me of the way Bourdain talks about tasting his first oyster in France as a child as a defining moment in his life. 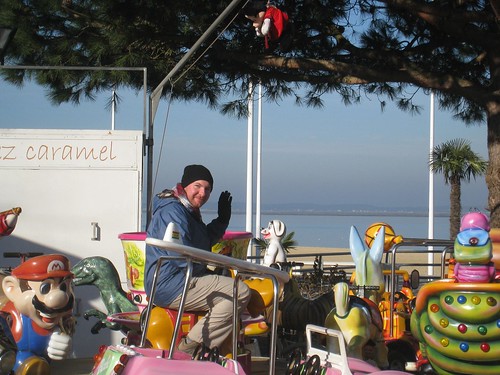 We then drove all the way around the bay toward Cape Ferret, stopping to walk through a village of oyster farmers along the way. It was rather deserted, being the low season, but perfect for taking a few photos. At La Pointe, we parked the car and went for a walk on the beach. There were quite a few people and dogs doing just the same. 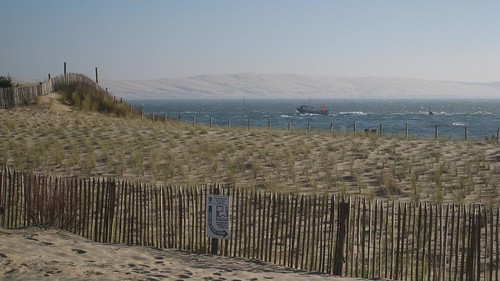 It was only from this vantage point across the bay that I could gain a real appreciation for the monumental size of the sand dune we climbed in the morning. When we reached the old WWII embattlements, mostly covered by sand and graffiti, I was all but sure Bourdain's ” France”? chapter/episode took place on the same beach, as he reminisced about playing around on the relics of the past. Our last stop before returning home was a trip up the local lighthouse for a 360-degree view of the bay. 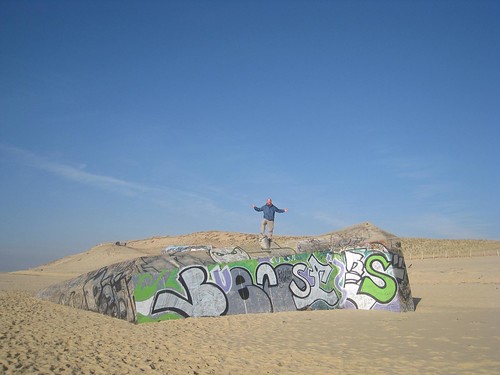 Back at the house, I dug up confirmation online that the Bay of Arcachon was the location Bourdain use to visit as a kid, and did so once again with his brother as an adult. Yet again, I felt a connection with him, which is funny because his visit was to feel a connection with his childhood. At any rate, if you taste a fresh oyster in Arcachon, it's hard not to appreciate the moment, atmosphere, and (if you're lucky) company. 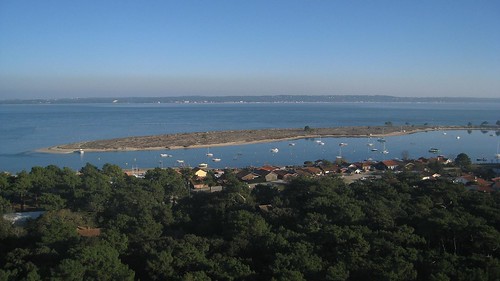 In the evening, Magali still working hard to serve the best pastries to feisty and indecisive clientÃ¨le, her mom made meat fondue and fries for Sebastien and I, which was complimented by a bottle of red wine from St. Emilion. There were at least 5 different bottles of sauce available for dipping, including a Bearnaise, pepper, and Bordeaux. The immediate dessert consisted of two of the cheeses we had tasted the day before. I was stuffed. 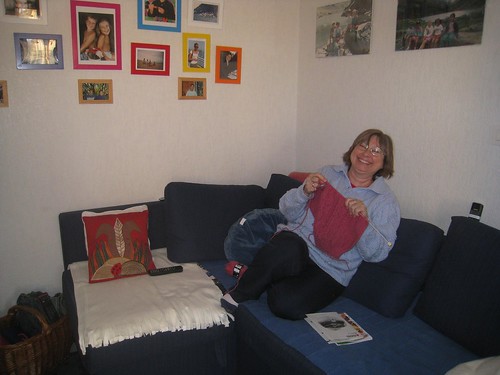 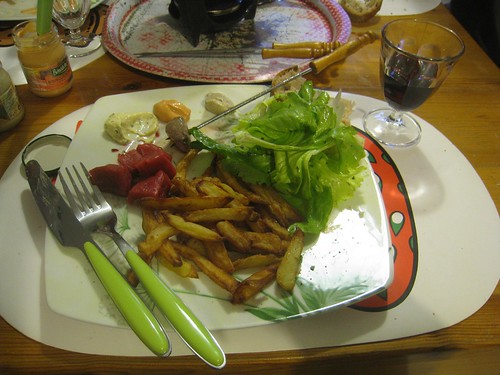 Mom retired at 10pm, so I said goodbye and thanked her for everything. Seb and I waited up for Magali, watching CSI, NYC. She got back from work around midnight, carrying two boxes of assorted pastries. I joined her for another glass of wine and we ate some of the unsold treats from her bakery. I chose a chocolate one with mousse and cake, wrapped in a thin, flat sheet of chocolate. 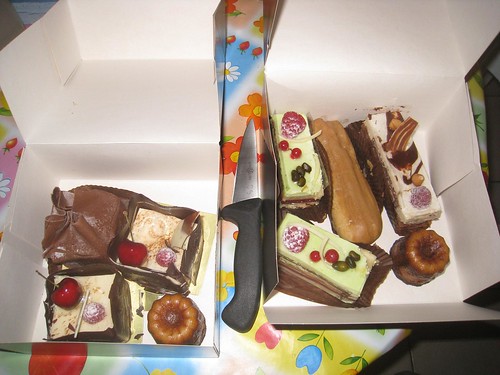 Hi Leah, I wish I could offer some suggestions but I was staying with friends so I didn't have a need to research resort or hotel options. You might want to check the sites like Trip Advisor for ideas. I bet there are plenty of B&B's that could be nice to stay at too.

I googled Arcachon and your posting came up. Im considering going here in July for 4 days...looking for a small resort, a nice beach, nice scenes...basically a quaint seaside village. Would you recommend?

Hi Ginette - thanks for stopping by. Glad I could bring back some good memories. I hope to return to Arcachon Bay in the Summer to get the full experience - I bet it's wonderful!

Hi Ginette - thanks for stopping by. Glad I could bring back some good memories. I hope to return to Arcachon Bay in the Summer to get the full experience - I bet it's wonderful!

loved your pictures which I found by accident,I have family in Merignac (about 15 miles?) I now live here in the states and once in a while it is nice to remember!Thanks for the pictures.GB