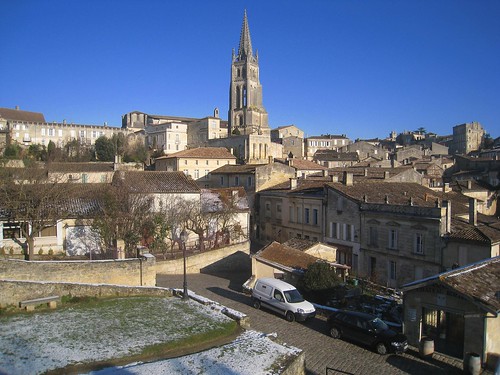 In the morning, we ate bread and chocolate pastries for breakfast, before heading off to St. Emilion, the ” wine city”? northeast of Bordeaux which Magali first told me about during our time in South Africa. The district boasts 822 winegrowers and 5,400 hectares of vineyards. According to a tourism brochure, the land owned by each grower has remained small, usually 7 hectares, and within the same family for generations. Along the way, we picked up more antibiotics for my ailing digestive tract. 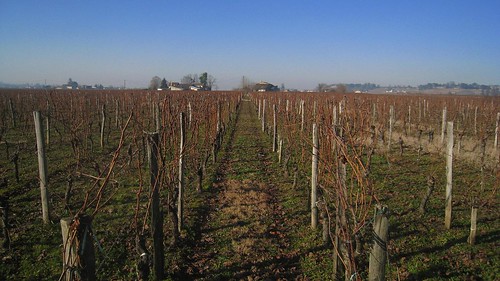 We spent the morning walking around the empty streets of the medieval town, tasting some local cheeses, and enjoying a private wine tasting at Chateau Mauvezin, a family run winery going back 15 generations. 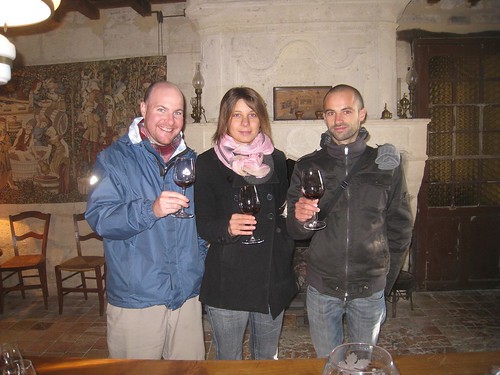 I went all out for lunch at L'Antre Deux Verres which was positioned under a bell tower built between the 12th and 15th centuries. We were seated near a big, open, wood-burning fire which kept us warm and enveloped in a steady fog of smoke. 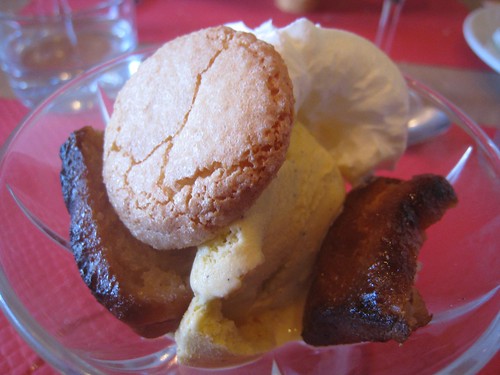 I ordered soup with Parmesan to start, followed by filet mignon of pork with a white cream sauce and fries, and vanilla ice cream with a macaroon and a small cake unique to the Bordeaux region. The meal was complete with a 2002 vintage bottle of locally produced red wine. 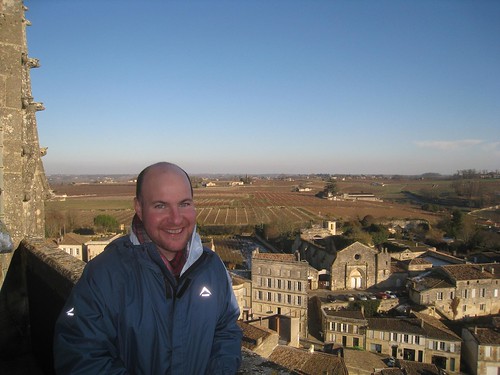 After lunch, we climbed the bell tower for crisp, clear views of the town and surrounding vineyards. We also joined a French-speaking guide to tour the small Hermitage carved out of a natural grotto where Emilion lived, and the Monolithic Church, an underground church carved entirely out of solid limestone, complete with catacombs and a few skeletal remains still in their final resting place. By volume, it is the largest in Europe. No photos were allowed, but it was an awe-inspiring experience to be within such a unique church. Magali translated so I had some sense of what was being told to us. 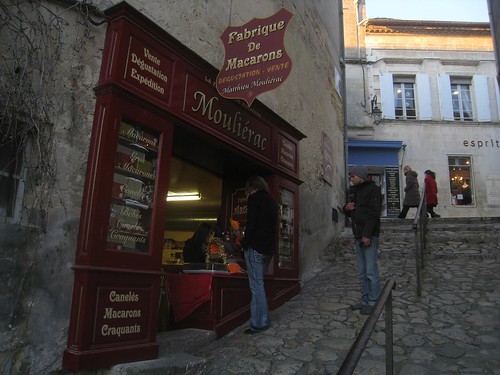 I wanted to buy a souvenir to remember my visit to this World Heritage listed town, and opted for a smooth-operating, French made corkscrew. I'm sure it will encourage wine-drinking for years to come. 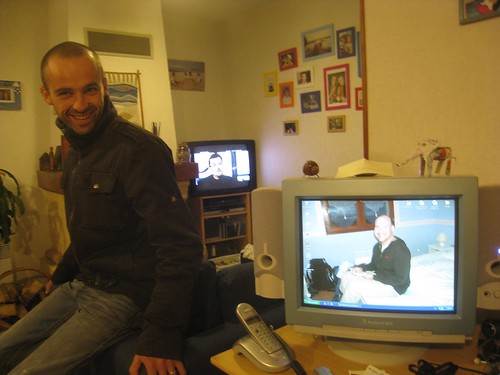 We returned home for a break, at which point I sat in bed and began to write in my journal. Magali's mom took my photo and said something I didn't understand. Later, when I walked out into the living room, I was greeted with the photo of my silly mug on the desktop of her computer, thereby replacing the one I took of her daughter playing with the village kids in Bulungula! 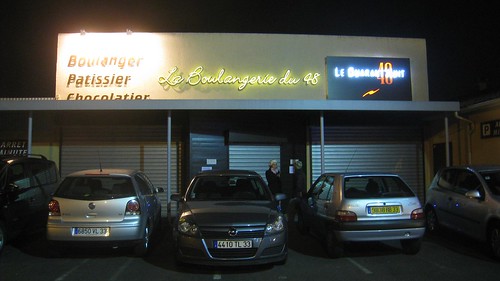 Our next adventure lead us to the bakery and restaurant where Magali works. She studied food, wine, and the restaurant business in university. We sat at the restaurant bar for a little bit. The manager was mixing drink orders non-stop, and overhead, images from Fashion TV's lingerie segment flashed on a projection screen. I tried not to stare at the bare bums too long. The pastries in the bakery looked better than any other I'd seen in Paris or the rest of Europe. Since she had to work the next day, the plan was made to bring some samples home for a taste test.

We ate dinner in Bordeaux's city center again. A nice wine bar where we ordered a selection of cheeses, meats, and two breads, one with eggplant and cheese, the other with ham and peppers. After enjoying a few more glasses of wine, Sebastien took the wheel on the ride home while Magali and I fell asleep.

How do I find your posting on Bulungula?

Do a keyword search in the search box on the left side of the blog under Archives, or here is the direct link - https://gobackpacking.com/2008/12/01/beautiful-bulungula-2/

How do I find your posting on Bulungula?

Do a keyword search in the search box on the left side of the blog under Archives, or here is the direct link - https://gobackpacking.com/2008/12/01/beautiful-bulungula-2/