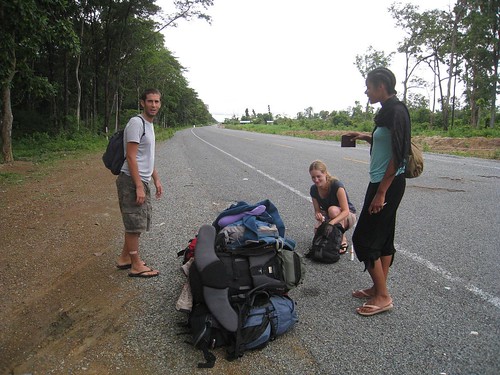 I awoke early, which was a good thing, as I got a knock at my door five minutes to 8 am saying I could take the morning bus to Laos (as opposed to the 1 pm bus I missed the day before). I quickly washed up, checked out, and hopped in the waiting minibus. There was a French couple – Nicholas and Caroline, a UK couple – Justin and Cat, and a single French girl, Celene, who I sat next to in the back. It was an hour or so drive to Laos' southern border which was very quiet. 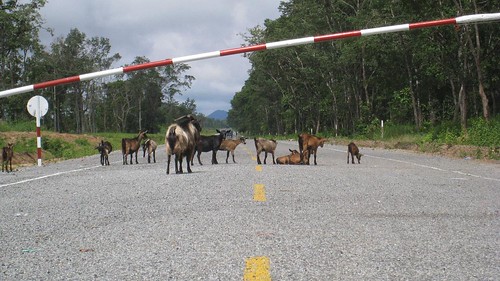 Officially, we got our exit stamps from the Cambodia office, and received our entry stamps from Laos, however we had to wait 45 minutes between the border gates for our new minibus. Classic!

Normally I don't or can't take photos at a border crossing, however between the herd of goats hanging out in the street, and the Laos official swinging around in a hammock under a shade tree, I had a mini photo shoot. Neither the goats, nor the border officials, raised an eyebrow. 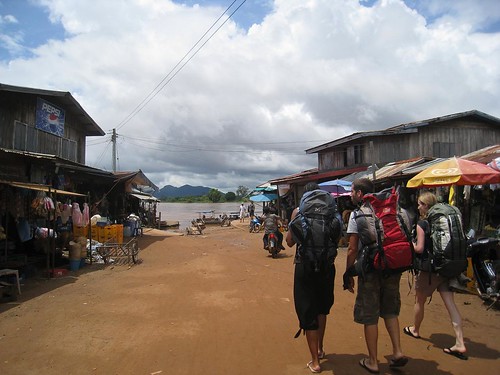 Our new minibus arrived after dropping off a group of tourists heading from Laos to Cambodia, and we got in for another hour's drive to the Mekong River. Once there, we were lead to a boat for the 10-15 minute ride to Don Det, a small backpacker haven. My initial impression upon exiting the boat was that it was like Gili Trawangan on a river. The main mud path through the village at the northern (tourist) end of the island was lined with small souvenir and convenience shops, restaurants, and a pair of internet cafes. 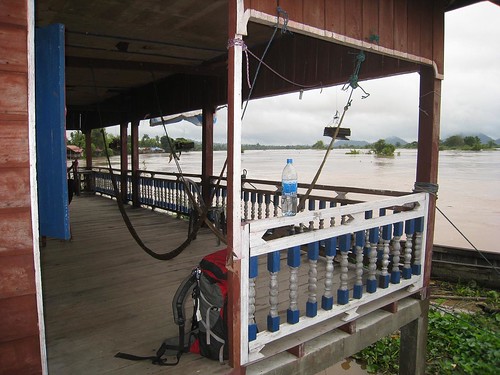 I joined the British couple at one of the first bungalows we came across on the sunset side of the island, while the French folks found a similar accommodation a little farther down. Like on Koh Phayam in Thailand, bungalow electricity was only available from 6-10 pm. We all regrouped in the evening for dinner and a few drinks at the restaurant tied to the French people's bungalow. As 10 pm rolled around, and it was lights out on the island, Justin, Cat and I headed back to our bungalows in the pouring rain. The paths were so muddy we removed our sandals so they wouldn't get stuck. The sensation of walking through the mushy mud paths in the dark was gross, as we were already aware of all the livestock in the area.