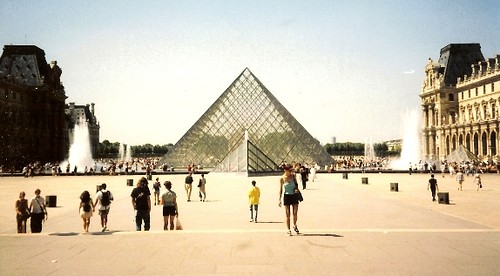 I woke up this morning with a need to get myself out of Paris. Unfortunately, my best option was the budget travel offices which were conveniently closed on Sundays. This means I'll have to stay another night. Then, I'm hoping to take the train to Calais, France and the ferry to Dover, England. Those white Cliffs of Dover better be great! Right before I woke up this morning, I dreamed I was pissing. I woke up to find I had relieved myself in bed. I had wet my underwear, sleep sack, and even the mattress a little. Thank God I wasn't wearing my shorts, they smell bad enough as it is.

I went to the Louvre today. I felt like a real insider when I entered through the metro entrance. It was only about a ten minute air-conditioned wait. Once inside, I was overwhelmed with the size of the museum. I decided to only see the paintings. By the end, there were only fifteen to twenty paintings that I thought were worth the trip. They were by Delacroix, Gericault, Raphael, Leonardo da Vinci, Vermeer, and a few others. The “Mona Lisa” was encased in a bullet proof glass case. I decided to move in for a closer look, and was appalled at the people. They were just taking pictures, and videos, without even spending a second to look at the painting. I can't even imagine how poorly the pictures would come out anyway (with the reflection of the glass and flashes). Ironically, right outside that room were four more da Vinci's being paid practically no attention (and there are only 17 in the world). Overall, I enjoyed the Uffizzi and the Museo d'Orsay more. 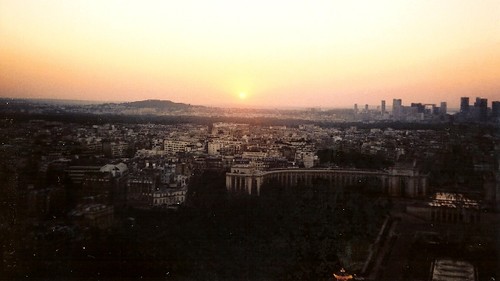 Sam and Dave should be flying home right now. Apparently all the Parisians are on vacation right now. The beggars here all seem to be women in robes with babies. It seems awful for the children. They are being used so badly. I went to Notre Dame around 3 PM, but services were still going on so I couldn't really walk around, plus it was really crowded. The whole front facade was under scaffolding too. I climbed the stairs of the Eiffel Tower only to find out the elevator to the summit was having technical difficulties. I watched the Parisian sunset from the second level. Now I'm down on the grass (park), writing. I kind of wish I had met someone for a picnic. The view of the Tower is picture perfect right now. I wish I didn't have to stay another night. Oh well, I'm going to leave Tuesday, no matter what. 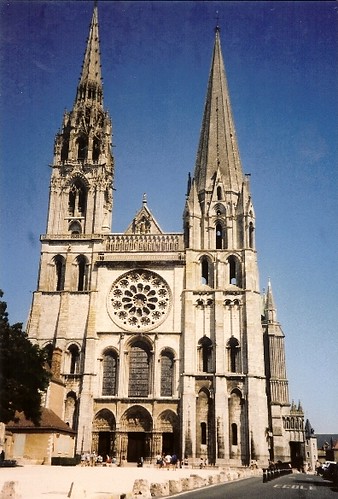 Today I made it downstairs for breakfast at about 9 AM. I was really only interested in the hot chocolate, but they had some type of cornbread that was really good too. After drinking two cups of hot chocolate, I started to feel the weird after effect. I'll probably just have one tomorrow. So I set out to try and find a budget travel office to buy a hovercraft ticket from. I spent 1 1/2 hours walking all over. Then, I went to a pay phone and bought the ticket over the phone (which I could have done from the hostel). So I'm definitely learning my lessons the hard way.

Now I'm on a train to Chartres. Only a few windows are open, and I'm not near them. It is bloody hot! And, I'm really starting to stink between the heat and my dirty clothes. Chartres Cathedral was so dark and cool, it felt air-conditioned. The only source of light was the numerous stained glass windows. I took the tour with Malcolm Miller (scholar, author). I probably could have tagged around without paying, but I'm too honest. Today is supposed to be the hottest day in the past hundred years for this region of France, 106 degrees Fahrenheit. I know its hot (but I can't tell if it is to that degree). I got my hovercraft ticket, but the pressure is on to find out when a train leaves for Calais (the departure point).

I got the ticket to Calais quite easily, then I was feeling happy. I went to the McDonald's across the street and got my McRoyal with cheese. I felt like a jolly American again. I also felt like I was in a “Pulp Fiction” dialog. Either way, I didn't feel witty. I went down to the bathroom, and realized (at the urinal) that I was standing in a pool of piss. I moved my business to the toilet, and got out of there. Back to the hostel. My new roommates were all American girls except for one French guy. The Texan girl mentioned her boyfriend before I even realized I liked her. Well, I enjoyed talking to her. Four beers later, I was asleep.