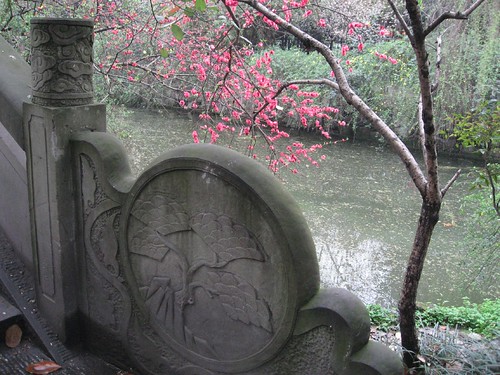 I picked up my e-ticket to Kathmandu at Sim's Guest House travel desk and grabbed a taxi to the People's Park in central Chengdu. The Lonely Planet spoke highly of it, and I was surprised by what I found.

For a Thursday afternoon, the park seemed quite crowded. As I started to take photos of some flowers near the entrance gate, a Chinese woman asked for a photo of me. I was happy to oblige, though it still felt funny. Soon after, a 70-year old Chinese man came up to me and confirmed his hunch that I was American. We walked around together for a bit, as I was thankful to speak with a local who knew enough English to carry on a regular conversation. He indicated a lot of the people in the park were retired. He asked for a few photos with me, and I'm embarrassed to admit that I was suspicious of the idea. As he lead me toward a photo vendor, I imagined the photos would be taken, and I'd be expected to pay for them. In reality, he wanted them for himself, and asked for my home address so he could send me one too. 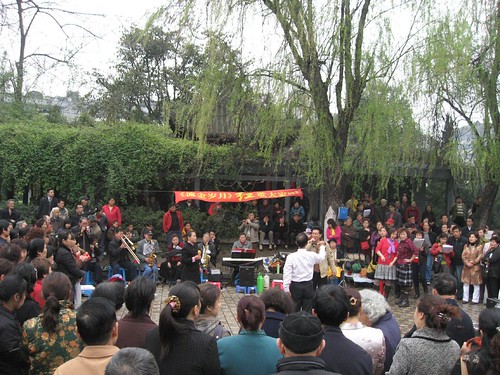 Large groups of men and women were dancing, people were singing full-on karaoke with mics and speakers, performance artists were putting on dancing and singing shows with large audiences gathered around, and of course people were drinking tea and playing card and board games. I found the atmosphere fascinating.

Eventually, I sat down by a pond and ordered “Snow on Green Lake Jasmine Tea.” When it arrived, there were white flower petals floating on top of the green tea with the leaves resting at the bottom of the cup. It was quite a sight, and a more apt name could not have been given to it. I continuously refilled the tea cup with the hot water from the provided thermos. A little Chinese girl at the adjacent table befriended me, offering an endless supply of sesame seeds and drool. 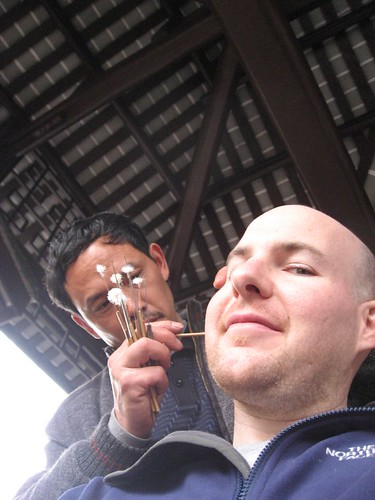 It didn't take long for a guy to come over and offer to clean the wax out of my ears. I tried to bargain with him but he wouldn't budge on the price. I caved because I was curious to give it a go. Having a strange man stick metal and small pipe-cleaner type brushes into your ears in public is an odd experience at best. As he was poking around, I realized I was letting this random guy mess with my hearing. One slip and I'd have a punctured eardrum, but it was too late. He used what seemed to be a tuning fork at the end of each ear cleaning.

I'm going to stick with Q-Tips.