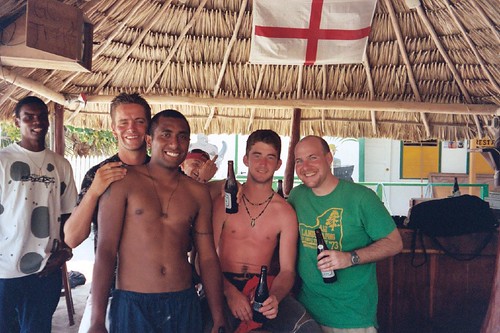 The Panty Ripper, Singapore Sling, and Cuba Libre reflect just a few of the tasty libations which await travelers abroad. As for me, I tend to seek out and enjoy the national beers of the countries I visit (Imperial, Belikin, Heineken, Guinness). Taking shots is a drinking experience I (thankfully) left behind in college….or so I thought!

I was hanging out with some British army troops on my second night in Belize when a girl with us suggested we drink some tequila. Normally, I'm not a fan, however I sucked down the first shot to fulfill my duty to the group. When it came time for the second shot, it was suggested that we do a special combination move (I forgot the exact name). You may know the classic approach to tequila shots as licking the salt from your hand, taking the shot, and putting a lime wedge in your mouth. Well this special approach involved snorting salt, taking the shot, and squeezing lime juice into your eye.

I can be very stubborn at times, and I made sure to assert myself at this point in the night. The girl even tried to bribe me with a view of her underwear if I'd take part. Unless she intended to up the ante, I was content to watch.

that shot that you pu55y-ed out... I did it, its called Tequila Suicide.  If you do it with Whisky, it's a StuntMan Shot.   And FYI, the lime in the eye was NOTHING compared to the line of salt.

I am not a drinker but I'd love to try some adventurous drinking escapade!

Hard-man Tequilas...you only do them once. I remember having to deal with a Panty ripper aftermath from one big night on Caye Caulker - real nasty - proper hangover from hell. After a few days I once again succumbed to the alcohol, but this time plumped for the Green Lizards - by god, I wish I'd stuck to the Panty rippers... Worst drink? Banana wine, Laos. It was actually quite tasty - a bit like flat, sicklier version of kiddies pop - but that was the problem. I drank it like pop. Potent n tasty ain't the best combo when it comes to booze. It went down far to easily and suddenly hit me like an express train. Before I knew what was going on I had the motor skills of a 1 year old combined and the eloquence of a tin of paint. And the hangover? Were talking a Panty Ripper/Green Lizard equivalent to a National Euro-Lottery bonus double rollover. Never, ever again.

Ahh....the Green Lizards by The Split (in the island). Those were neon green during the day, as though they were nuclear! I saw quite a few guys get drunk off of them, and put back a few myself.

I'm not even sure I tried a Panty Ripper, however I did bring home a litre bottle of the One Barrel Rum (coffee-flavored)!

Clearly I would never show my underwear!

Oddest drinking combination has to be in Flores, Guatemala. While we were walking along the street we were invited into what looked like this blokes front room, but which turned out to be his own personal drinking den. A total sausage party and we lowered the average age by about 50 years. There was only one drink on the menu: home brew something (yep thats the best I can do). There were no mixers - just a half litre of liquour and half an orange. Our new best friend quickly ran out of oranges (yes this really wasn't a tasty drink) but compensated by going out back and digging up a radish. No the drink did not taste better but will never ever be forgotten.

A radish? That's out of left field.

The nastiest thing I ever had was a Prairie Fire. It's just tequila and Tabasco sauce. Simple to make and not especially exotic, but goddamn is it disgusting!