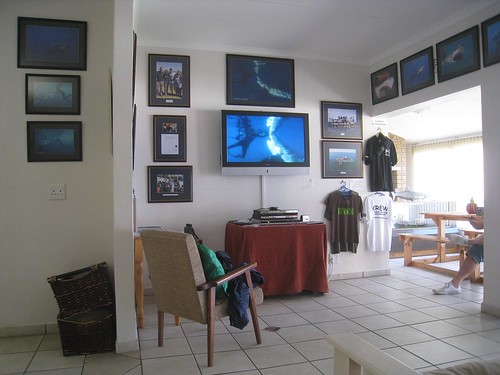 The Shark Diving Unlimited shuttle picked me up at the crisp hour of 6:40am from Moby's. An older couple was already on board, and we quickly left Hermanus for the Great White shark capital of Gansbaii. A buffet breakfast of eggs, toast, muffins, cereal, yogurt and drinks greeted us at the office overlooking the harbor from which we would launch. The walls were filled with framed photos of Great Whites, and even a few shot of the crew with celebrities such as Brad Pitt (3-time visitor), Leonardo DiCaprio, and Prince Harry. 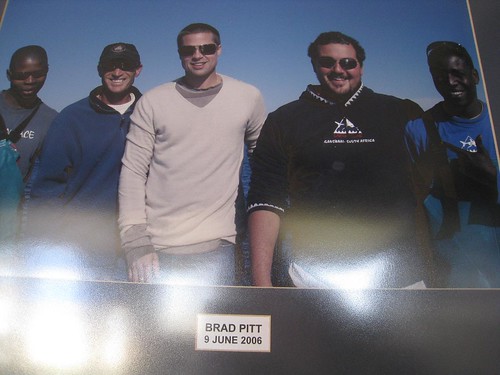 A DVD started up on the big plasma TV. It was a documentary about the company's founder trying to induce a sleep-like state known as ” tonic”? on the Great Whites. The boat on the show was the same boat we'd be taking, the Barracuda. As we ate, and watched the documentary, payments were made and another two or three people arrived. It seemed odd that we were making it through the whole documentary instead of leaving once all the clients arrived for the trip. 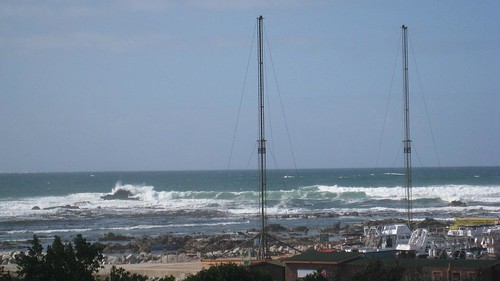 And then we were informed the 5-meter swells crashing into the rocks around the small harbor were too dangerous, and they were only getting bigger. The boat could handle them, but we were assured the clients could not. After refunds were issued, the shuttle returned us to Hermanus. I was told to have Moby's call the company at 5pm for an update on trips the next day. At 5pm, the company told us they'd have to wait for the weather report the next morning. 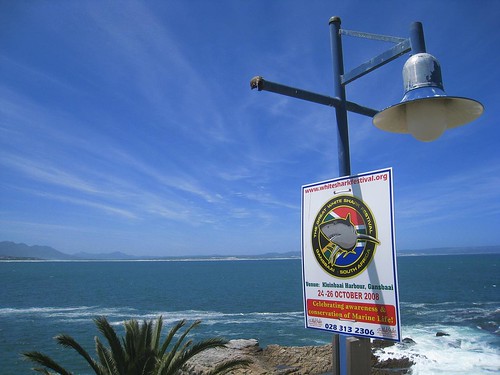 I awoke at 7am to the tune of winds whistling outside the window. From the third floor, I could see whitecaps on the water, and was resigned to the news which soon came that there would be no trips for the second day straight. Unlike others with limited time, I was not leaving town until I got in the water with the sharks. Weather reports looked good for the following day, and I was given a later pick-up time of 9:40am. 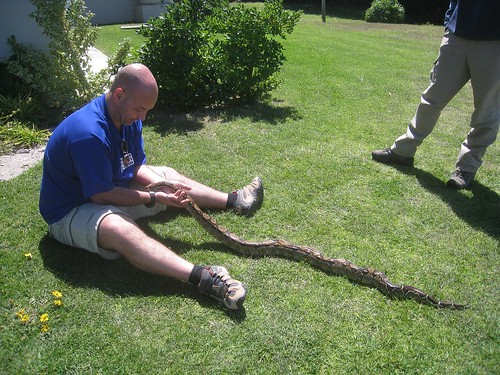 On the third morning, the sun was shining, the wind was light and the waters were calm. I was picked up by a packed shuttle. In all, sixteen clients were being taken out in the afternoon trip, a big difference from my first day (the boat has a capacity of 19 clients with 4 crew). Going through the motions, we ate, paid, and watched the documentary. And again, we made it through the whole DVD while impatience grew. The morning trip wasn't seeing sharks. They were apparently skittish after the stormy weather of the past few days, and weren't coming around the boat. I think the only thing worse than getting up early and to the office only to have a trip canceled is making it to the point of throwing bait out and not seeing sharks!

Around 11am we received good news – the sharks had finally arrived and our turn to dive with them was within sight.