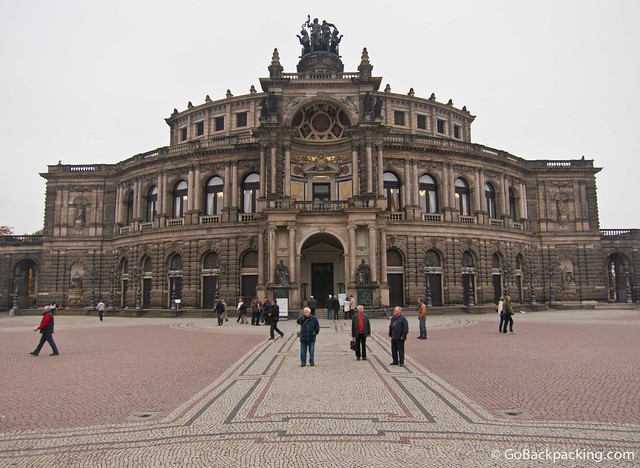 During my travel through Germany last year, I celebrated Oktoberfest in Munich and marveled at the architecture of Berlin. I was pressed for time but wanted to squeeze one more city into my visit.

Heeding the advice from Go Backpacking's Facebook page, I visited Dresden for a few nights, en route to the Czech Republic.

Despite nearly being bombed to oblivion toward the end of World War II, the historic buildings were all reconstructed. Today, given the attention to detail, you'd hardly know the difference.

The city's historic center is compact, making it easy to cover most of the highlights in a single day. Here are my top 5 things to do in Dresden.

The plaza outside the opera house, Semperoper, is an excellent spot to begin a walking tour of downtown Dresden.

Casual visitors will appreciate the rich exterior design, while culture vultures can take a 45-minute guided tour ($12) to learn about the history and acoustics of the Semperoper. Tours are offered in both English and German.

And of course, opera and music aficionados can always purchase a ticket to one of the varied nightly performances. 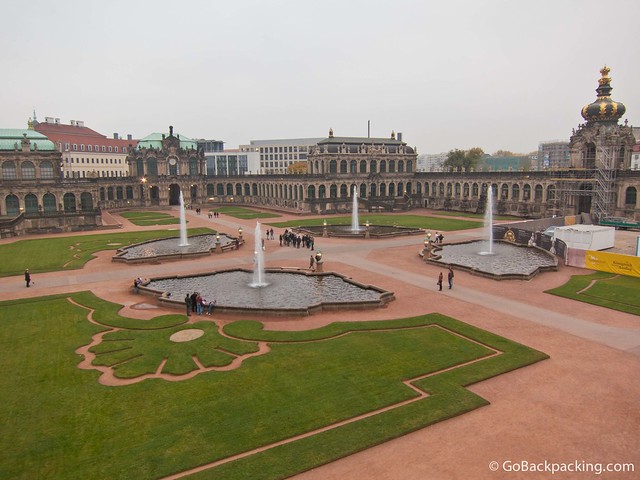 Adjacent the opera house is the Zwinger Palace, which was my favorite site in Dresden.

Aside from the ornate exterior, designed in the Baroque style, it boasts the Gemäldegalerie Alte Meister (Old Masters Picture Gallery, $13 admission), which houses a priceless collection of Baroque and Renaissance art.

Far and away the best-known piece of art in the collection is the Sistine Madonna by Raphael, with its often-reproduced pair of angels at the bottom.

Being a student of the Italian Renaissance in college, it was both a surprise and pleasure to find Dresden houses such a world-class collection. 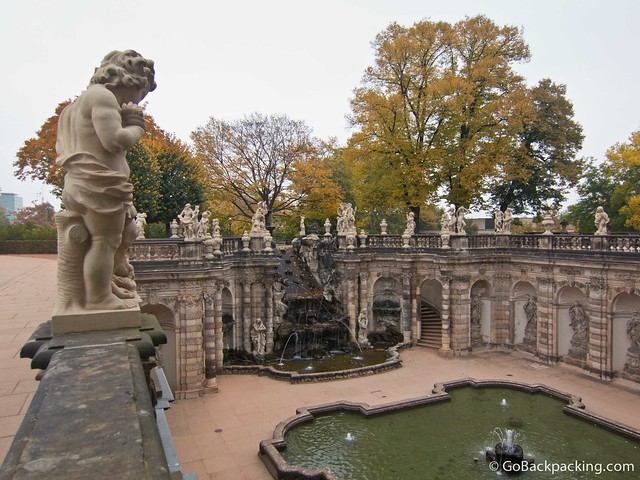 The palace also features the Dresden Porcelain Collection, one of the world's largest.

Don't miss the Nymphaeum, an enclosure with featuring, you guessed it, loads of nymphs. It's one of the most exquisite Baroque fountains in Germany. 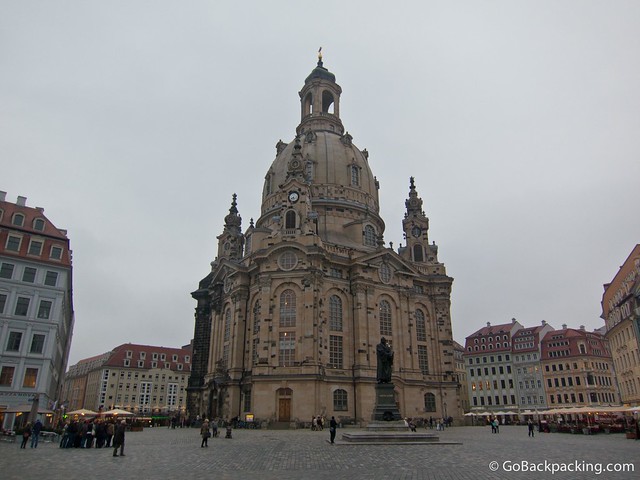 3. Climb the Church of Our Lady (Frauenkirche)

Situated in a large open plaza, the Frauenkirche offers 360-degree views of Dresden from its roof. 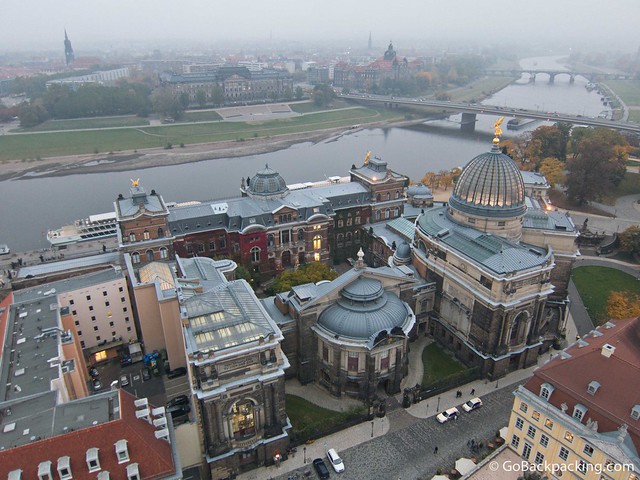 Even on a grey and dreary Fall day like the one I had, it was worth the $10 admission to get a bird's eye view of the city.

Hopefully, you'll have beautiful blue skies when you visit. 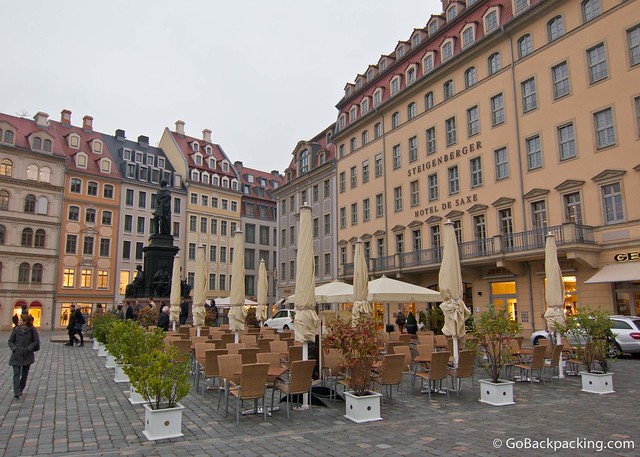 Restaurants in all directions surround the Frauenkirche, and thus it makes the perfect place to grab lunch or dinner.

It's here that I began to imagine how pleasant the environment would be in the Spring and Summer, when a mix of Germans and tourists are all out drinking coffee or beer, and enjoying the local cuisine. 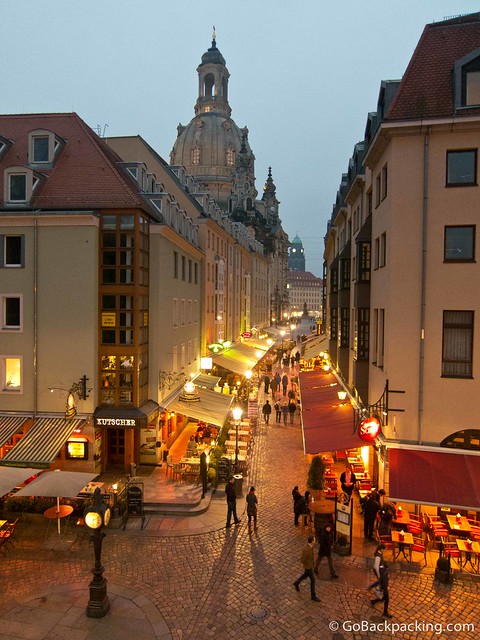 Alas, I was here as the city verged on what I imagine to be a bitterly cold Winter.

I was drawn into the warm glow of a restaurant-filled side street near the church. Gas heaters were in full effect. 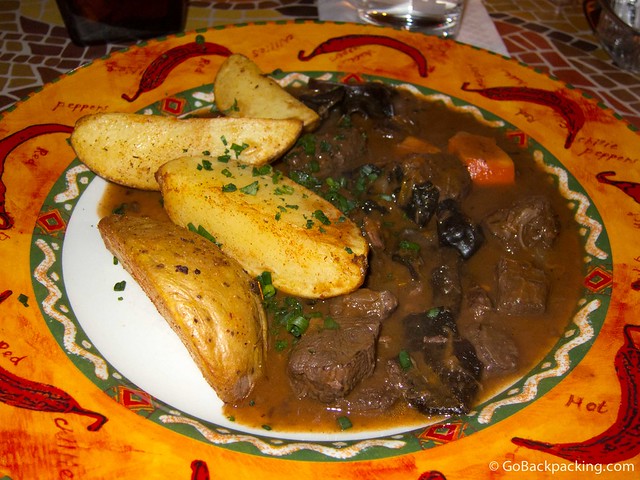 Goulash of emu with potatoes

After casing the alley several times, I settled on Ayers Rock, an Australian-themed restaurant.

I ordered the pumpkin cream soup refined by ham and cranberries ($5) to start, followed by a goulash of breeding emu, served with potatoes ($21). 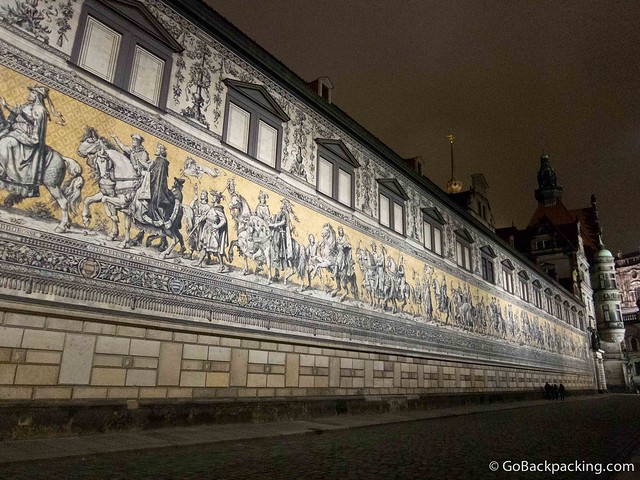 5. View the Procession of Princes (Fürstenzug)

After dinner, on my way back across the river to the hostel where I was staying, I happened across the Procession of Princes, a 101-meter long mural depicting a procession of the Wettins, Saxony's ruling family in the 1870's.

My first impressions of Dresden were quite positive, and my Spidey senses tell me it'd be a city I'd enjoy for at least a few weeks, if not a few months, during a warmer time of year.

My travel to/from Dresden, Germany by train was made possible by a Global Eurail Pass, courtesy of Eurail.com.

Few years ago we were in Munich on Oktoberfest. I can't forget it, the best beer in my that I ever drank, but maybe I was just thirsty :)). Anyway currently we are traveling through Croatia and planing to continue to Czech and Germany (Dresden). Really love to walk around Dine al Fresco because we are also food-lovers want to try different foods and cuisines. Then we can continue to Munich once again :))

Thank for the Dresden Tips. I will be there in one month and already really exhiting whats going on over there. Cheers Julian

I'm sure it's much more fun in Spring!

One place people might enjoy going is the beautiful Pfund's Dairy (Molkerei). It's a beautiful building and sells wonderful treats...like ice cream or cheese to eat in or take out.

we plan to visit Dresden end of August for only about six hours 9: am to 2 PM. any ideas how to use the time most producitvely? it is ston the way prague op

Everything I listed here can be done in a short amount of time because the historic city center is so compact.

Metodija from The Beauty of Travel

Last year we travel to Prague 1600km just to see a Pearl Jam Concert. Anyway I`v heard about Dresden, and since it was close we went there.. Let me tell you this city is sooooooo beautiful we really fell in love in it and enjoyed in every minute while we where there. Great city with amazing architecture. Thank you for bringing back some great memories! :)

Cool, glad it brought back some memories. I use to love Pearl Jam back in the my "grunge" days :)