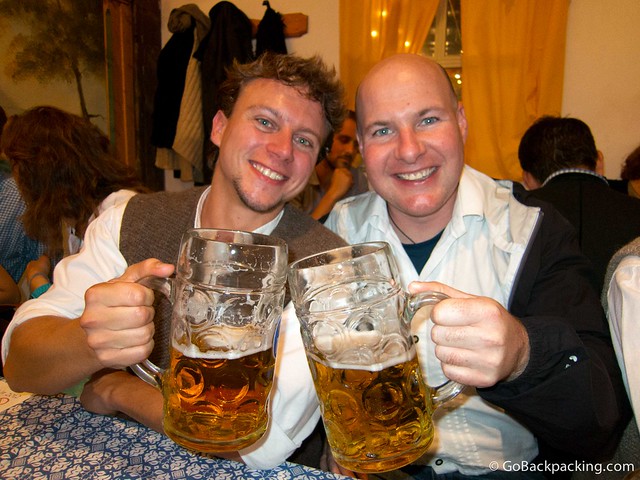 Every year, over 6 million people descend upon Munich, Germany for the annual Oktoberfest celebration.

Based on attendance alone, this celebration of Bavarian beer and culture has been dubbed the world's largest party.

Held annually since 1810, locals refer to the event as “Wiesen” after the name of the fairgrounds where it's held.

When I made the decision to attend the blogging conference in Costa Brava, Spain this past September, it was a no-brainer to tack on a trip to Munich afterwards.

I began asking questions the week before I arrived. This post is a culmination of the advice I received, along with my own observations.

Accommodation: Planning Ahead vs Just Showing Up

There are two distinct approaches to attending Oktoberfest. Either you plan everything months to a year in advance, or you just show up and see what happens at the last-minute. Both strategies have their advantages and disadvantages.

Reserving accommodation, whether it be at a hotel or hostel, and buying tickets to the beer tents months in advance, ensures you have more control over your experience. It also locks you into those plans because you start making financial and vacation commitments early on.

On the flip side, playing it by ear allows you greater flexibility to change your plans last-minute should you decide to alter the dates of your visit, or bail out altogether.

Whichever approach you prefer will lead you to the same park in Munich with tens of thousands of other partygoers on any given day.

Heading to Munich? Book your hostel in advance here

I connected with one of my first friends from Medellin, a German couchsurfer by the name of Martin, with whom I shared an apartment for three months in 2009. While he was still traveling, his younger brother was living in Munich. Score!

I contacted Maxi, and he welcomed me to stay with him for the Oktoberfest. With free accommodation squared away, I confirmed my plans to go, and bought a flight from Barcelona on Vueling for $170.

To save money on accommodation, try to find a place to stay through Couchsurfing, or use my approach above, which is to find a host through your personal network of friends.

Alternatively, if you can't find a room within your budget, you can stay outside of Munich, and commute in by train for the party.

How to Dress, Bavarian Style

To help set the mood, many Germans dress up in traditional Bavarian clothes.

The men where lederhosen, which are those green or tan, deerskin shorts you see the Von Trapp kids wearing in The Sound of Music. Button down shirts are either white, or a colorful checkered pattern. Brown shoes or boots are worn, along with thick wool socks.

Women wear dirndls, a cute outfit with peasant origins, that consists of a bodice, blouse, skirt, and apron. Typically worn with stockings and flat shoes, some girls dress them up with high heels.

A properly fitted dirndl emphasizes a woman's waist and bust. I also heard women can get special bra's to further accentuate their cleavage.

Cheap, single use lederhosen or dirndls will cost at least $130 (100 Euro), while better quality, custom tailored outfits can easily run $500 or more.

It's common for these outfits to be passed down through the generations. I met one guy in the beer tent whose lederhosen was 70 years old, passed down to him from his grandfather. The higher quality lederhosen of yesteryear are thicker than the modern versions.

I was advised early on to invest in a lederhosen, lest I be the only guy dressed in civilian clothes. But upon arriving in Munich, I was too tired to bother, and didn't want to spend the money on an outfit I'd only wear for a few hours.

During my first walk through Oktoberfest, I noticed tons of people, both men and women, German and foreign, in regular clothes.

Of course there were lots of people in the lederhosen and drindls too, but if you wear regular clothes, you'll by no means be the only one. The second time I went, Maxi lent me one of his white shirts, which made me feel a little more Bavarian for the night.

Guys – invest in the lederhosen if you want the pictures as a souvenir, or a future Halloween costume.

Girls – you should all wear the dirndls! If Bavarian women wore them all year, I'd be making plans to move to Munich right now.

Outside the Beer Tents: Park and Rides

Oktoberfest is held at Theresienwiese, a large fairground located a 15-minute walk from the city center (Marienplatz), and easily accessible via several subway stops.

The grounds are essentially a giant amusement park, with several roller coasters, a giant ferris wheel, and enough rides that spin you around to make anyone dizzy just from watching.

You pay for the rides individually, with some costing as much as a liter beer in the tents ($10-$12).

There are also tons of German food shops serving up pastries, pretzels, and traditional sweets.

Mixed amongst the rides and chaos are 14 large beer tents, each of which is a party unto itself.

If the weather is clear, then it can be more fun to be outside, but if it's overcast or raining, it can be a miserable experience unless you're sitting in one of the beer tents. Ideally, you'll be staying in Munich over the course of several days, so you can skip the bad weather days.

During my first walk through the grounds, on a Saturday afternoon, the crowds were thick and walking at a normal pace wasn't always possible. Then it began to rain, and I retreated to the subway.

I wasn't interested in the rides, but  was hoping to get more photos and enjoy the atmosphere a bit longer.

To give you an idea of the food costs, five chocolate covered strawberries ran me $5.

Inside the Beer Tents

The tents, and I use that term loosely because they're actually very stable, solid structures, are sponsored by various beer companies in Munich.

You don't need a reservation to enter a tent, just as you don't need a ticket to enter the fairgrounds, however it can be very difficult to find a seat during peak days and hours (evenings and weekends).

If you want to plan ahead, you can reserve tickets through the individual tents' websites. As a bonus, reserving tickets in advance may get you discount coupons which can be used toward beer and food.

I was happy to find the tents are smoke free, allowing everyone to breathe easy, and leave without smelling like an ashtray at the end of the night.

The rotisserie chicken came highly recommended, and when I got my paws on it, I found out why. It's lives up to the hype!

Each tent has its own menu, and beers of course. They also have their own personality, based on the interior decor, live band, and type of people they attract.

For example, the Käfer's Wies'n-Schänke tent is known for attracting a wealthy and famous clientele, while Hofbräu-Festzelt, the largest tent, draws a lot of Americans.

Speaking of Hofbräu-Festzelt, this is the tent where Maxi and I went to meet members of his orchestra, who had reserved a few tables for the night.

We walked right in around 6 PM on a Sunday evening, and found them in a numbered room almost immediately.

Squeezing into the middle of a table, I was soon amongst a large group of musically talented Bavarians. I was able to chat a bit with Maxi, of course, and the conductor, who also spoke a little English.

Because getting in and out of the tables required climbing on the benches, I made it a point to not need the bathroom until we were back at his apartment. Maxi would later tell me the restrooms were on the exact opposite end of the tent from us. Thankfully, I didn't have to bother trekking over there.

The waitresses were friendly, and if you don't tip them, they're known not to come back and serve you. But the tips are usually about a dollar, rounding up the beers to the nearest Euro.

Fun Fact: According to Maxi, a waitress in a good location can earn $25,800 (or 20,000 Euro) during the festival. They make money not only from tips, but per beer they sell.

I noticed other working women in dirndls who were walking the aisles, selling giant pretzels, and even roses (there's always someone selling roses isn't there?).

As the evening wore on, the live band switched playing traditional Bavarian tunes to rock, pop, and Top 40 songs. I distinctly recall “YMCA” by the Village People going over well with the crowd.

It was the rock and pop music, in English for the most part, that got the crowd standing up on their benches dancing.

The beer, at the end of the day, is what Oktoberfest is all about. And not just any beer can carry the label. Bavarians take this topic seriously.

Only the large breweries based in Munich, brewing the beer during the Oktoberfest season, can call it Oktoberfest beer.

At around 6% alcohol, it's twice as potent as the average American beer. And because it's served in 1-liter glass mugs, you're actually getting about 33 ounces per serving (or close to three times the volume of a typical 12-ounce American beer).

Do the math, and you'll see it's no surprise why the beer has a reputation for being especially strong.

That said, the Bavarians grow up drinking beer from a young age. The minimum age for beer and wine is just 16 in Germany (and 18 for liquor). This explains why some of the girls looked like they could be my daughter.

The whole scene inside the tent, while festive, was not nearly as messy as your typical college frat party.

Prost (cheers in German) to that!

Another tip I received before arriving in Munich was to drink the beer slowly. I followed this one, consuming just two mugs of the Oktoberfest beer over the course of about five hours. Each beer cost 9.35 Euro, or about $12, which we rounded up to 10 Euro with tip (or close to $13).

The last call was around 10 PM, as the band played its last songs for the night. The waitresses began cleaning up by 10:30 PM.

Needless to say, I was feeling good as we exited the tent, but it wasn't until we got back to Maxi's apartment, and I lay down, that I realized just how much of an effect the beer was having on me.

Summary: How to Crash Oktoberfest in 10 Simple Steps

2. Book a hotel or hostel months in advance, or begin asking your friends, and extended network for a person you can stay with in Munich.

4. As the date draws near, begin putting the word out via social media of your attendance. See who responds, and refine your plans accordingly.

5. Arrive in Munich, and settle into your accommodation.

6. (Optional) Buy your traditional Bavarian outfit: lederhosen for the men, drindls for the women.

7. Withdraw cash from the ATM in accordance with your appetite for beer, chicken, and roller coasters (not necessarily in that order).

8. Take the subway to one of the stops near Theresienwiese, or walk from Marienplatz if you're staying downtown.

9. Ride the rides, and eat the food. Try not to puke on anyone.

10. Bust into a tent, with or without a reservation, and DRINK THE BEER!