View of Reykjavik from atop Hallgrímskirkja, the largest church in Iceland

[I]celand's capital city, Reykjavik, is the perfect base camp for exploring the island nation.

The sheer number of activities on offer by the tour companies can leave your head spinning, but most can be done as half or full day trips from the city.

The ability to rest your head on the same pillow every night can be a welcome relief for the travelers constantly on the go.

Renting an apartment can be a great alternative to hostels or hotels. In the past, I've used companies such as Wimdu to find short term apartment rentals.

I took this approach during my recent, 10-day visit. On the days when I didn't have an activity booked, I walked around Reykjavik, getting to know Iceland's quaint capital.

Read on for 5 of my favorite things to do in the city. 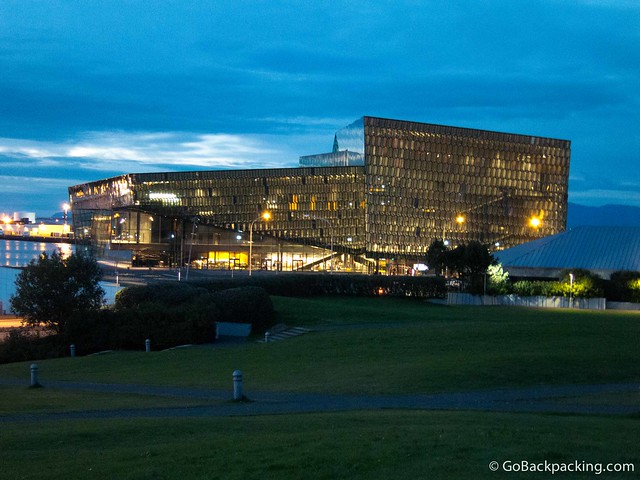 Day or night, a walk inside the new Harpa concert hall is a fascinating experience

5. Pretend You're In An MC Escher Drawing at Harpa Reykjavík

Address: Austurbakki 2 (along the harbor)

Opened in May 2011, the Harpa concert hall is a modern, steel and glass structure situated along the city harbor.

Harpa is home to the Iceland Symphony Orchestra and Icelandic Opera, but you don't need to attend a performance from either to enjoy the architecture.

Step inside the building, and you'll be transported into one of those MC Escher drawings where the stairs (in this case escalators) seem to go off in all directions. Take the elevator to the top floor for a different perspective.

Don't be afraid to linger. There's a small cafe on the ground floor offering drinks and desserts, thereby allowing you to soak in the atmosphere of this unique space. 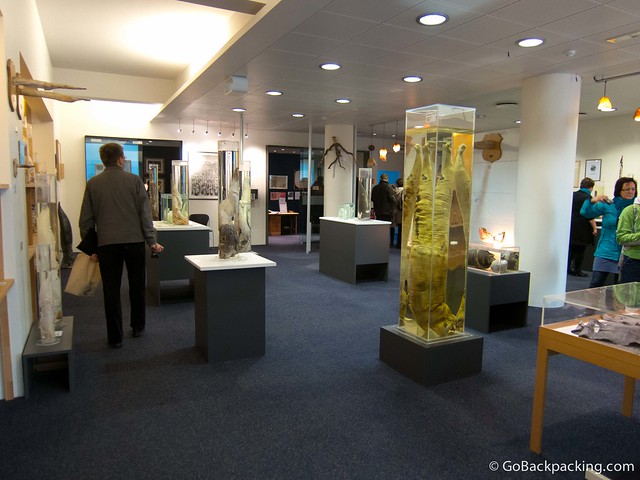 4. Visit the (World's Only?) Phallological Museum

Yes, “phallological” is the scientific way to say you're visiting a “penis” museum.

But once you get over any residual embarrassment  you'll find you're not alone in feeding your curiosity about the size of a male humpback whale's reproductive organ.

Speaking of whale penises, they dominate, not only in size but in quantity. Perhaps that's because they are the key attraction.

More interesting to me were the ones belonging to mythical creatures, like a “merman” and from the elves that are believed to live in the hills of Iceland. 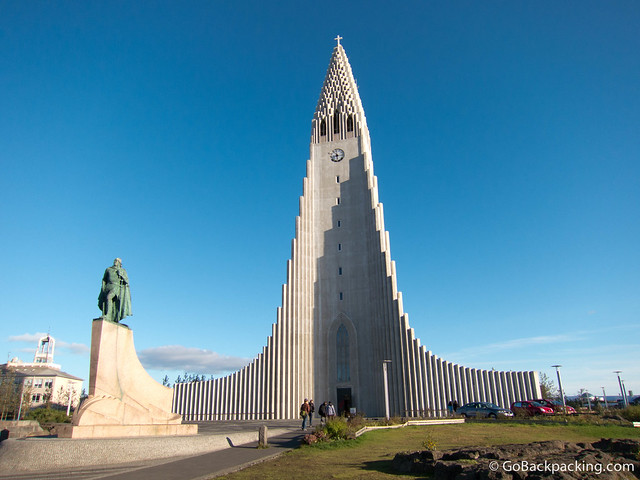 Hallgrímskirkja, the largest church in Iceland

3. Take in the Scenic View from Hallgrímskirkja

Address: Top of Skolavordustigur Street (or just look up from anywhere in the city)

Perched on a hill in downtown Reykjavik, Hallgrímskirkja is Iceland's largest church.

For a few Euro you can take an elevator to the top of the 73-meter high spire for 360-degree views of the city and coastline.

The interior of the church itself is rather sparse, but worth a look if only for the massive pipe organ situated over the entrance. 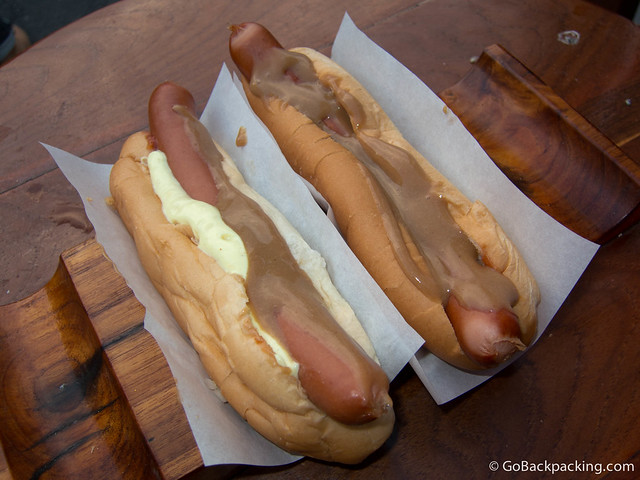 Icelanders are very proud of their hot dogs, which are often referred to as the national food. The best place in Reykjavik to grab one or two is Bæjarins Beztu, which operates a small stand downtown, near the harbor.

Seriously, this hot dog stand is so small I walked straight by it the first time I tried to find it.

The hot dogs, which have been eaten by former President Bill Clinton, and Metallica's James Hetfield, are also amongst the cheapest food you'll find in the city, and Iceland for that matter.

Toppings include: ketchup, sweet mustard, raw onion, fried onion, and a mayonnaise-based sauce with sweet relish. Order “the works” to get everything (as pictured above). 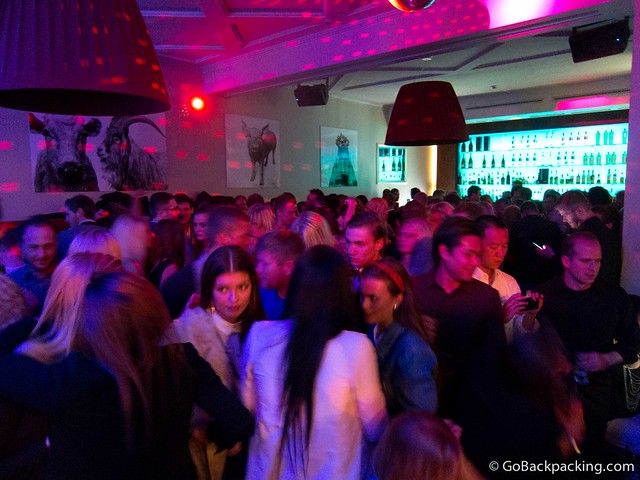 Inside B5, one of Reykjavik's most popular clubs, on a typical Saturday night

1. Drink the Night Away on an Icelandic Bar Crawl

Address: The B5 club is located at Bankastraeti 5

Reykjavik's downtown area, where all the tourists stay, is also the most popular nightlife district in the city. It's low key Sunday through Wednesday, with the partying reaching an epic climax every Saturday night.

On this night, Icelanders dress up regardless of the cold and hit a series of bars and clubs. Because the city is so small, it's easy to from one venue to the next, even if it's cold, or in the Winter, snowy.

At B5, a popular club which is more like a big bar, the patrons dress up. It's the first time I've seen men wearing suits, and even tuxedos, at a club. And the young women live up to their reputation of being quite stunning.

Icelanders love to stay out late, and speaking from experience, get completely smashed in the process. I didn't arrive back at my hostel until 6 or 7 AM Sunday morning. You've been warned!

What's your favorite thing to do in Reykjavik?

This post was written by Dave, and brought to you by Wimdu.

Árbæjarsafn in Reykjavik is also worth seeing

Per Zagat, "This open?air folk museum, a 15?minutes drive east of the city center, is a re?created historic village built around a traditional farm."

Thanks for the suggestion.