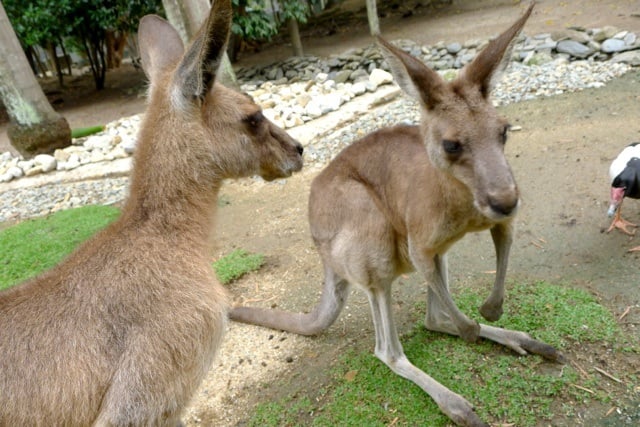 [A]nyone can go and see the Australian native wildlife in a zoo or secure habitat, but isn't the experience much more exciting when it happens out in nature?

I know when I first arrived in Australia, I was ecstatic to see some kangaroos out at the Sydney Taronga Zoo, but nothing compared to the morning I woke up in a cottage in the Hunter Valley with dozens hopping about in the front yard.

Australian animals are iconic, and they are a big part of the adventure for travelers down under. If you want to see some of the country's iconic wildlife out in their natural habitats, here is where to look.

I'm not joking… they are everywhere. If you grew up in a place where deer were a nuisance, then you'll know what I mean. It is to the point where many Australians consider them a pest of sorts.

Just getting outside of Sydney city, you will have a chance at encountering a kangaroo in the wild. The lands around the Hunter Valley wine region (the region nearest to Sydney) has heaps of kangaroos, and if you want to head south from Sydney, you can catch kangaroos on the beach at Pebbly Beach.

Then, of course, there's Kangaroo Island in South Australia.

When you head towards the dry and arid regions of the Outback, you will notice more red kangaroos bouncing around. These are the largest kind of roos, and marsupials for that matter, reaching sizes comparable to adult male humans, so please keep an eye on the road when you're driving as they will do some damage.

Not funny: When I told my boyfriend I'd be writing this article, for kangaroos, he said just to tell them to look on the side of the road. He was referring to the time we drove to Broken Hill (the Outback) and counted 25 dead ones that had been hit by cars. So sad. 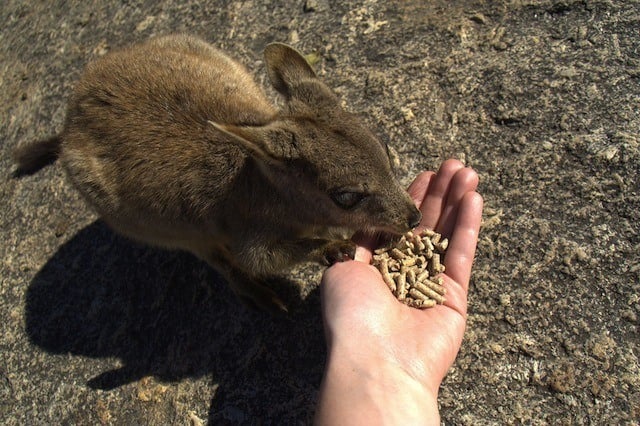 Wallabies are smaller versions of kangaroos, and they inhabit most all the same places, meaning pretty much anywhere in the country.

However, there is one special type of wallaby that can't be found everywhere: the rock wallaby.

Of all the wallaby types, these are the smallest and the cutest (trust me) kind of wallabies that are only found in areas of cliffs or loose boulders. Although rare, I have seen, petted and fed these cute creatures at Mareeba, Queensland and on Magnetic Island, also in Queensland. 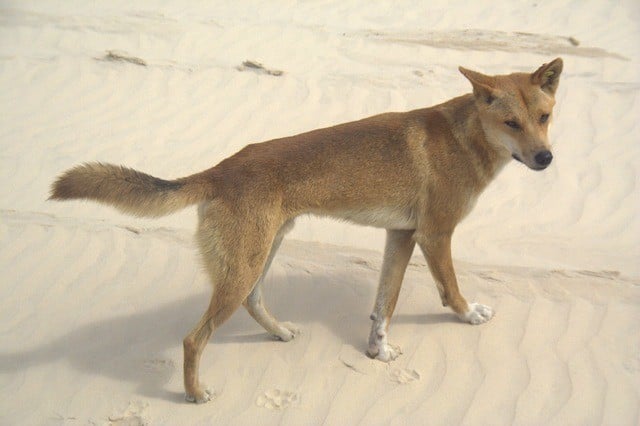 A dingo on Fraser Island.

That's actually a true story. So, while these beautiful dog creatures look like something you want to run up and play with, don't.

Dingoes are said to be most closely related to the Asian grey wolf, and they have a violent side to match.

If you want to see dingoes in the wild, they are predominantly found in the Outback, but Fraser Island has a healthy and managed population as well. 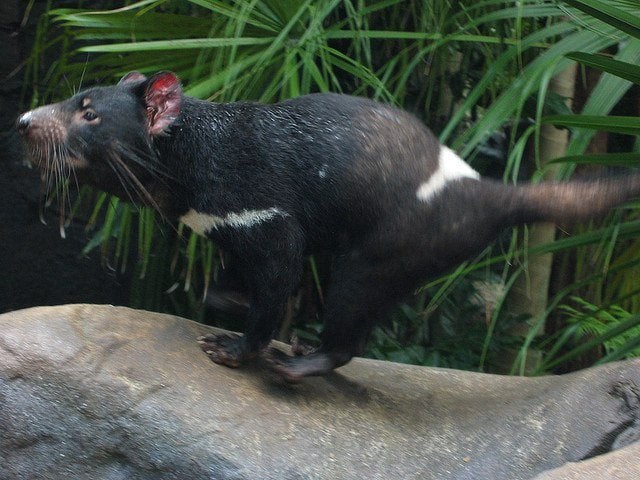 As the name suggests, the Tasmanian devil is found only on the island of Tasmania, except for in zoos.

These little marsupials have the ability to turn vicious at the drop of a hat, so if you do run into one, keep your distance.

However, chances of that happening are dwindling now that the species is at risk because of a facial tumor that is transmitted to other devils through biting – a normal part of the common fighting process. 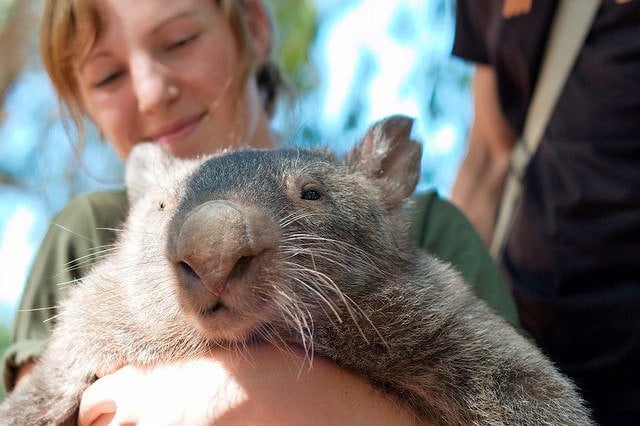 Holding a wombat: I do not recommend doing this. (photo by christianhaugen)

The wombat is another marsupial, but this one comes with a very stocky appearance. With stubby legs, these hefty little guys manage burrow in the ground and tend to only make it on land at night.

Seeing one in the wild is much rarer than a kangaroo or koala, especially because they are nocturnal. 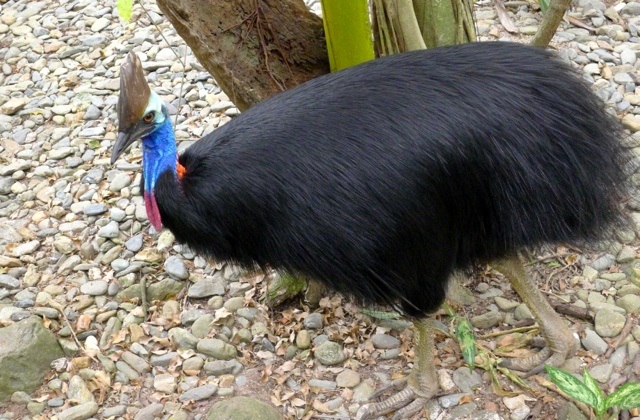 The flightless bird, the cassowary, resembles a cross between an emu and a dinosaur.

It inhabits the area of northeastern Queensland, especially around Mission Beach where cassowary signs can be seen on the sides of the road warning people to drive slow and watch for the bird.

If you do encounter a cassowary in the wild, it is wise to keep your distance as their feet have giant claws that can slash. 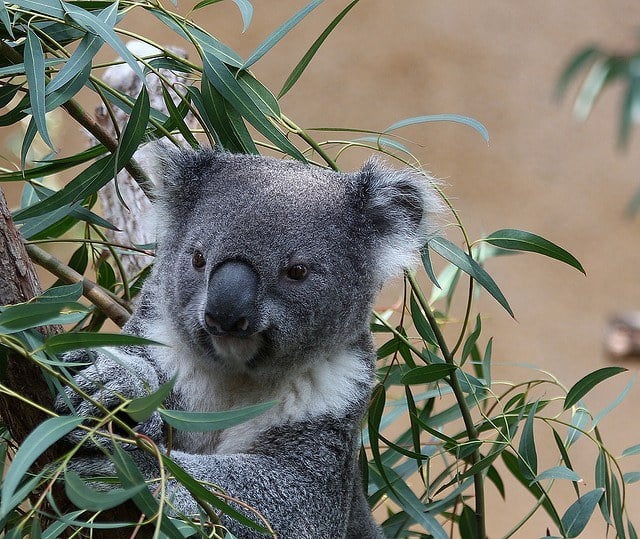 The cuddly little koalas are marsupials that live in the eucalyptus trees across the east coast of Australia. They are far fewer in numbers these days because of loss of habitat and traffic accidents.

Although it is possible to spot a koala hanging in the trees in the east coast, Magnetic Island up in Queensland has a high population for such a small area, including a special koala sanctuary, so chances of spotting them there are good.

Koalas are not found in Tasmania, Western Australia or in the Northern Territory. 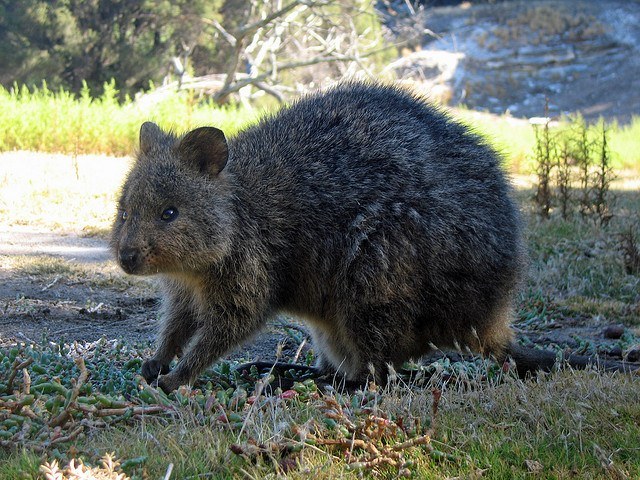 A quokka (photo by gregthebusker)

Rottnest Island sits off the coast of Perth in Western Australia, and it is home to the quokka, a small marsupial that resembles a rock wallaby with a smaller tail.

They, at some angles, resemble slightly giant rats, which is where the name “Rottnest Island” comes from.

Being around people so often, the quokkas on Rottnest do not fear humans, and they instead have a habit of running up to them in hopes of food.

When I traveled to Australia in 2009, it was my great pleasure and thrill to see three wild dingos on Fraser Island. That's the most exciting wildlife encounter I've ever had - even better than the grizzly bear at Lake Louise! I also saw many rock wallabies on Daydream Island, dolphins and manatees and one sea turtle in Moreton Bay, and about 75 species of wild birds. What a fabulous vacation!

We also went to Australia looking to find animals in their natural habitat. We found that magic on Kangaroo Island in South Australia. bit.ly/TteS4C

There are some built up areas that have plenty of kangaroos, but then others where you will never see any. Spotting koalas is also getting rarer. Finding their droppings at the base of a tree is a good indicator.

I live in Australia and have never heard of a quokka. Looks like I need to make a trip to the West!!

Don't forget the possums. You'll usually spot them at night.

Hi Brooke, Thanks for this article. I was excited to read the headline - as a wildlife tour operator that only works with wild Australian animals IN THE WILD, it is something I am passionate about. But I was a little disappointed with the content and images. While it is true that Kangaroos occur almost everywhere in Australia, they can be very hard to see in some places and at some times. They are rare in most of the Outback and near the cities, and even in prime habitat often only appear at dawn and dusk. After a bad drought, they are rare everywhere. Seeing wildlife in the wild takes luck, knowledge and experience. For more information, go to our organisation that promotes wildlife tourism in the wild: http://wildlifetourism.org.au/ If in future you ever need images of wild Australian animals IN THE WILD (not being fed or held) you are most welcome to use ours: Please don't take this as criticism, more as further information for your quest! Thankyou for writing about this important subject.