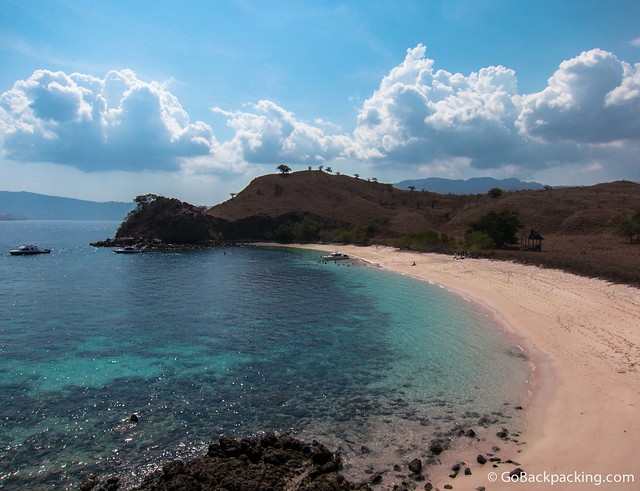 Way back in March 2008, when I first visited Indonesia, I learned Komodo Island was known not just for being home to the world's largest monitor lizards, but for the high quality of its dive sites and underwater life as well.

But unless you're a diver, you're probably not aware of the crystal-clear waters, teeming with coral and all forms of marine life in Komodo National Park.

After coming face to face with Komodo Dragons in the morning, we boarded our speed boat for a short ride to Pink Beach, on another part of the island.

Arriving at high tide, we were able to pass over the coral and jump directly off the boat and onto the sand.

When standing on the beach itself, it's hard to see the pink hue, a color given to it from the red coral that erodes and washes ashore here.

Luckily, there's a small bluff at the far end where you can get a better perspective on it.

When I asked about the fact that we were still on an island filled with dragons, I was told they don't inhabit the area where we were. 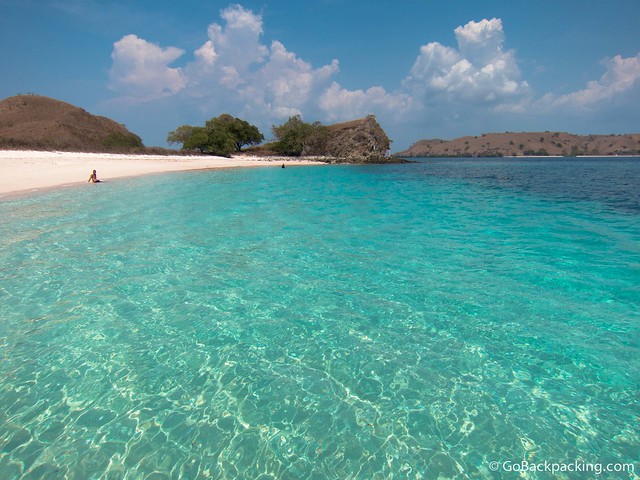 The clear, turquoise waters at Pink Beach offer ideal conditions for snorkeling. The bluff at the top center of this photo is worth the short walk for a better perspective on the pink hue of the beach.

Pink Beach may be the most popular and visited beach in Komodo National Park, but we were kindly informed it was hardly the only one featuring rose-colored sand.

We were told the beaches of Indonesia get increasingly pretty the further east you go.

And if you look at a map, you'll realize Komodo Island is far from the easternmost island in the Indonesian archipelago.

Once we were all ashore, it was time for lunch. Staff were already making use of a small gazebo to barbecue a fresh seafood feast for us all, including fish and squid.

But our collective attention was on the sparkling waters awaiting us. A few people from another tour were already on the beach when we arrived.

One girl in a red bikini was sunbathing on her own, clearly in a state of bliss. A few of the guys in her group were lounging around in the shallow water further down.

At one point, two of them decided to race, bare-chested, the length of the beach. That certainly caught all the girls' attention.

Once lunch was hastily consumed, we grabbed the snorkeling gear.

The shallow depth of water, combined with the sunshine, allowed for terrific visibility. I've never seen so much live, healthy-looking coral in my life.

There were dozens of fish species too. I even found Nemo!

If it weren't for the high likelihood of getting sunburned, I would've spent all afternoon swimming around. 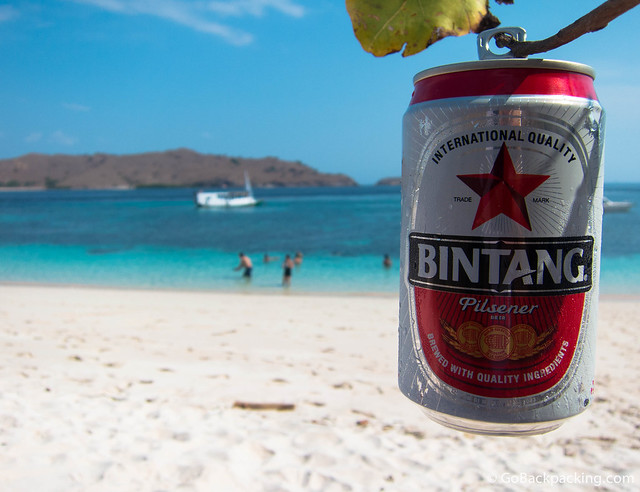 Enjoying a cold Bintang beer on the beach

Emerging from the waters, I reached into a plastic cooler and pulled out a cold Bintang beer. It was the perfect way to cap an epic day of dragons and clownfish.

During our time at Pink Beach, the first group left, and another arrived. By the time we were ready to leave, just before the sun had begun to set, the tide had gone out.

Stephen, against others' advice, and in what turned out to be one of the funniest moments of the trip, tried to swim to our boat, anchored further out.

He soon returned, shouting that we should not try to swim out. He'd discovered, the hard way, that there wasn't enough water covering the coral for him to swim.

Instead, some locals with dugout canoes helped shuttle us from the beach to the boat.

Between both the dragons and the snorkeling, Komodo National Park exceeded my expectations. With short, direct flights from Bali, it's going to quickly become a trendy side trip for visitors to Bali.

Note: My visit to Indonesia was in conjunction with a blog trip hosted by the Ministry of Tourism and Creative Economy. We took all of the trash associated with lunch with us when we left the beach.

your pictures look wonderful! Im planning to go to komodo islands this september and was wondering if its advisable to book flights and just book tour packages/boat trips when I'm there or should i do while Im in my home country ?

Hi Alesia, thank you. I don't know for sure, but I don't think you'll have any trouble booking your trip upon arrival in Indonesia, and you'll probably save some money that way too.

I just want to lie there and suck it all up!!! Absolute paradise!!

Very interesting, the komodo dragon and pinky beach in Indonesia is like a fairy tale. I must go there sometimes.

Now that is a beautiful beach. It looks so uncrowded and inviting.

Wow! What beautiful photos. I'd be a little nervous about dragons coming to that area of the island... but then again I'm afraid of everything! I want to add this to my travel wish list, thanks for sharing!