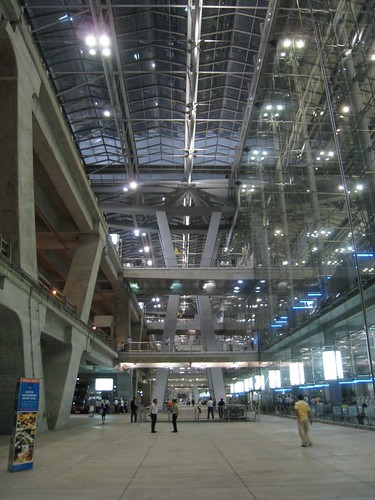 The plane set down early at the brand new Suvarnabhumi Airport, 30km east of the capital city. Walking through the cavernous, empty halls on my way to immigration, it was easy to tell the country was on top of their game with regard to meeting present and future transportation needs.

Because everyone and their mother seemed to have been to Thailand before me, I expected the infrastructure for tourists, travelers, backpackers, and desperate old men would make life infinitely easier than my past few months. The THAI flight, the new airport, and the luxurious express bus to Bangkok helped confirm that elementary hunch. 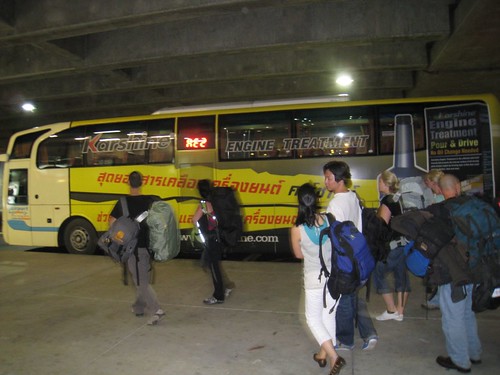 In the early evening, as traffic turned a 35-minute sprint into a 2-hour marathon bus ride (but a comfortable, air-conditioned one), light rain began to fall. I'd left the monsoon weather of India for the monsoon weather of Southeast Asia, however a few hours or days of rain at a time was a small deterrent to spending weeks at a time on the legendary, tropical islands of Thailand.

Practically the entire bus of backpackers disembarked at Th Khao San Road stop. The street I saw did not strike me as the epicenter of backpacking in SE Asia, if not the world. I ducked into a travel agency to help get my bearings. A few paces past the agency, a right turn around a corner, and I was at the western end of Khao San. The road was closed to automotive traffic save for a few taxis and tuk-tuks, which was good because a lot of people would get run over otherwise. 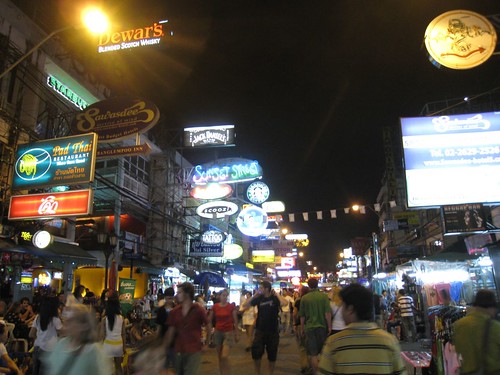 I began to walk through the gauntlet of cheap souvenir stalls, mini-bars, neon lights, and party people dining al fresco. It was early evening so the atmosphere was relaxed as Western women in short shorts shopped, deadlocked dudes listened to Bob Marley, and people wandered around feeding their faces with pad thai bought from street vendors. Everyone seemed to be having a good time.

After making a habit of arriving in new cities, countries, cultures, and environments for the past 7 months, I felt confident walking the distance of the road alone. Still, while trying to take in the sights, smells, and sounds, I didn't want to have that ” fresh off the plane”? look. I don't know why. If there was ever a place to care less about having a 20-pound backpack strapped to your back with your eyes wide open, it was Khao San, where backpacking virgins and veterans have been arriving ” fresh off the plane”? daily for decades. 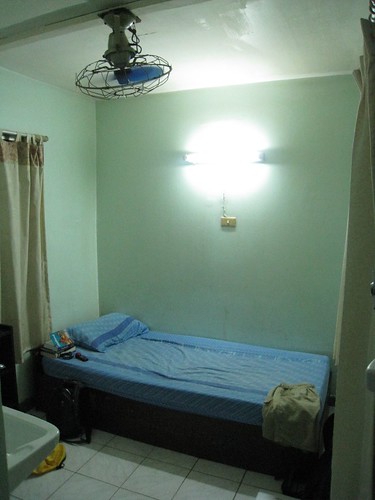 My first choice of lodgings was full, which is typical when a place is listed in The Lonely Planet, though they referred me to a bigger hotel down a nearby soi (street) which suited me fine. I had a small, well-lit, quiet, fan room with an immaculately clean toilet/shower just off backpacker central in a capital city for $6/night.

The last few weeks in India, I had been daydreaming about spending my first night in Bangkok at a giant, modern dance club with loud house music and plenty of bars. Instead, I grabbed a cheeseburger and fries at the restaurant below my hotel and reasoned that I was too tired, and it was too rainy, for such endeavors.