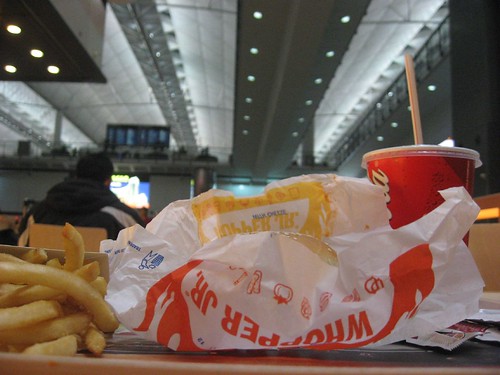 In the early evening, I arrived parched and famished in Hong Kong. After passing immigrations and customs, and collecting my bag, I bit the bullet and grabbed dinner at Burger King in the terminal. If I haven't mentioned it previously, flying with the discount Australian airline Jetstar (and it's Asian contingent) has meant I need to check my main backpack as it doesn't meet the 15lb (7kg) requirement for carry-on luggage. So far, it hasn't been a problem, and I've appreciated the ability to buy larger size liquids (suntan/bug spray, soap, etc.). 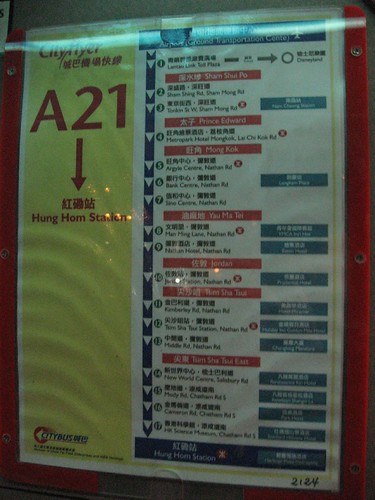 After devouring my greasy American fast food, I quickly found my way to the A21 bus which would bring me down Nathan Street to Tsim Sha Tsui in Kowloon. The day before, I had reserved a spot in a 4-bed dorm room in the Friendship Hostel in Mirador Mansion via HostelWorld.com. There were tons of reviews about the hostels in the Mirador and Chungking mansions, so I tried to pick the cheapest one with the highest rating. The general consensus was Mirador was better than Chungking.

As the bus headed toward downtown, I was soon struck by all the large apartment buildings lit up in the distance. On our left we passed a long bridge with a bright red horizontal neon stripe running along it. On our right we passed a giant port with cranes and stacks of container boxes. As we barreled down Nathan Street, I started to feel an inevitable sense of culture shock.

Neon signs extended from buildings horizontally so they were directly above the roads, which makes perfect advertising sense though feels a bit in your face. Chinese characters were everywhere, which reminded me of the fact that language barriers were about to become a bigger challenge. Every other shop seemed to be selling jewelery and the sidewalks were crowded with people being that it was a Saturday night. 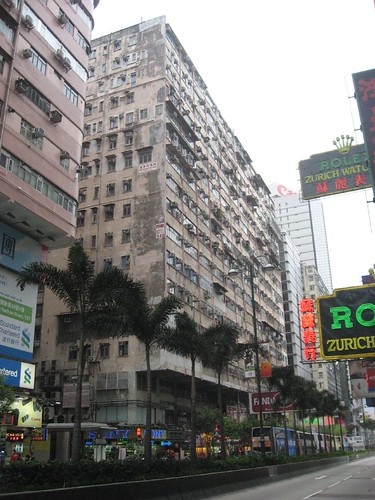 I hopped off the bus and walked the instructed 5-10 minutes south to the Mirador Mansion. The term mansion is a bit of a misnomer. Giant slum building would be a more fitting term for the view from the exterior. By 10:30pm, I was within my given arrival window, yet they stuck me in a 12-bed dorm with a ½”? thick mattress across from two toilets/showers in a room that amounted to a drafty hallway. Oh, and my feet were practically in the lap of the people using the internet next to my bed. I was so tired, I went with it and tried to get some sleep knowing my bed wasn't what I reserved.

I'm really looking forward to reading about your journey in Hong Kong. How long are you there for? I hope you'll find a better place to stay!

I'm really looking forward to reading about your journey in Hong Kong. How long are you there for? I hope you'll find a better place to stay!

you'd better move from chungking/mirador as fast as possible if you plan to stay more than 2 nights. the place is famous among backpackers but finally not the best deal, how much do you pay for your bed?