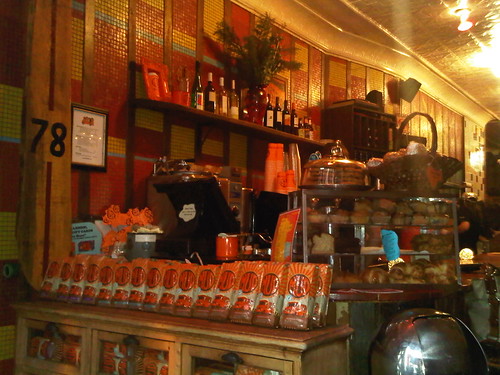 Mudspot, the cafe tied to New York City's popular orange Mudtruck, was a few blocks from my brother's apartment in the East Village.  While I was waiting near the entrance for Amy to arrive, I watched an endless stream of people duck in from the cold to grab their pre-work cup of coffee.  I forget the exact music that was playing, though I recall how it set off signals in my mind that this was my kind of cafe.

When Amy arrived, we took a table between the counter near the entrance, and the semi-outdoor garden area.  I ordered a chai tea, which arrived in a giant mug.  It was a far cry from the jello shot sized dixie cups I came to know and appreciate on the Indian trains.  Over an hour later, I still couldn't finish it! 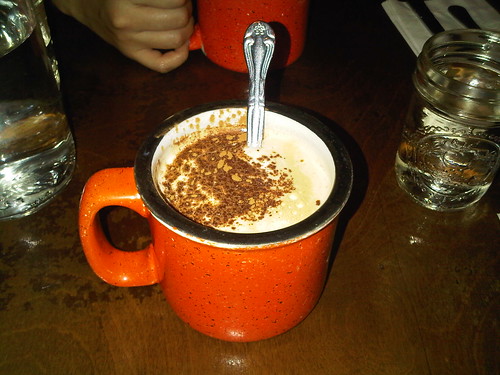 Amy had found me through Twitter, and suggested we get together to talk about travel blogging.  Luckily for her, it's my favorite subject!  She and her husband are leaving on a year long trip around the world in early 2010, and she was trying to figure out how much time to spend creating and maintaining a travel blog.  She had a lot of other priorities competing for her attention, so I did my best to share my experience.  I'll be curious to see what she decides to do.

Running a successful travel blog isn't easy.  It requires sacrificing some of your travel time to write, post photos, upload videos, and nowadays, stay connected via social media.  On the other hand, there are wonderful rewards you can experience by sharing your stories so publicly.  Inspiring others to travel, keeping them motivated to save while they're back at home working, engaging with your readers, and possibly earning a few bucks from advertising are all within reach for most people.

As in Amy's case, it's a matter of priorities, however travelers shouldn't underestimate how keeping a blog can quickly become a priority in and of itself.