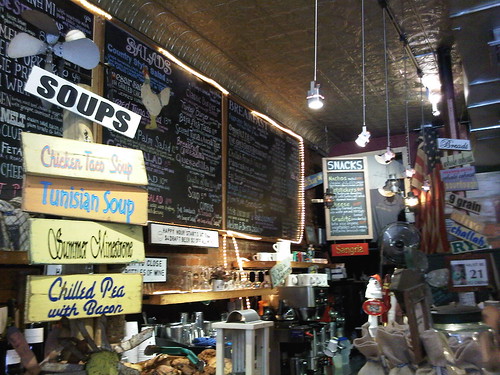 I met up with Sean and Alisha from Sosauce the afternoon following the networking barbecue in Brooklyn.

The Grey Dog's Cafe in the West Village looked vaguely familiar, and I became certain it was one of the many places my friend Kai had taken me on NYC trips past.

It was lunchtime, and the place was bustling.  We decided on our lunches while waiting in line.

I've never had a fish taco, nor the desire to try one until I saw the Seared Tuna & Avocado Tacos on the menu.

It sounded like a great combination, and if you can't tell from the photo below, they lived up to expectations.

The big, juicy pieces of tuna were cooked to a perfect medium rare so the middle was still pink.

A few dabs of sour cream and I was a happy camper. 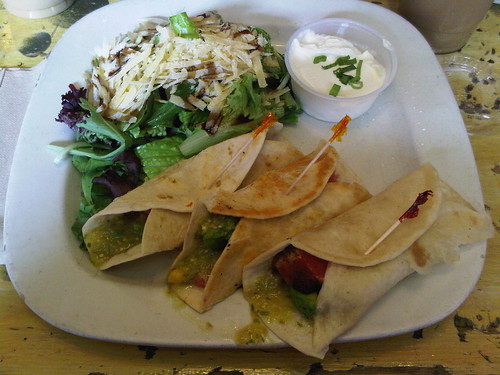 Of course, we were there for more than just food.

Sean and Alisha had a lot of questions about my trip, and I was happy to answer them all, though I also asked my own in order to learn more about Sosauce, the media-rich, online travel community they launched in 2008.

Now that I'm home for the foreseeable future, I have a few thoughts about what to do next.

First, get back into the online travel community in general, and I don't mean just in terms of updating my blog or building a profile on Sosauce or answering questions on the Bootsnall message boards.

To me, being a part of the community means all of those things and more.

And it is only getting bigger as more sites and blogs come on line each year.

I'm also going to pursue a job related to encouraging others to travel independently, whether it is online or off…though preferably on!

Lastly, and this is where a greater sense of discipline enters the picture, I will be seeking out freelance writing opportunities.

Pretty insightful post. Never thought that it was this simple after all. I had spent a good deal of my time looking for someone to explain this subject clearly and you're the only one that ever did that. Kudos to you! Keep it up

Great chatting with you - good luck in finding a job you're passionate about, we're always happy to have you with us!

Hey Dave, sounds like things are coming together. I guess it sounds a bit trite, but where you were before you left for your trip and where you are now (mind wise) are worlds apart. Life is suddenly refreshing again :)