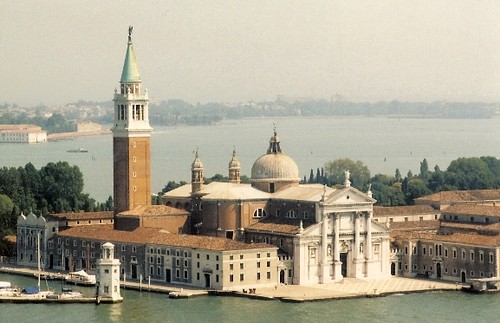 With no air conditioning, and five people in one room, last night was hot and uncomfortable. I slept well, especially after taking some cold medicine procured at a local pharmacia. Today, I learned our stay in Venice would only last two nights. For this reason, I set out to see some major attractions. But first we needed to find a cheaper hotel/hostel to stay in. After a failed attempt at this, we returned to the Hotel Leonardo and got ready to check out. As we dropped the key off, we decided to bargain, by quoting the 29,000 lire price of a room we didn't have. Since the guy knew he was ripping us off already, it didn't seem hard to bring the price down to 28,000 lire per person, for one room (down from 40,000 lire). 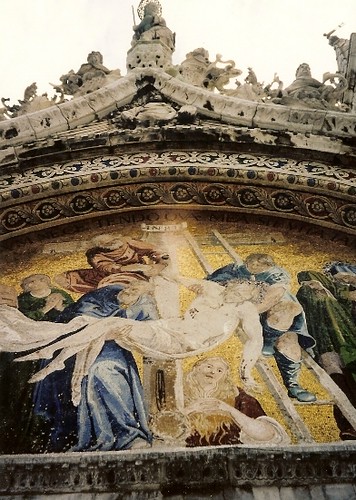 After this burden was lifted, I led the group to the Accademia which housed 15th-18th century Italian Art. The place wasn't air conditioned, like I had expected. Therefore, I continued to sweat buckets while viewing the artwork of Carpaccio, Bellini, Tintoretto, and Giorgionne, among others. Though the “Tempest” was there, it didn't seem as impressive as its legend/history. The altarpieces were amazing to see up close. The glow of the gilded paint is definitely something that can only be appreciated in person. “The Feast at the House of Levi” was there too, and it covered the entire side of a giant room. Such a giant magnitude isn't even comprehendible from a slide or book.

From the museum, we headed to San Marco. There, everyone seemed happy to feed and be attacked by the pigeons (except me and Bill who just looked on in horror). Eric and Sam decided not to pay the four dollars to go up the Campanile. I, on the other hand, don't regret spending a dime (or lire) in this beautiful city. The view from atop the bell tower was spectacular, plus there was a cool breeze. There were four giant bells up there, and I was wondering if they ring them while people are up there? From San Marco we went to Lido again. There Eric and I took a stroll down some of the more residential streets. I was trying to figure out if these large houses were apartments, and if so, how expensive they were. There were also small canals going down the east/west streets. We also stopped in an arcade. I played three games of “Fantasia.” The game attracted me because of the naked girls that appeared on the demo screen. The object was to clear a screen, using a cursor, thereby revealing a semi-naked model. Most of the other games were old, really old. For example, they had Popeye and Donkey Kong. According to Eric, the game boards/chips were probably pirated (bought on the black market), which explains why all the games are in blank or generic boxes/consoles. After the arcade, we went to dinner at a pizzeria that boasted 100 types of pizza. I ordered the mozzarella, cheese, and “roast suckling pig.” The meat was thinly sliced and delicious. And, it only cost $5. It was very enjoyable dining on the sidewalk. We even drank Venetian red wine!

After dinner, we went to the beach because Sam and Dave wanted to go swimming. There were very few people on the beach at this late point in the day. Mostly, they were tourists like us who wanted a late swim in the Adriatic Sea. After that, we took the vaporetto back to our hotel, while watching a beautiful sunset. Since the one-way trip takes an hour, we also got to see the Grand Canal and San Marco at night, all lit up. Most of the boat traffic on the canals had stopped by this time (8:30 PM?). We got to see a small boat pulling a lighted platform with an opera singer, and (4-6 piece) accompaniment. After hearing that it had reached 100 degrees Fahrenheit today, we went back to the hotel and cleaned up our sweaty bodies. 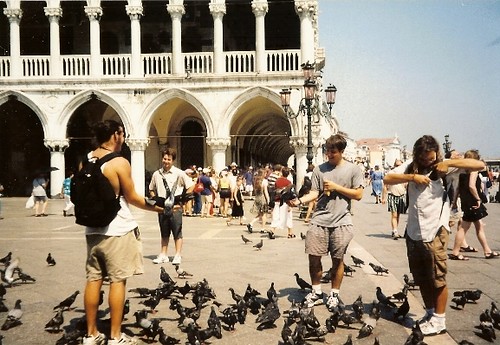 We bought some wine with the thought of drinking it near a canal. At the time, it sounded like a romantic notion, but it turned out to be a waste of time. Instead of going to the San Marcaulo boat stop (which had benches, was dark, and actually on the Grand Canal) we went down some random canal which came to an end with a wooden fence marked (no entrance). We had been sitting there for a few minutes when Bill arrived with a beer. He immediately climbed around the fence and pissed. About five seconds later 2 policemen armed with machine guns approached the fence and began to figure out who was behind it. As it turns out, there was an important statue being restored back there, hence the fence. Bill came around the fence and got a tongue-lashing from the police (who actually cocked their guns or something at one point). The rest of the time we were sitting on the small dock (in front of a palazzo), the police remained at the exit of the canal, watching us. I guess it was their beat for the night. Since I hadn't seen much public drinking (picnics) in Venice, I felt really awkward at this point. This was compounded by the small boats of people riding by us. Basically, I wasn't enjoying the situation; therefore, I wasn't even drinking the wine.

We went to a bar later, where I ordered a pint of Guinness for $4. That night Bill stayed out until 3 AM. When he got back, and was walking down the alley, our crazy Italian neighbor began yelling at him again. Bill left, then waited till the guy had gone to bed, and then climbed up the wall (of the hotel) to our second story room (about 12 feet). This was a very impressive feat to accomplish while drunk and tired.

Wow, great entry, I really enjoyed reading, I love your writing style, felt like I was there while reading :D

never underestimate the power of a drunk and the ability to do the miraculous! :)

You said it Stu. Bill never ceased to amaze me during the few weeks I traveled with him.

Another fine moment was when some random girl in a club went up and kissed him after he had just puked in the bathroom. Yuck!