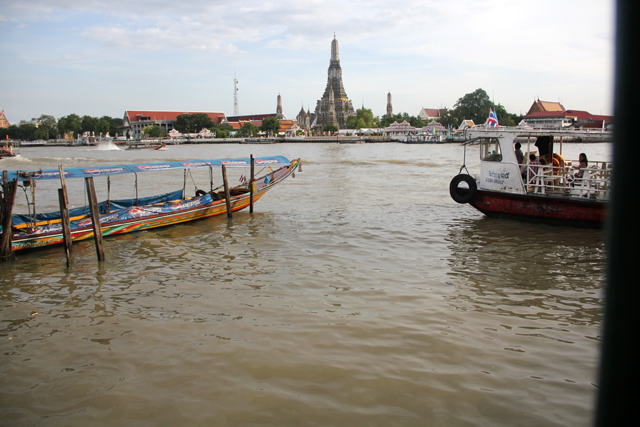 Wat Arun from across the river

[P]roudly pointing towards the sky on the banks of the Chao Phraya River is Wat Arun, one of the most iconic structures in all of Bangkok.

Also known as The Temple of Dawn or The Temple of the Rising Sun, this majestic Buddhist temple is named in recognition of the Hindu and Buddhist deity that governs the early morning.

As the sun makes its morning appearance over the waters of the river, an impressive shimmering light reflects from the temple like a shining cut diamond and ushers in another day in Bangkok.

From across the river, Wat Arun looks so small, yet its magnitude becomes so much grander when you reach the base.

Bangkok is one of the must see destinations in Southeast Asia and Wat Arun shouldn't be missed when you're there! 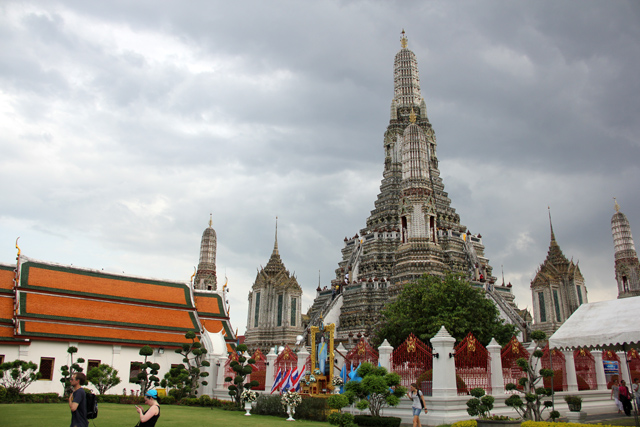 At the base of Wat Arun

Since the majority of Bangkok's central attractions and city life are located on the Eastern side of the river, it's often necessary to catch a ferry across the river to visit the temple.

Adjacent to Wat Pho, you can easily board a ferry that costs just 3 Thai Baht ($0.10) and drops you off at a dock right at the door step of Wat Arun.

The design of the temple is Khmer style with features that resemble the temples of Angkor Wat.

The main tower rises 70 – 80 meters in height (there really is some confusion and argument as to the real height of the main stupa) and there are four surrounding stupas which together make up the main part of the temple. 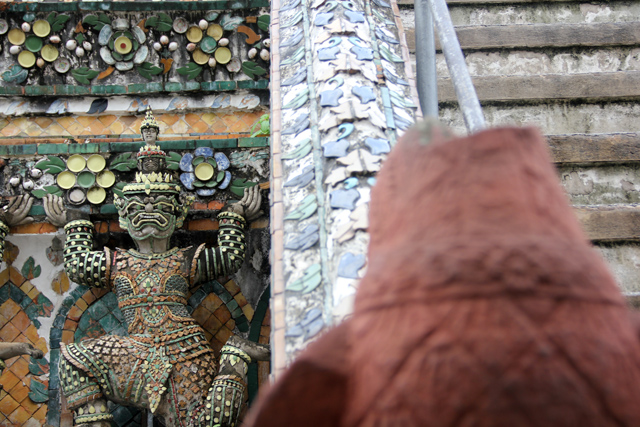 A few details of Wat Arun

As with many temples in Southeast Asia (or around the world for that matter), the construction and architecture are amazing, but taking the time to pay attention to the intricate details also makes it fascinating.

The entirety of the temple is layered with ancient Thai sculptures and patterns and decorated with a mosaic of brightly colored ceramics. The impressive details are evidence of countless hours of meticulous work and amazing craftsmanship. 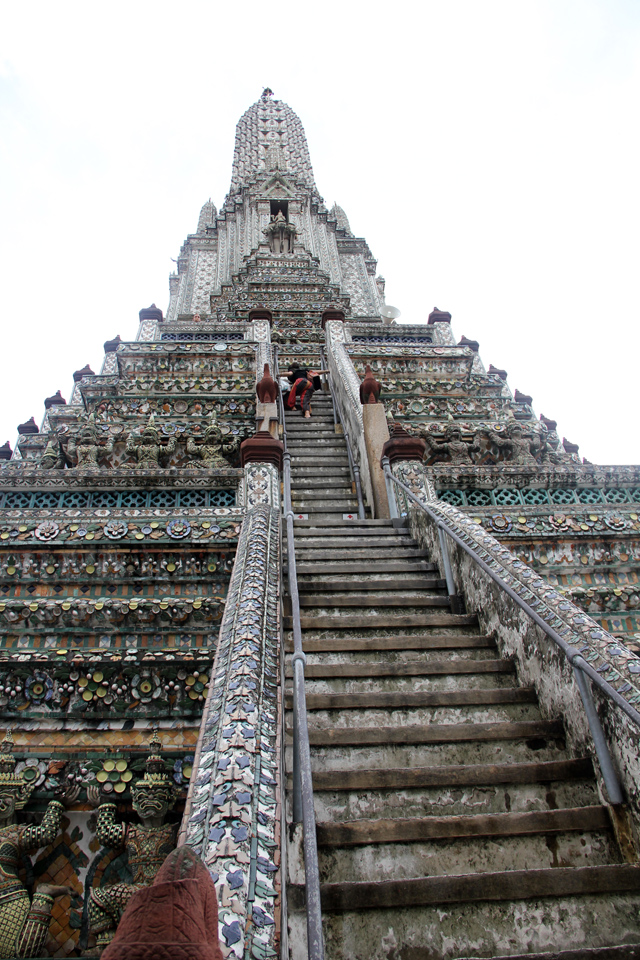 Climbing the staircase to the top level

For me the highlight of visiting Wat Arun is climbing the vertical staircase to the top level.

If you are afraid of heights (I am slightly), the ascent to the top can be a little nerve-racking, though you'll be glad you took on the challenge.

The staircase, which is more of a ladder made from steps about 5 inches wide, first leads to the middle level and then goes further up to the lookout deck. 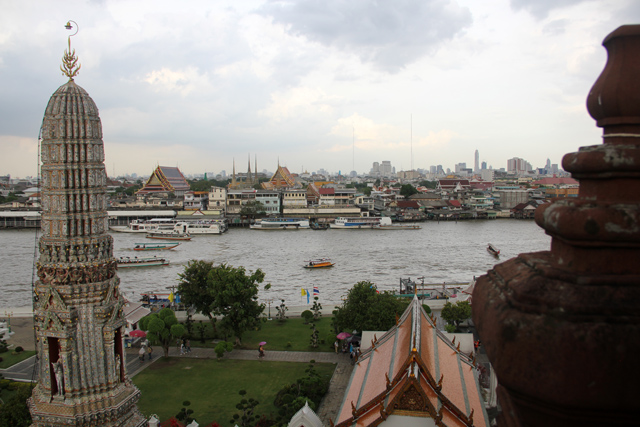 The view from the top (which is really only at about the middle of the temple's overall height) offers a spectacular glimpse of the Chao Phraya River and the surrounding landmarks of Bangkok.

The cool breeze (as in relative comparison to the muggy humidity of ground level Bangkok), the crackle of speed boats zooming along the river, and the noticeable diversity of ancient Bangkok in the backdrop of the modern city, all add to the view.

No matter how packed ones Bangkok travel itinerary is, making time for Wat Arun and climbing the ancient steps for the magnificent view of the city is a must.

I loved how you described this temple Mark. I have always seen it in passing on tuktuks but never actually took the time to check it out. Wonderful pictures as well.