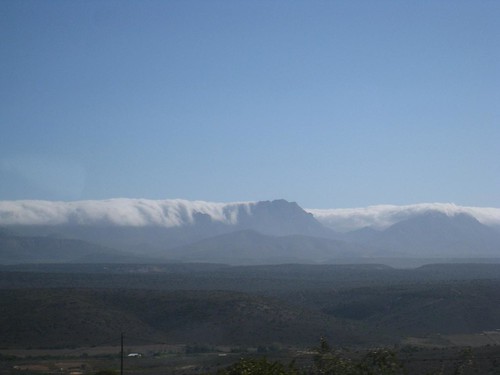 The bus and shuttle rides from Hermanus to Outdshorn, ostrich capital of the world, ended up taking an entire day. Along the way, people hopped on and off at various stops and we watched a pirated copy of ” Taken.”? I felt guilty at times, being engrossed in a movie while the countryside passed us by. As in New Zealand, the geography and weather can change quickly in South Africa. 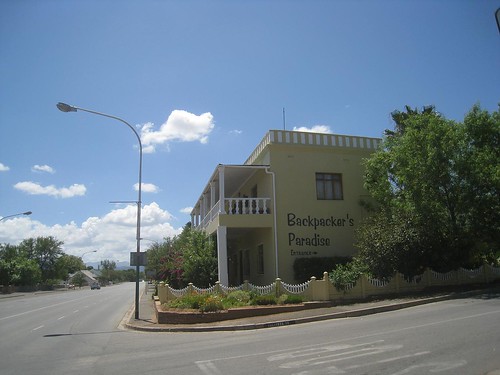 Off the Baz bus, and on the one hour hostel shuttle to Outdshorn, we passed up and over a 1,000-meter mountain pass. The weather was cloudy so we had limited views, however once we came down the other side into a valley, the sun was shining and the skies were blue. Looking back at the mountains, you could clearly see a carpet of white clouds drifting over the tops and descending down the slopes (a la Table Mountain). 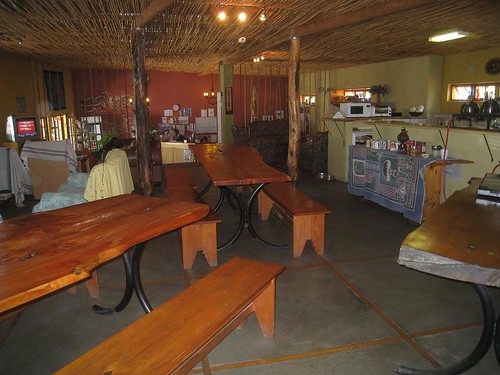 As we drove out of the green valley and passed through what I can best describe as scrub land (or dare I say African bush), purple flowers colored swaths of the otherwise drab terrain. I thought to myself, THIS is Africa!

We arrived at Backpacker's Paradise on the main street toward the western edge of town. After dropping my bag in the large, yet comfortable, 10-bed dorm room, I signed up for the nightly ostrich braai and unwound. 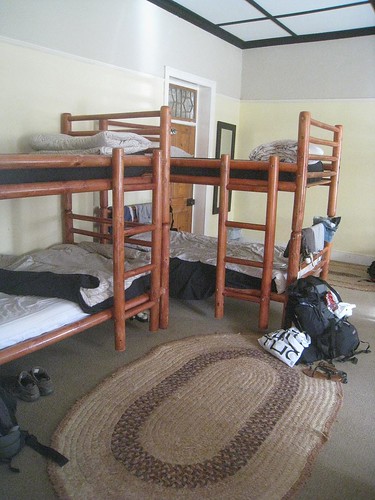 The compound was well worth the $8 per night. There were no keys for the dorm room, and you signed up for breakfast, dinner, tours, and shuttles via chalkboards. True to Lonely Planet's word, the overall quality of the hostel accommodations are the best I've experienced so far.