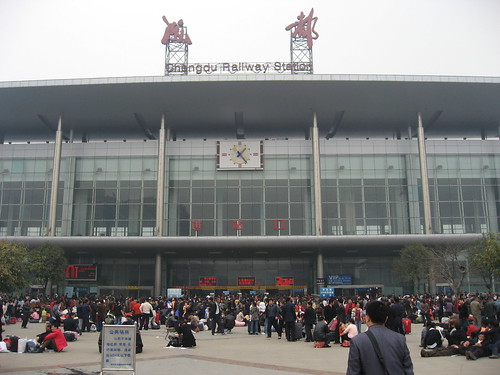 Through the travel desk at Sim's Guest House, I received a 90% refund on my airfare from Lasa to Katmandu from Air China, though I later read the airline was offering 100% refunds given China closed Tibet to foreigners as a result of the violent protests. Seeking a refund on the train ticket meant heading to the northern train station. I deemed this a job I could manage on my own, though as the taxi sped northward to the outskirts of the city, I started to wonder if I should've asked Charlie to join me.

At one stop, I saw a little girl take a pee just outside a restaurant as her mother watched. Later, Charlie told me about how babies have holes in their bottoms as diapers are not widely used. Sure enough, I saw such a bottom-baring baby a day later.

The square in front of the train station was massive and crowded. There was a sign with “Information” in English yet the woman only laughed toward her coworker when I tried to speak in English. I then tried to go into the terminal, through a security check of tickets, but was turned away as my train didn't depart that day. I looked around in a daze, and eventually saw an English sign posted on another building to the right, the ticketing counters. 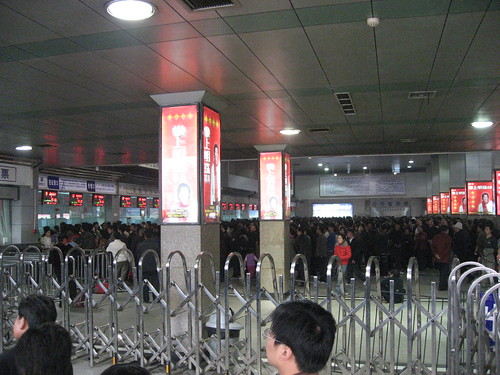 Thankfully, it was clearly indicated which counters were for refunds as the lines were massive. I walked around to the appropriate area, and though I was getting into a really, really long line. People were holding out their tickets, and others were checking destinations. It was quite a marketplace for train tickets. When one guy laughed after looking at my ticket, I realized it was probably the least desirable one in the line – most expensive soft sleeper to Lasa leaving the next day. I was content to get an 80% refund off the face value though, so I waited.

After a minute, the same guy who laughed motioned me forward to the real, much shorter line. I had been standing in a mass of people going nowhere. People continued to check my ticket, and as I was 2 people from the refund counter, a woman held out 900 yuen, roughly the amount of my refund. A gentleman speaking a little English in front of me confirmed she wanted to buy it. I was concerned about getting counterfeit money that would be useless. As the line pushed me forward, I took the money and walked off, thanking the girl, who had handed the ticket to a young Chinese guy (perhaps her friend?). They seemed happy.

I returned to Sim's Guest House, ran the money through their counter, sighed when I realized it was legitimate, and booked my direct flight from Chengdu to Katmandu via a short stopover in Lasa (again on Air China). The cost was $457 through the travel desk, which was far cheaper than any other option I found on the airline websites.

I found your site while roaming the net. Great site. I like it a lot. I feedburned you.

I have my own site. Come and check it out if you get a chance. http://www.nomadicmatt.com

I found your site while roaming the net. Great site. I like it a lot. I feedburned you.

I have my own site. Come and check it out if you get a chance. http://www.nomadicmatt.com

Wow, those crowds are quite impressive! Nice to hear it worked out though.

Wow, those crowds are quite impressive! Nice to hear it worked out though.

Getting a refund in China is nearly an impossible feat. I'm impressed. I don't enjoy ever going to the train stations here.