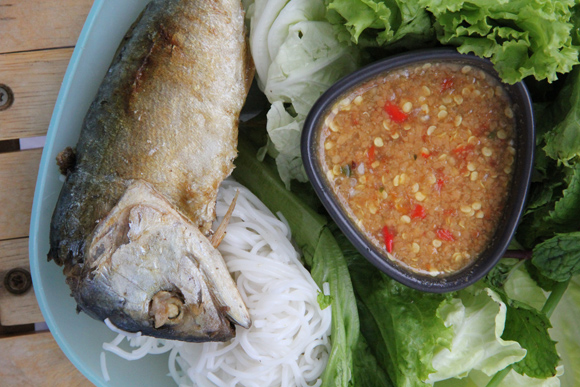 The dishes on this list are not rare in Thailand, though they are not nearly as common as some of the other well known and famous dishes.

Likewise, many of these Thai dishes are not so popular on the international scene of Thai restaurants but are well worth searching out.

So here are 11 Thai dishes that you may have never heard of, but that are some of my personal favorites. It's important to take full advantage of the never-ending supply of Thai food!

If I'm in the mood to eat something light, I almost always grab a bag of takeaway Miang Pla Too.

In the market, it looks like a big bag of herbs and lettuce with a little mackerel fish on the side.

It sort of works like tacos, you take a piece of lettuce or cabbage, add a few rice noodles, a piece of the fried fish, some herbs and then drown it in the chili sauce.

Take that entire creation and stuff it into your mouth for a sensational jolt of deliciousness! 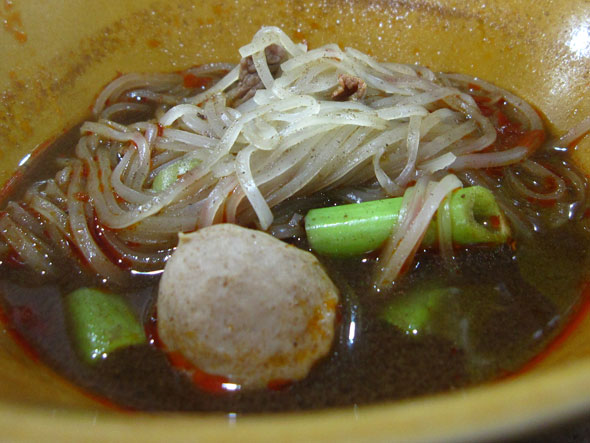 Bowls of noodles are common as Thai food meals and snacks.

Kuay Teow Reua translates to “boat noodles,” because they were originally served right out of boats floating in the canals.

Nowadays most of the boat noodle restaurants are served from stabilized restaurants.

It's the rich soup made from pig's blood that makes boat noodles so tasty! 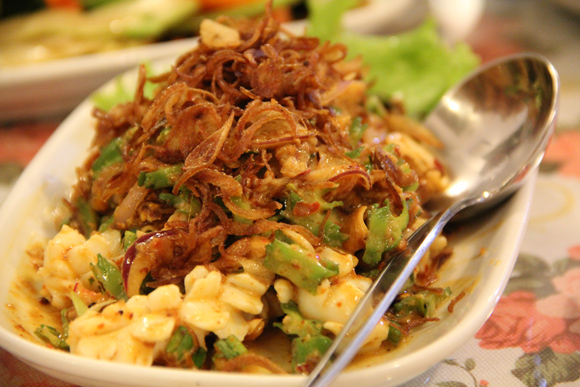 Yam Tua Plu is a fresh salad made from chopped up winged beans, a few prawns or slices of squid, peanuts and cashews, dried coconut, and all dressed in a tangy spicy sauce.

The result is a scrumptious salad combination. 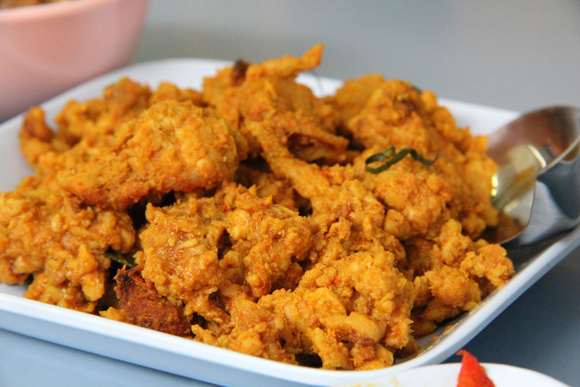 One of my all-time favorite southern Thai dishes is meat made into a dry curry known as Kua Kling.

All the meat soaks up the curry sauce and spices and makes it into something heavenly.

Kua Kling is often made spicy and served with a few chopped leaves of fragrant kaffir lime. 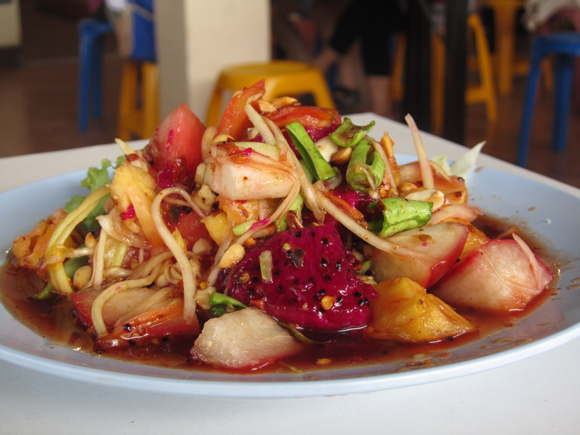 One of Thailand's most famous dishes is Som Tam or green papaya salad. Foreigners and Thais alike love the multi-variation of this crispy fresh salad.

Som Tam Ponlamai is made with the same dressing but instead of green papaya, a mix of chopped tropical fruit like guava, dragonfruit, rose apples, and pineapple are used.

It makes for a truly unique mix of sweet, salty and spicy. 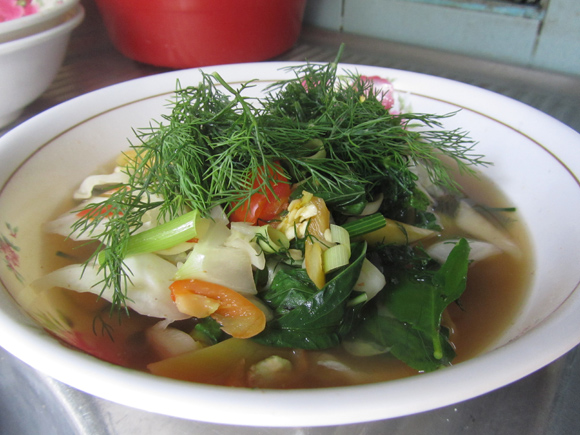 One of the most herb induced dishes I've ever tasted is Gaeng Aom.

It's a cross between a curry and a thick soup that is filled with vegetables, pork, and then loaded down with a variety of herbs.

Lemongrass, kaffir lime leaves, an assortment of parsleys, and dill leaves are the flavors that really stand out. 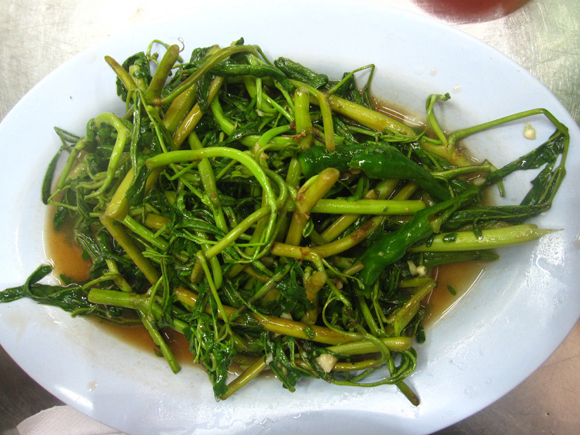 With my first bite of Pak Gachet, I knew that it was one of the best vegetables I'd ever eaten.

In English it is known as a form of water mimosa, though I had never seen it outside of SE Asia.

In Thailand the vegetable is normally stir fried up with fermented bean sauce or oyster sauce along with chilies and garlic.

It has an incredible tough chewiness to it – which I think really makes it special. 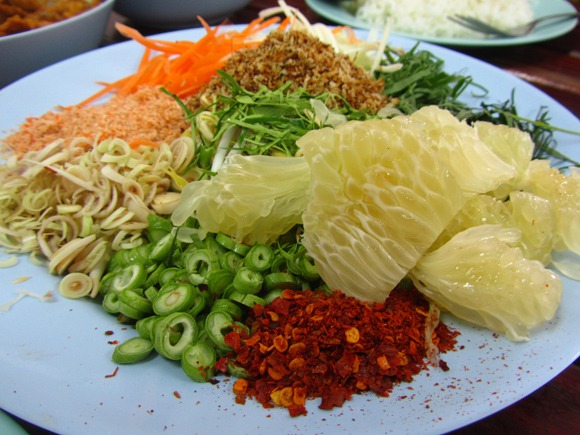 Another southern Thai dish of glory is Khao Yam, or mixed rice.

The rice is served room temperature and it tastes so earthy and fresh. 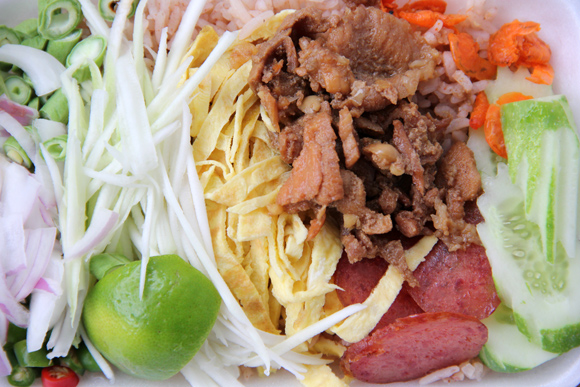 As is common with Thai food, it's the diversity of flavors that really makes it exciting! 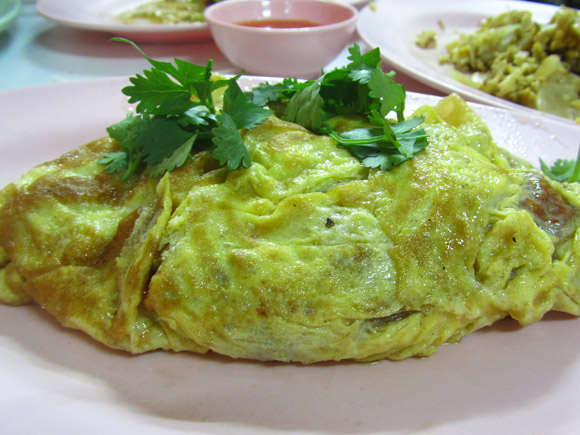 Not just an ordinary omelet, Kai Yat Sai is an egg pocket stuffed with minced pork, tiny pieces of carrots and a zesty tomato sauce. 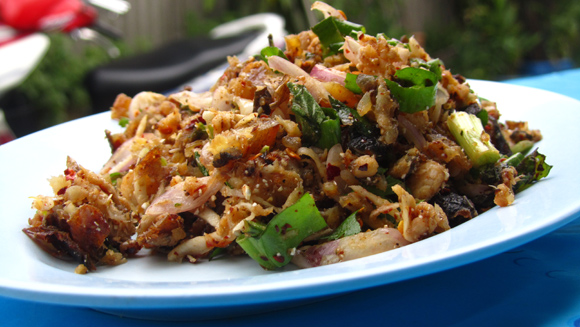 Larb Moo, which is fresh minced pork salad, is one of the most common Thai street food dishes.

However, I much prefer the same blend of herbs and spices made with roasted catfish instead of pork.

There you have it, 11 awesome Thai dishes that are not nearly as well known as Pad Thai or Green Curry!

Mmm. Thai food is one of my faves. Love how all the entrees stimulate the palate with a blend of spicy, salty, sweet, and savory.

This is a very impressive list!!  Cheers from Bangkok :)

I'm not an expert of Thai food, I've only been a couple of times to Thai restaurants and unfortunately never to Thailand. These look delicious, I think when I finally make it to Thailand I will go absolutely crazy trying out everything!

It's OK to go crazy on eating Thai food Angela - I still am crazy for Thai food!

Another Food post ! this is not fair as i am starving ! That food looks yummy, asian style cooking is my favourite, did a cookery course on it a while back although have yet to persuade my dad he might like it :-)

The realm of Asian food is also my favorite Tristan! That's great that you took a cooking course and keep trying to persuade your Dad!