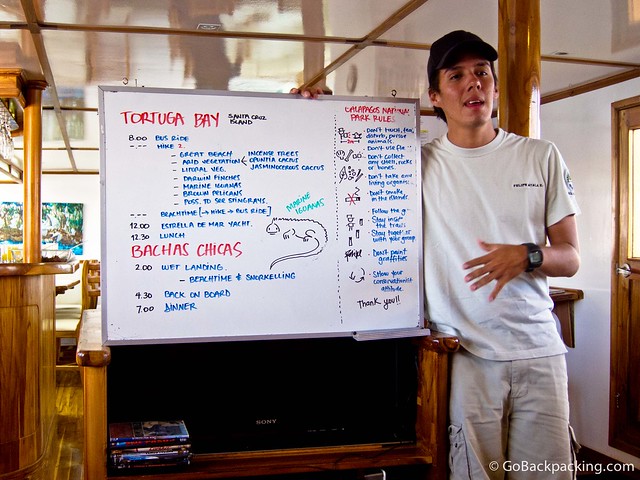 Monday morning began at 7 AM with the metallic sound of a ringing bell aboard the Eden. I'd slept well, given the yacht had been anchored in a quiet harbor.

On our modified agenda for Day 2 was a visit to Tortuga Bay on Santa Cruz Island.

Felipe assured us it offered was one of the most beautiful beaches in the Galapagos Islands, and who were we to argue.

However, in the back of my mind, I couldn't let go of the fact that we were simply killing time until our new yacht, Estrella del Mar, had been prepared. 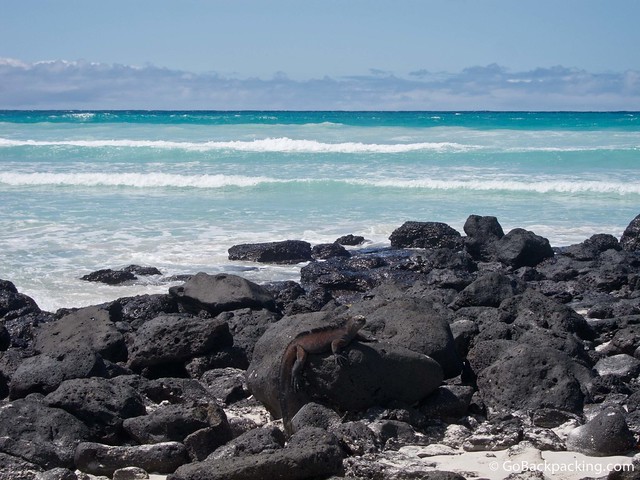 A Marine Iguana suns itself on the rocks in Tortuga Bay.

At 8 AM, we took the pangas ashore and boarded a 45-minute bus across Santa Cruz Island until we arrived in Punta Ayora, the largest city in the Galapagos.

From our brief drive through town, it wasn't much to look at. It's a short walk to the trail entrance from town, so we saw several other land-based foreigners visiting as well.

Along the way to the beach, which was a 30 to 45-minute walk along a stone trail, Felipe told us about the local fauna, including cacti that can grow to be hundreds of years old, and incense trees.

Small Lava Lizards ran all along trail in front of us.

The walk also introduced us to small but common birds we'd start to see regularly on all the islands, including brown Cactus “Darwin” Finches, yellow Galapagos Flycatchers, and the singing Galapagos Mockingbirds.

Originality didn't seem to be too important when naming species on the volcanic island chain.

A running joke was you could add “lava” or “Galapagos” in front of anything and be almost assured that was the actual name. 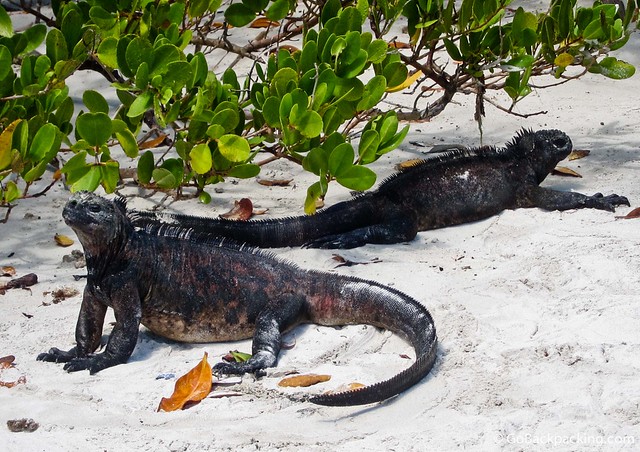 The sound of crashing waves greeted us as the trees and cactuses gave way to Tortuga Bay, and its white sand beaches.

We continued walking the length of the bay, its surf too rough for swimming or snorkeling.

The sun was strong, even in the morning. Not only were we at the beach, we were at a beach along the Equatorial line where the sun shines strongest.

I was determined to avoid any severe sunburns, and applied copious amounts of sunscreen throughout the week, in addition to wearing a hat, sunglasses, and long sleeves whenever I could bear it. 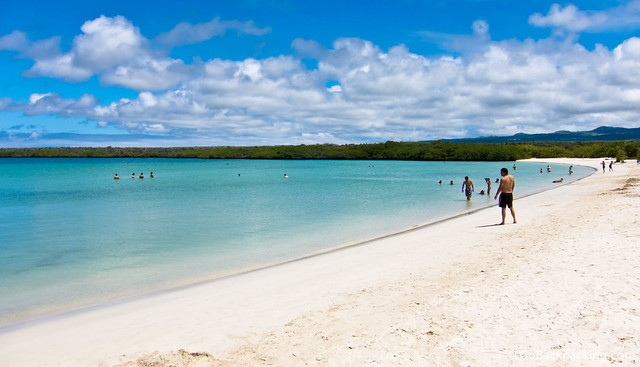 Protected by a reef, this beach in Tortuga Bay offers calm waters for snorkeling.

Felipe led us to a beach protected by a reef. It was as pretty a beach as I'd ever scene, and everyone immediately got out their snorkel gear to go for a dip in the turquoise waters.

I went in without my wetsuit to test the waters, literally. It was chilly, but the sun warmed my back so it wasn't too bad.

We snorkeled along mangrove trees, however, the visibility was all but non-existent.

I couldn't see my hand in front of my face, yet I was excited at the opportunity to see some life underwater, including White Tip Reef Sharks that were known to be in the area.

Keeping an eye on the time, so as to avoid a massive Day 2 sunburn, I turned back toward the beach about 30 meters before some of the others, who were much closer to the reef.

Turned out I gave up too early on seeing anything worthwhile, as the group by the reef saw some sharks and an octopus.

I learned an early lesson.

Back on the beach, some people sunbathed, while others took photos of the birds, which were all too happy to surround us for a chance at the crumbs of our ham sandwiches. 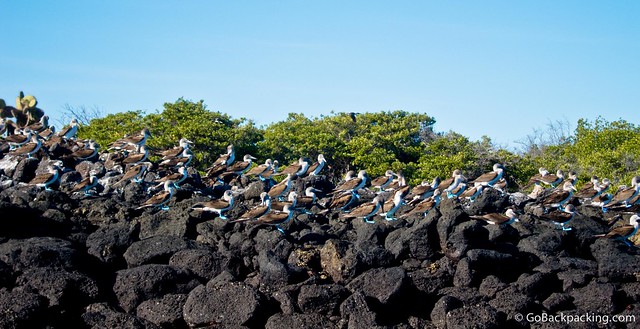 A flock of Blue Footed Boobies at sunset.

Clouds began to move in, and a light mist of rain began to fall as we collected our things and made the long walk back to the trail entrance.

The bus was waiting for us, and once we'd all boarded, Felipe informed us we'd be making a quick stop before heading back to the harbor.

That quick stop occurred on the patio of a picturesque hostel in Punto Ayora.

The Eden's Sales Manager gave us 1-page documents and asked that we sign them, thereby accepting the alternate cruise on Estrella del Mar given the Eden had been disabled by a freak mechanical accident.

The situation stoked the annoyances from the night before, however, the only alternative was to get a refund, and basically be left in Punta Ayora to try and book another cruise.

Given all but myself, Sebastien, and Maya were on vacation, that wasn't a feasible option.

We all signed the document. If I had wanted to book a cruise from Punta Ayora, I would've done that previously.

Plus, it's amazing how fast you begin to bond with people, and I was enjoying the company of my cruise mates.

The idea of having to start over with a whole new crew of people didn't appeal to me. 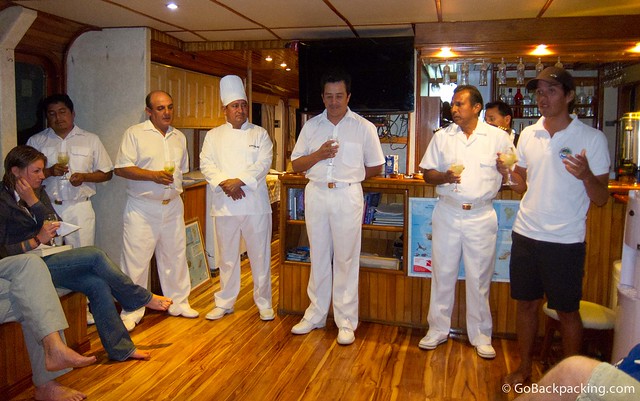 Paperwork signed, we took the 45-minute bus back to the harbor, where we boarded the pangas to Estrella del Mar.

We were shown to our assigned rooms, and as expected, Sebastien and I were placed in a cabin below deck.

I knew the room-with-a-view placement of two solo male travelers on the Eden had been too good to be true.

Our new cabin was the same size, but the beds were wider, and the bathroom a little smaller.

Unlike the Eden, we had our own AC unit which we could fully control.

The interior design of the Estrella del Mar was more of a classic ship design. Less modern, and lots of wood trim.

A third level sundeck was a bonus for us all, and one of the only things I missed from the Eden was the wood decks.

Estrella del Mar had plastic mats which were fine, but not quite as elegant.

After a late lunch, we took the pangas to a nearby beach where we passed a flock of Blue Footed Boobies.

We had the beach to ourselves and stayed until the sun began to set.

Then it was back in the pangas, and back to our new yacht where we were introduced to the crew with (another) welcome cocktail and fed pasta for dinner (again).

Then, the Captain started up the engines, and we began the 9-hour, overnight cruise to Espanola Island.

Almost everyone on board popped a sea-sickness tablet in preparation for a bumpy night.

After all the anxiety created by our false start on Day 1, it finally felt as though our Galapagos cruise was underway.

Your stories make me want pack light and set for some adventure, sand and gorgeous sea.

Wow, that's an incredible beach.  What a way to spend some time. A very cool experience.