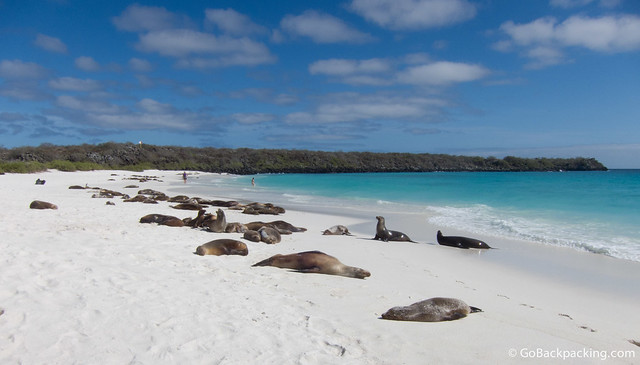 Aside from reading Darwin's Origin of Species 15 to 20 years ago, I had little knowledge of the Galapagos Islands, so it was a wonderful surprise to learn that we'd have the chance to go swimming with sea lions in Gardner Bay on Day 3.

Located on Espanola Island, in the Southeast corner of the Galapagos marine park, spending time in Gardner Bay erased any lingering thoughts of the Eden Yacht debacle.

We arrived in the tranquil waters almost exactly 9 hours after we'd set off from Santa Cruz Island the night before.

This was my first night sleeping aboard a small yacht motoring across the open sea, and it was quite an experience.

I lay awake in my bunk for about 3 hours after dinner, watching the room sway back and forth.

I wasn't getting nauseous; I think it was a combination of excitement, nerves, and the loud noise of the motors that kept me awake that long.

By midnight, the motion sickness pill knocked me out and I slept well until morning. 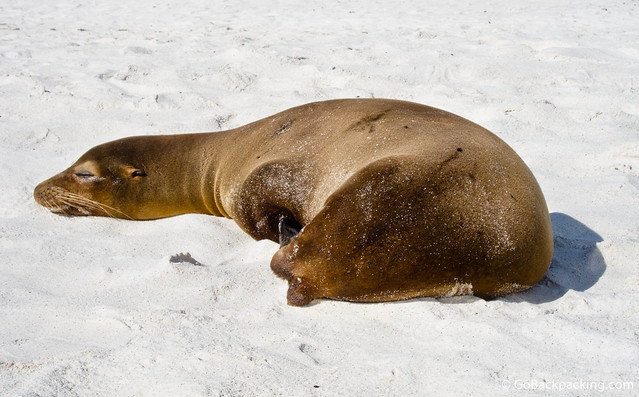 We had breakfast at 7 AM, and then boarded the pangas for the ride to shore. We were the first visitors to the beach that morning, beating the other boats by 10 – 15 minutes.

The park tightly monitors cruise itineraries to ensure a dozen boats don't arrive in the same locations at the same time.

As a result, even though there were another 50 – 60 people on the beach besides our group, it still felt fairly empty. 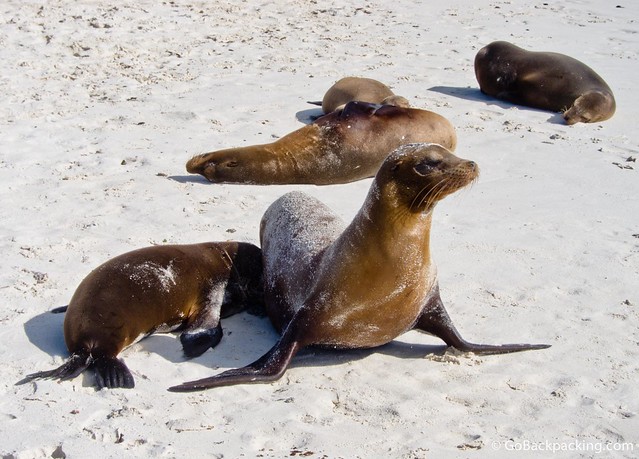 A sea lion checking out the tourists.

There were sea lions everywhere. Sunning themselves on the beach, rolling around in the surf, and swimming offshore.

They talked to each other by making a gutteral noise that sounded like they were vomiting, but I found everything about them endearing.

We spent some time walking the length of the beach, observing their behavior and taking photos.

The more serious photographers, like the other David on our cruise, carried tripods and camera bags with telephoto lenses. 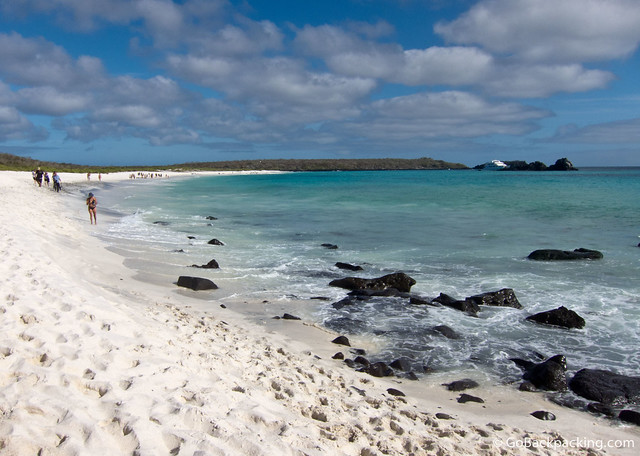 And then most of us donned our wetsuits, fins and snorkels, and hit the water for a trip around a rocky outcropping that was about 50 – 75 meters off the beach.

Felipe had enticed us with the chance to see Galapagos Sharks, in addition to the sea lions.

I've done some snorkeling before, but not often enough to consider myself skillful at it.

Once I'm in the water, it usually takes me awhile to become comfortable with the whole breathing through a tube while looking for sharks concept. 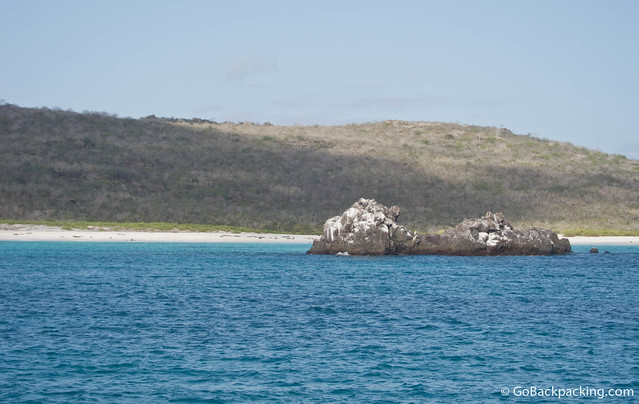 Our 1st snorkel was around the rocky outrcopping off the beach.

Thankfully, the water was calm enough that morning, and the currents slow enough, that I made it around the rock without too much effort.

We approached it from the left hand side (when looking at photo above), and went counterclockwise. Along that left side, someone was pointing into the water at a certain spot.

I swam over, looked below, and saw a stationary Galapagos Shark hanging out under a rock.

We learned sharks like to rest during the day, and surprisingly, they are able to rest in one spot (contrary to popular belief that they always have to be swimming to stay alive). 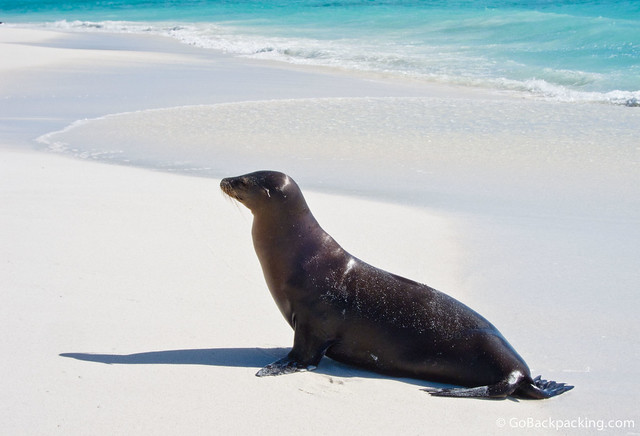 Sea lions have ears, seals do not.

Heart beating faster, I continued around the back side of the rocks, and out of nowhere, a sea lion swims up from below, directly in front of me, and does a rotation a few inches away.

The sun was shining bright that morning, and beneath the surface, it illuminated his/her golden brown chest.

Graceful is the best word to describe how these marine mammals move underwater.

I immediately associated the experience of swimming with sea lions with watching mountain gorillas in Rwanda.

Both are awe-inspiring wildlife encounters.

The best in my life. 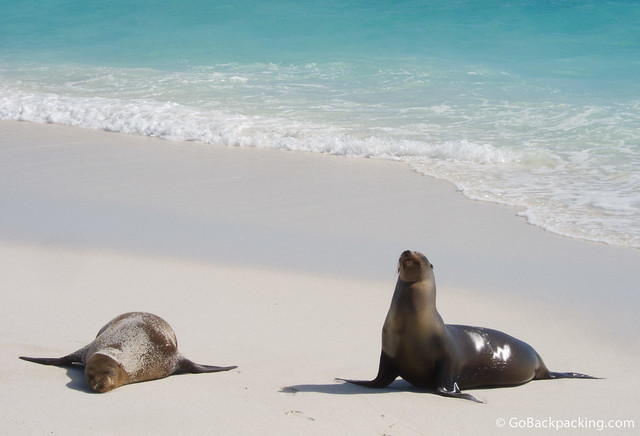 We returned to the beach, and boarded the pangas for another snorkel.

This time, we headed to a small island in the opposite direction of Gardner Bay, and would snorkel off of the pangas (as there was no beach).

Sticking close to the rocks, we traced the outline of the island, and within 10 minutes, were befriended by several sea lions. At one point, I counted four swimming around below the surface.

We all were excited to be in their company, watching them play beneath the surface, and do the occasional swim-by out of curiosity. 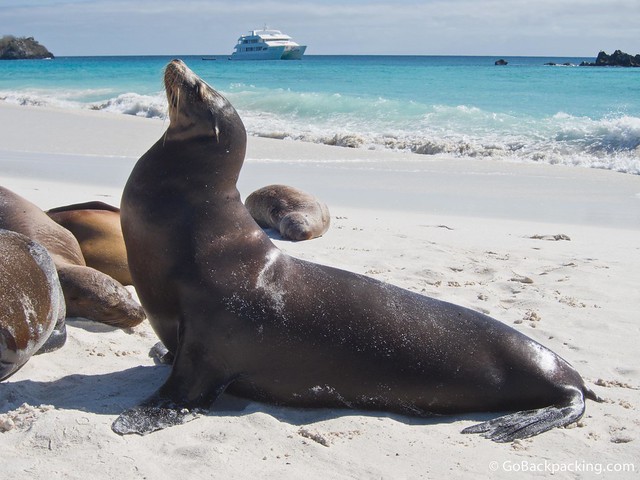 If I'd moved a little to the left, I could've gotten this sea lion balancing a catamaran on his nose.

I could've snorkeled there a lot longer than the 30 or so minutes we stayed. I couldn't get enough.

Spoiler Alert: swimming with sea lions in Gardner Bay would be the underwater wildlife highlight of my 8-day Galapagos cruise.

And by the time we climbed back aboard the Estrella del Mar for hot chocolate, and lunch, our day on Espanola Island was only half over.

In the afternoon, we were headed to Punta Suarez, where I'd rediscover my appreciation for birds, big and small. 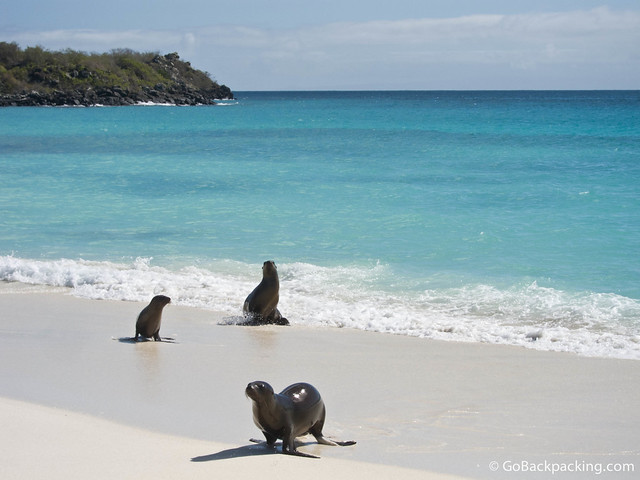 Sea lions playing in the surf.