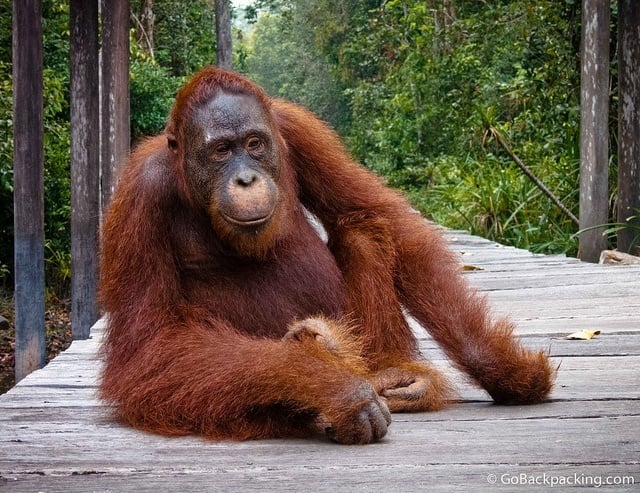 [O]ne of the highlights of my travels last year was the chance to revisit Indonesia, and go beyond the tourism hotspot of Bali.

Four years had passed since my first visit, and I was viewing the country through a more curious eye, and a higher quality camera.

My first stop was the island of Borneo, much of which belongs to Indonesia. Borneo is one of the few places in the world where it's possible to view wild orangutans in their natural habitat.

As a result, there's now a steady flow of tourists making their way through the rivers and forests on wooden boats, called klotoks, to view these amazing creatures.

After viewing an organized feeding by park rangers our first afternoon, and spending the night sleeping aboard the klotok, I awoke early the next morning to a sweet surprise.

A young female orangutan was watching our boats from a tree near the dock. Her name was Sweet Hope, and she cautiously began to make her way toward us.

For thirty minutes in the gentle light of dawn, I revelled in Sweet Hope's company, as she climbed around the dock, drinking water from the river below, and posing for my camera.

It was as if she could sense a performance was required, and was up to the task. I took photos of a dozen or more orangutans during my time in Borneo, but Sweet Hope's were far and away my favorites.

The 2013 Garuda Indonesia World Photo Contest is now underway, and I'd like to invite you to participate.

The theme of this year's photography contest is “My Enchanting Town” and contestants are asked to submit photos representing their home town or country from three different perspectives, including: nature, culture, and people.

The winner of Best Overall photo, as judged by a panel of professional photographers, will receive a cash prize of approximately $4,000 in addition to roundtrip airfare on Garuda Indonesia airline.

Additional categories and prizes are also available. The contest runs through July 28, 2013, and is open to participants from around the world, regardless of age.

For more information, visit the official contest page. Submissions are already being received and posted to the Gallery, so don't delay!

If you've got questions or comments about the 2013 Garuda Indonesia World Photo Contest, share them below and I'd be happy to answer them.

This post was written by Dave and brought to you by Garuda Indonesia.

Hello, I am from Indonesia, I feel proud of our country you call the post :) thanks Reviews

indonesia is beautiful contry.. although i never go to Kalimantan / Borneo, i still hope i can go there

I'm an indonesian, but never went to Borneo before though.. So happy knowing those orang-utans are nice to people