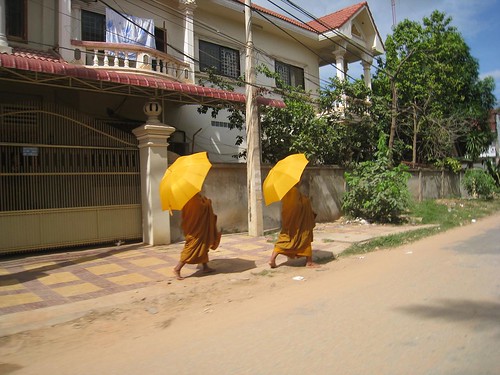 Another Day In Camobida is a tourist-aimed booklet which highlights organizations whose support can directly benefit the local community. I decided to spend a morning visiting such places around Siem Reap. Below is the related entry from my journal.

Been a good day so far. Met and ate breakfast with a New Zealand girl at the Butterfly Garden. (The restaurant pays local kids to collect butterflies for its garden. I arrived too early to see the kids set the day's batch free.)

Was the first tourist to visit the newly opened visitor center at Angkor Childrens Hospital. They were still putting the finishing touches on it. The Manager was an Asian-American woman. The center's architect is from New York City, and just designed a new building in Bryant Park. (The hospital offers free care to children from all over Cambodia. It is staffed by Cambodian doctors and nurses.)

I donated $30 at Handicap International. The facility looked really basic, but it's free to Cambodians, transport, dorms, food, physical rehab, prosthesis, because those affected are often poor rural farmers. (The facility helps Cambodians affected predominantly by landmine and UXO (unexploded ordinance) explosions. Among the recent homemade prosthesis made by the injured before they could visit the center were a few examples which literally incorporated the metal shells from bombs. The examples shown in the photo were no more than a few years old.)

The Angkor Museum was opened in 2007. It was huge, empty of tourists, but well designed and worth a visit I thought. There was a good energy in the room/exhibit with 1,000 Buddha statues. You could feel it, as long as you were open to it.

And lunch of ostrich near Pub Street before an internet/writing session. I'm 99% sure my ASUS AC adapter broke again, and after paying $40 for a new one, and having it less than one week. I'm pissed off about that. I'm going to have to haul the computer around through Cambodia, Laos, and northern Thailand for another six weeks before going back to Bangkok and visiting the service center for a replacement. If that one breaks, I'm going to forget about it for the rest of the trip. 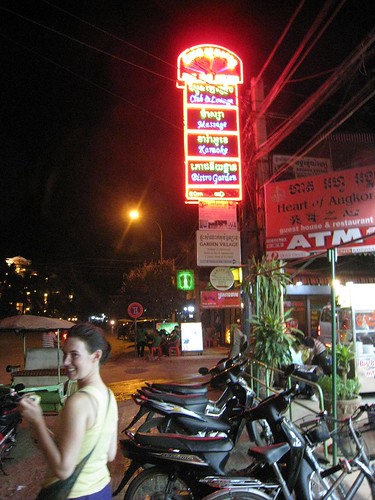 As Alice had left in the morning, it was down to Ross, Sandy and myself for dinner. Afterwards, Sandy and I headed to the night market as I searched for a scorpion to eat (no luck). Then, we went to the guest house of an Austrian she had met a few nights prior, where we encountered a favorite scene of mine. A small table in an quiet restaurant, a few well-seasoned backpackers from different countries, and a free-flowing exchange of travel tales. We talked for about three hours before calling it a night. 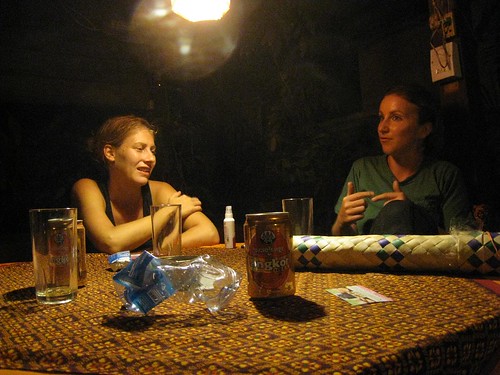