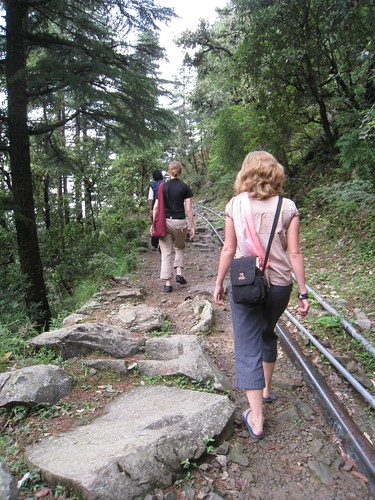 My first priority upon settling in McLeod Ganj was to reconnect with my friend from , Steve. He had arrived a few days before me, and attended the first of two teachings being given by His Holiness the Dalai Lama at a local Tibetan school, Attendance for everyone but the kids meant sitting outside the auditorium and either watching a video feed under a tent or simply listening to the English-translation broadcast on a designated FM station.

As Steve wasn't feeling well enough to attend the second teaching, I met up with two of his friends, sisters Anastasia and Olga () at the bus stand around 8am. I noticed people lining up and realized it was because we were standing along the road to the school. A minute later, the caravan drove through with His Holiness in the second SUV. He was on the opposite side from me though. Anastasia and Olga lead me on the short walk through a pine forest to the schoolyard. We sat up on a grass and stone bleacher/retaining wall, and tuned into the broadcast.

I spent the following few hours people-watching, observing the clouds roll past the surrounding forest, and gazing out at the distant mountains. I can't claim to have taken anything tangible away from the teaching, but I felt lucky just to be in the right place at the right time.

As the question and answer period wrapped up around 11:30am, a motley crew of tourists, local Tibetans, and monks gathered outside the auditorium's exit to catch a glimpse of HH the Dalai Lama. Our patience was rewarded when he eventually emerged to the tourist paparazzi. I had wanted to shoot on ” continuous”? mode, however it didn't seem to be working with zoom, so I was fumbling around with my camera instead of paying full attention!

I finally got my act together to catch his warm smile and wave as the SUV drove by. It was as if he had rainbows and sunbeams sprouting from his eyes.