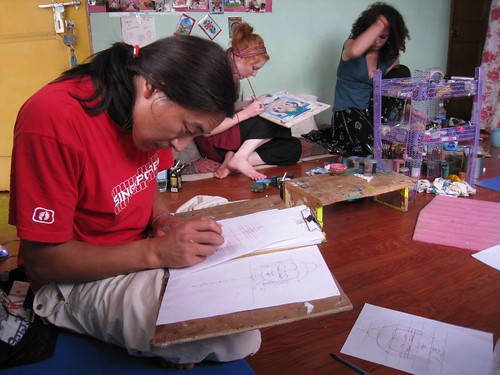 There is so much going on in McLeod Ganj, it can make your head spin. I decided to start off nice and easy by joining Anastasia and Olga for their thangka painting class. The first few sessions are dedicated to drawing Buddha's face and body according to standard measurements. The class is held in the Tibetan teacher's, Lobsang's, living room. He charges $5 per 3-hour session, of which there are two per day, and all materials are included. I lasted two sessions before bailing on my career as a thangka artist. 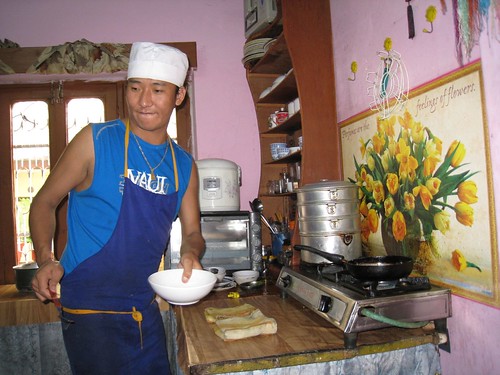 Cooking classes, on the other hand, were more my style. For $12.50, I would get to attend three classes in Lhamo's kitchen. The first class was dedicated to breads, of which we learned to make three varieties. Lhamo did all the prep work, so there was little opportunity for us to participate beyond kneading dough. Still, the breads were quite tasty! 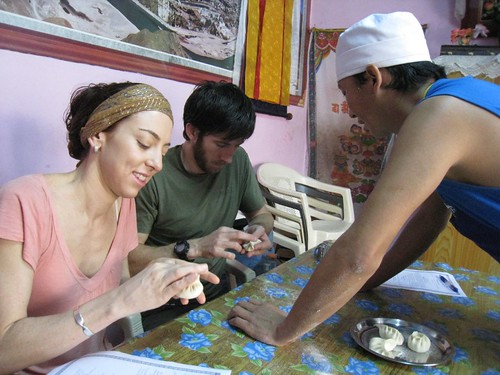 The second session was the main event, momos. Momos are the Tibetan version of ravioli. We made the dough from scratch, and learned three different styles for forming the momos (which there is little chance I'll remember in six months). One set was filled with spinach and cheese, another veggie (mostly cabbage), and the sweet ones with a sesame seed and sugar mix. Lhamo steamed them, and then allowed us to dig in, offering soy and tomato sauces as accompaniments. The best part about making your own momos is you can stuff them with anything you want. So far, the tofu and cheese momos I had at the Green Hotel's restaurant are my favorite. 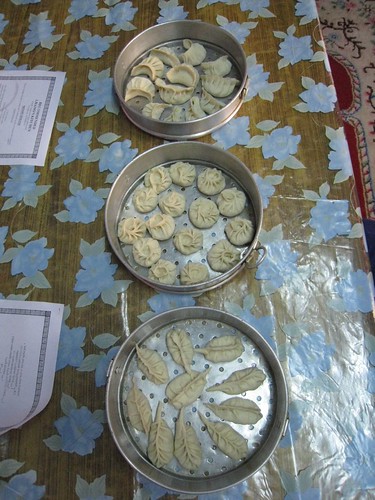 I've yet to attend the third class…soups. I can't imagine it'd beat momo-making so I'm in no rush.

I have four Tibetan Thangkas for sale. I acquired them when I was serving in Nepal as a Peace Corps Volunteer in 1970. Modern ones. Modern style. Bought from the Chini (Sugar) Llama at big stupa in Kathmandu.

Where is a good place to sell them near Washington, D.C.?

I can forward photos.

So, when you get back to the states, are you going on a cooking tour? Do we have the next Iron Chef USA in our midst? Or can I at least bribe you to come make momos for me?

I would've loved those cooking classes. Those momos look interesting. Do you get a cert for it too? Can we come over for lunch one day when you're done traveling :razz: ?

A certificate? Not quite. Several of the other people in the classes mentioned the idea of inviting people over for a momo-making dinner party because it really does involve a few hours of time to prep the ingredients, make the dough, etc.

Wow dave your getting a lot of traveling in in a small amount of time is it wearing you down.. Some good pictures by the way.

Nope, not wearing me down yet. When I feel like I need a new environment, I just move on!