This is a guest post by Joel Putnam. If you want to guest post on Go Backpacking, please read more here. 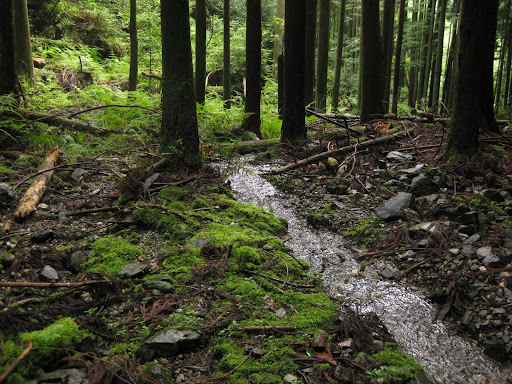 Picture this Japanese forest going by your train window

The bullet train jolted me awake at about 250 km/hr. After an all-nighter climbing Mt Fuji, I'm not sure anything else would have done the trick. But the sudden shake sideways, caused by another 250 km/hr train passing us in the opposite direction, was enough.

First thing I remembered upon waking was being annoyed with myself. My JR rail pass expired at midnight. I'd wanted to get to Shimonoseki in time for the ferry to Busan, Korea. But I'd missed a subway by five minutes, causing me to miss the first train, causing me to miss that day's ferry.  A five minute delay snowballed into a full day's delay. I wasn't pleased.

I groaned, rubbed my eyes, and looked out the window. It was quite a view, all bamboo forests and hills. They gave way to a village made entirely of rice paddies and traditional Japanese houses, like something out of a childrens' picture book.

From there we went into a tunnel, and back into the hills. Then came a second traditional Japanese farming village. Then the third, after another tunnel. I got out my camera as we went into the second tunnel and got it ready to take shots of what I expected to be the fourth village on the other side of the latest tunnel. That's when a tone sounded and an announcement came through the speakers for the next stop: “Tsugi ekewa Hiroshima. Hiroshima desu…”

I lowered my camera. There would be no ancient farming village on the other side of this tunnel. Anything made before 1945 would be gone.

We pulled into the Hiroshima station and I looked outside at the rain. Do I get off? I might still make it onto tonight's ship, if I happened to get a fast local train connection to town, and then begged. Even if I didn't, I wasn't sure I wanted to see this place in the rain. What would there be left to see?

I was pretty much convinced not to go, until I thought of something my father told me a long time ago: that in life, he'd always regretted the things he hadn't done far more than the things he'd done. I picked up my new bag, squeezed past the people boarding, and stepped out of the train. 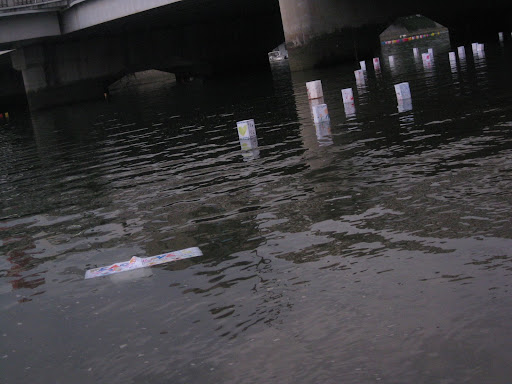 Paper lanterns made by children and floated in the river to commemorate the victims of the bomb. The collapsed one was one of the sadder things I've seen in some time.

It was hot.  The bad kind too.  Not scorching, but just muggy enough to make you feel sticky. I walked downstairs into the station and picked up a free tourist map, wandering vaguely towards something described as the “Peace Park.”

I read about an event or two planned on the back, where families of the victims of the atomic bomb would gather at 6:00pm to launch paper lanterns with messages for peace down the river in honor of the 64th anniversary of the bomb.

I looked at my cell phone to check the time.

I've seen demonstrations for peace before, but usually they're either political or filled with the kind of guy who, when I asked for tips on traveling through Laos, turned his blond, dreadlocked head to me and said “Love. Just… open yourself to Love… all around you.” 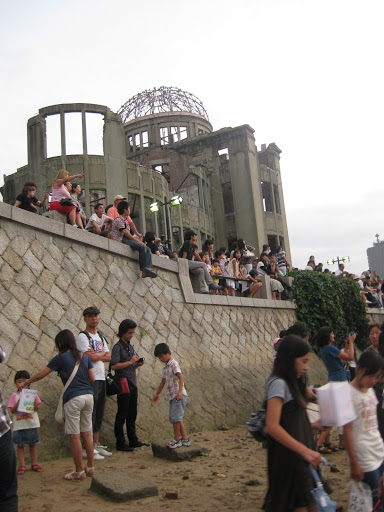 The only building in Hiroshima to survive the atomic bomb.

This was different. I saw families walking down the street with their kids, who were drawing on pieces of paper, getting ready to send them out across the water. Pieces with Japanese flags, American flags, and simple words.

They wrote their messages, attached them to floating bottoms with candles, and sent them down the river under the shadow of the “atomic” dome – the skeletal beams of the only structure to survive the nuclear explosion.

I wondered if that was really what it took to bring people together with an answer, a quiet demonstration that they saw death and destruction a long time ago, they know an alternative, and they want to honor it.

I saw a group of people around my age holding signs that said “Free Hugs.” I walked up to one of them and asked a man why the signs were only in English, and not in Japanese. He told me in broken English that it was an international symbol that the Japanese people knew too.

My grandfather and great-uncle both served in the US military during WWII. We've always been proud of that. Still, my great-uncle has a few things to say about the Japanese that I don't care to repeat in public. Many of these guys probably had grandparents in the Japanese military. Who knows what some of them say about people like me and my family.

All I know is their grandchildren were there to honor peace, and they wanted to give hugs, and their signs were written in my language.

I caught the ferry to Korea the next day. I don't mind the delay anymore.
—-

Joel Putnam dreamed of seeing the world and having big adventures when he was little. Now he's out doing it. If you've got the time and the curiosity, read some of his stories and tips at jtrek.blogspot.com.

Would love to the paper lanterns.

I had grandparents and mentors who were in the war also. I've heard them tell stories and say somethings that I won't repeat. For me however, Japan and Asia as a whole is quickly making it's way to the top of my list. The next place I would like to stop in and see is Japan.

I had grandparents and mentors who were in the war also. I've heard them tell stories and say somethings that I won't repeat. For me however, Japan and Asia as a whole is quickly making it's way to the top of my list. The next place I would like to stop in and see is Japan.

I'd definitely recommend a visit. I'd also echo Rhys' feeling that there was no hostility, no blame laid. Just a simple act of remembrance. You don't need to go to Hiroshima or Nagasaki to see it either-- I know there are monuments in Tokyo, and I bet there are others elsewhere.

Hey Rhys, thanks for the thoughtful comment on Joel's piece about visiting Hiroshima.

...and sharing your own experience in Nagasaki. I'm becoming increasingly curious about visiting Japan as I hear more people's stories from their time there.