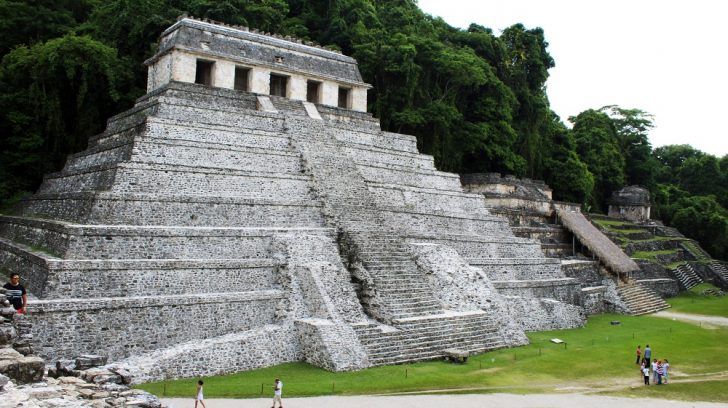 Among those with the means and the inclination to travel, “TV tourism” is becoming increasingly popular. In fact, one out of five travelers from around the globe has visited a place because hey, “I saw it on television.”

That's a great travel tip if you don't know where to go on your first around-the-world trip. Some programs offer a wealth of fascinating sites to explore, making them good foundations on which to plan an itinerary. It's not only travel shows we are referring to by the way. TV tourism draws inspiration from any program that takes you to a dreamy destination.

Wondering which program to use as a potential travel guide?

Documentaries and nonfiction programs, however, offer entirely different reasons to venture to exotic locales—to personally experience the world and to learn. One such television show is “Ancient Aliens,” which explores mysterious ancient sites from all over the world.

Below, our favorite destinations from the show.

You might not have to go as far as you think for historic grandeur. There are many important sites throughout Mexico with mysterious structures that have perplexed scholars and explorers for centuries.

One of such mystical sites is Monte Alban, a pre-Columbian site high on the mountainside of Oaxaca. Way off-the-beaten-path, it will remind you of a more isolated, compact version of Teotihuacan.

Further south you will find Palenque, an Archaeological National Park in the state of Chiapas. Its beautifully preserved pyramids, almost swallowed by the jungle, will sure blow your mind.

Speaking of the Mayas, did you know that they had some of the most advanced astronomical knowledge of any of the ancient cultures?

Their calculations were so accurate that their calendar had the world on edge on Dec. 21, 2012, with people around the globe holding their breaths while waiting to see whether life on Earth would end.

You can visit what many call their most impressive ceremonial city, Tikal. Located in Guatemala, it is, undeniably, one of the most dramatic Maya sites in Central America. Don't miss it!

Certainly among South America’s greatest mysteries are the Nazca Lines in Peru. Enigmatic figures ranging from animals to insects to geometrical shapes etched into land along the country’s southern coast of the country.

As the thousands of lines and shapes are best seen by air, many speculate on their origins and purpose. Were they agricultural and astronomical calendars?

Perhaps they were more? Some speculate they are signs from the gods or markings for extraterrestrial airstrips!

Differing views aside, they are believed to have been carved between 300 B.C. and A.D. 700.

Some of the world’s most iconic ancient sites are just across the Atlantic Ocean. Case in point? Stonehenge in England.

Dated around 2000 B.C., this ring of standing stones is located in Wiltshire—two miles west of Amesbury and eight miles north of Salisbury. The purpose of this enigmatic site is lost in the mists of time, however.

Still, that doesn’t stop historians, explorers, archaeologists, and spiritualists from speculating on its origins. Were they erected by aliens? We might never know.

Other mystifying sets of standing stones worth visiting in the United Kingdom are Avebury and the Isle of Harris in Scotland’s Outer Hebrides.

Likewise, Egypt is home to one of the most impressive, mysterious civilizations of antiquity. Pyramids—especially those in Giza—have dazzled and mystified explorers for millennia.

Once hailed as tombs, no bodies have ever been found in them, leading scholars and researchers to speculate on more mystical uses. Some posit that the Great Pyramids, which are built in precise astronomical alignments, were ancient energy machines that, combined with obelisks, efficiently distributed power around—and out of—this world.

Many are surprised to find that the United States is home to an ancient culture of spiritualists and mystics who looked to the skies for answers.

The Zuni Indians, for instance, are perhaps one of the oldest surviving indigenous peoples of North America who still live on ancestral lands—dotted with drawings and important sites.

The Hawikuh Ruins, in the state of New Mexico, is one of them. Part of a larger complex of surviving ancient ruins on the Zuni Indian Reservation, it used to be a thriving Zuni pueblo several centuries ago.

Get up and go!

Whether through “Ancient Aliens” or some other TV show, you don’t need a passport to discover prehistoric ruins and learn about ancient legends—just a sense of curiosity and wonder.

If you're about to hit the road and need some inspiration, TV tourism can be a real catalyst to explore mysterious and fascinating destinations far, far away. Bon voyage!

This story was brought to you in partnership with Royal Holiday Club.