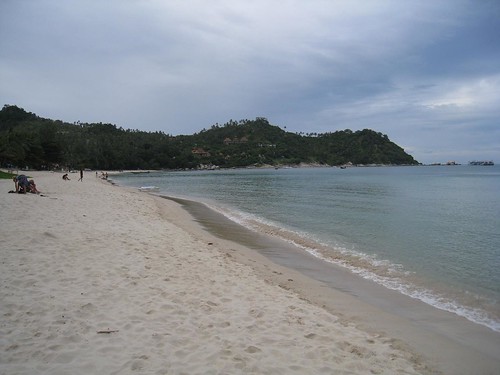 I spent the afternoon after the Half Moon Party playing card and dice games with Elizabeth and Nienke (who was feeling better) at the Beach Club restaurant. Steve and the American girl eventually joined us, and happy hour drinks turned into a beach bar crawl for the evening's entertainment.

Our second destination was the Flip Flop Pharmacy which was situated in the middle of the beach. The music there was a noticeable improvement.

Our third and final destination was the bar and restaurant at the opposite end of the beach. There, we ordered a little bit of food. I tried the calamari which tasted far fresher than any I'd had back in Virginia.

We finished off the evening with a night swim before retiring. I once again had to say goodbye to Steve who was leaving in the morning for an island in the Andaman Sea.