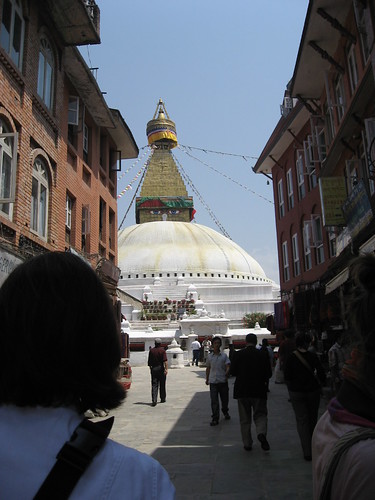 After a few nights at the historic Kathmandu Guest House in the heart of Thamel (Kathmandu), I was ready to escape the live cover bands and honking taxis for some peace and quiet.

I put my main pack in storage and grabbed a taxi east toward Boudhanath Stupa, an important site for both Buddhists and Hindus. 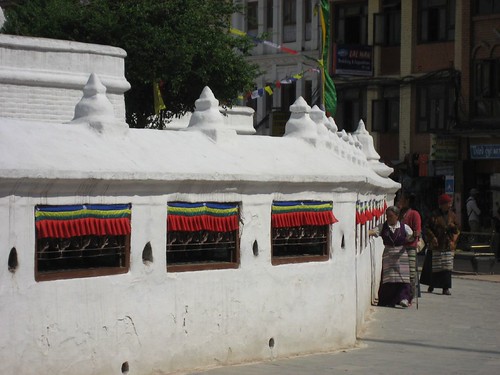 Upon catching my first glimpse of those all-seeing Buddha eyes, I knew I was going to spend my last few nights in Nepal nearby.

From sunrise to sunset, Nepalis, Tibetans, tourists and all circumambulate the stupa in a clockwise direction.

There is a palpable sense of energy created by so many people moving together.

One hundred eight prayer wheels are ensconced in the outer wall. 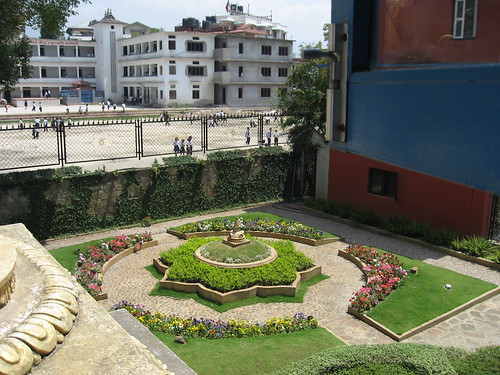 I booked a room at the PRK Guest House, which is run by the nearby monastery.

My room overlooked their garden and had a view of the courtyard of a school.

For half the price of the Kathmandu Guest House ($6/night), I had a better-decorated room with a fantastic view and a sparkling clean bathroom. I was delighted. 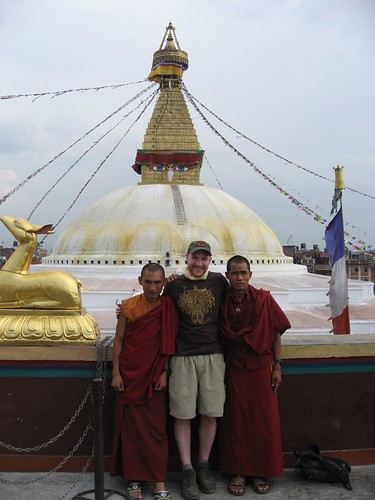 The stupa is surrounded by monasteries, restaurants, Tibetan souvenir shops and thangka schools which have grown up around it.

Despite the occasional motorbike,  it is a very tranquil space for pedestrians to stroll around. 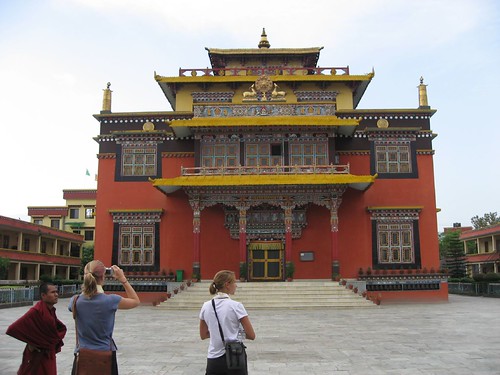 I met up with two girls from my rafting trip, Natalie (Canada) and Sara (Australia), around 4 pm.

One of the first places we went to was a monastery immediately opposite the stupa.

A few monks took to us, and I received a blessing, and we all received khatas (a traditional scarf given to a lama or teacher who blesses it and returns it to the giver). 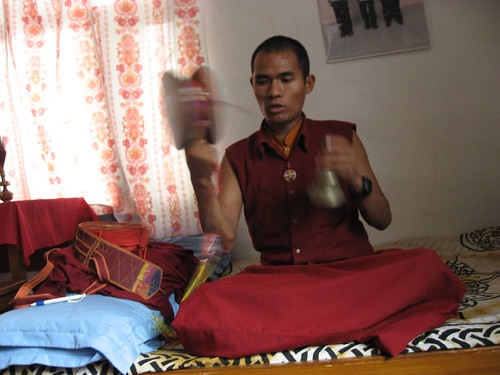 One monk, in particular, showed us a larger monastery nearby, and then a small orphanage he runs.

While we got the sense we were being kidnapped by the guy only to be asked for a donation, we all knew it was going toward a worthy cause.

Best you could edit the page subject title Blissful Boudhnath Stupa | Go Backpacking to more better for your subject you create. I liked the blog post even sononetheless.

Thanks for the reply Dave.

where is this PRK Guest House located?

I'll be heading to Kathmandu from Lumbini in December 2010 ... shortlisted a few guest house, and i'll want to stay away from Thamel since ive read a few post saying its a noisy place.

The post of content is very interesting and exciting. I learned a lot from here.The content from simple to complex, so all of you can come in . No matter you want to see what can be found.By the way ,there are some websites is also very wonderful,you can go and see.such as Jordan Pro Classic