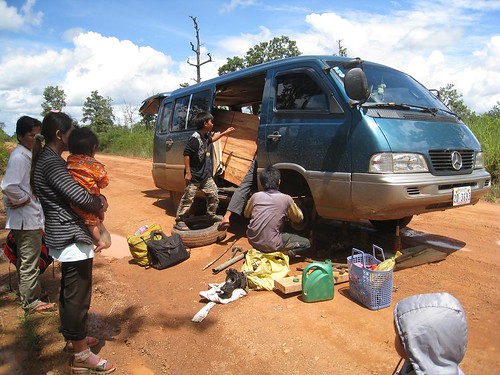 I was up early and in the hotel lobby by 7:30 am. My destination was Don Det, an island on the Mekong River in southern Laos. On paper, it seemed like a short 8-hour day, the worst of which would be the 4 hours riding dirt roads on the way out of Ratanakiri.

I was picked up at 8:15 am, and being the first in the van, I was able to secure a good seat. A large piece of plywood lay across the right side of the van's interior, making entry and exit just hard enough to be annoying. The bus actually departed town an hour later, packed to the gills with Cambodians and their luggage. Again, I was the only westerner, and to my knowledge, the only English-speaker, though at least I could lean back in my seat. As a bonus, I had the pleasure of being blasted with video karaoke at decibels louder than anything I heard on an Indian bus. For the record, I prefer India's music videos to anything else I've seen or heard in Asia thus far.

Around 11:45 am, our driver stopped to inspect the front right wheel well.

About 20 minutes later, we came upon a big truck filled with people, some of whom were pointing and laughing at our minibus. The driver stopped again, and this time, it was for good. Everyone exited the minibus and a few guys, along with the driver, began to take the front right wheel off, which involved an elaborate setup of wood from both within the bus, and along the road side. Apparently the jack didn't get the vehicle high enough on its own.

Meanwhile, I noticed everyone else had moved to shade on the side of the road, and with good reason. Standing on the dirt road, in the mid-day sun, was intensely unpleasant. I had my mp3 player with me but wasn't in the mood to hear music. The one time I start a bus trip without a full 1.5 liters of water turns out to be the time the bus breaks down in the middle of nowhere. Minutes felt like hours, and I started to wonder how long we would be stuck. Who knows how things work in Cambodia in such situations. I started to wonder whether I would need to tap my encyclopedic knowledge of Bear Grylls' survival techniques. The mud puddles by the road looked less than appetizing, and I was in no mood to scrounge for bugs.

After more than an hour of sweating and wondering, my patience finally ran out and I ambled over toward the driver who had also resigned himself to sitting in the shade after being unable to fix the minibus. Preparing to ask my “how long until” question using only body language, I was met with a response in English that a replacement car would be there in 10 minutes. He must've been shy, I thought, to have clearly seen me confused for the past hour and not offered up such useful information.

Less than 10 minutes later, a minivan pulled up with a man, a woman, and 12 bottles of water. I guzzled mine in an instant, and boarded our new vehicle while the rescuers set to work on the old one. As it turns out, minus the breakdown, it would've been a mere 3.5 hours on the dirt roads. Despite the breakdown, I was able to enjoy the scenery I couldn't see on my way to Ban Lung. There were far more homes than I thought, mostly set amongst farmland.

I missed my connection to Laos, and spent an uneventful night in Sleung Treng as a result.