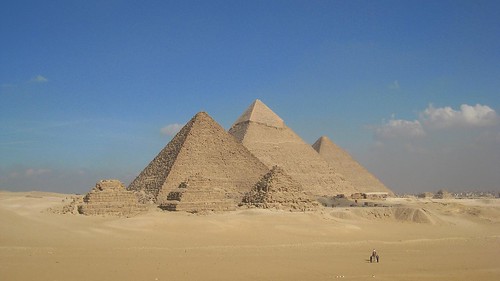 In 2001, I had plans to visit Egypt however 9/11 disrupted them and I'd had it on the back burner ever since.

In December 2008, I flew Egypt Air from Jo'burg to Cairo.  It was my first visit to a Middle Eastern country, and I was immediately struck by the dreariness of the Nile River as it runs through polluted Cairo.  But I found a room, smoked some sheesha, and walked like an Egyptian in front of the Great Pyramids.

As Paul Theroux said, “travel is only glamorous in retrospect.”

Hi Yoel, I was certainly in awe as we toured the Egyptian temples and ruins, and cruised along the Nile River, however it's not a country I feel the desire to return to.

The pics are really awe some...Pyramids in Egypt are worth visiting

Hi! Your post reminded me that some friends recently visited Egypt and came back with some real nightmare stories. They said the heat was really unbearable (they aren't usually complainers), she felt uncomfortable with how men seemed to stare at her blonde hair (hardly any women to be seen in public), and their train even burst into flame during a train ride at night. I got the feeling you were somewhat as underwhelmed as they were. Thank you for posting!