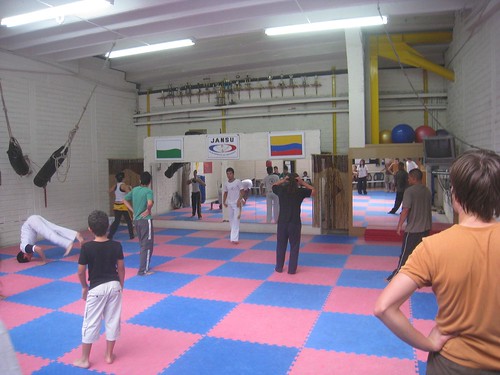 I met Martin (dressed in black) from Germany my first Friday night in Medellin.

He is working abroad at Universidad EAFIT for 6 months and has been practicing capoeira, the Brazilian mix of martial arts and dance, for several years.

He discovered two capoeira groups in Medellin. I thought I would go to watch a class held in one of the rooms in the city's big (soccer) stadium, however, he convinced me to participate too.

I was tired from the night before but managed to get involved and warm-up.

The instructor was a young guy, who spoke a little English, but for the sake of helping me to learn Spanish, stuck to his native language.

I actually found it beneficial since I could use visual cues to understand the instructions.

Plus it was fun. There were kids of all ages in the class, and best of all, it was free! 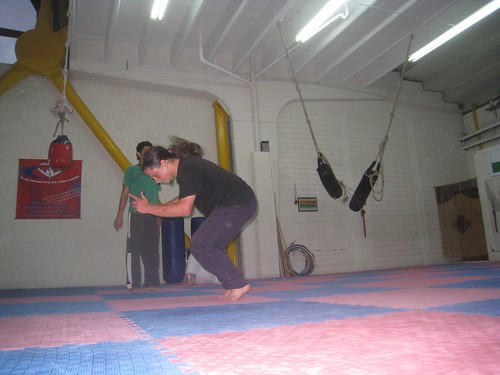 Martin wraps up a backflip

The initial session lasted about an hour. Martin was warmed up and doing some gymnastics, including backflips on every few minutes.

A lot of the more technical moves resembled the kind of breakdancing I had seen in clubs. We waited around for a while as more people began to arrive.

It was then that we learned a member of the group had recently died in a bus accident, along with many other people.

Apparently, the bus was on a bad road, and it fell off the edge.

As a result, the people were coming to the second half of the class were notably somber.

One of the people who arrived was the guy our instructor credited with introducing capoeira to Medellin.

He explained that capoeira is an upbeat activity, and as a result, while the group wanted to honor their friend, it was clearly not going to be a typical experience.

The class formed a circle and the more experienced members began to play the traditional instruments and drum.

Instructions for singing along were given, and as you can see in the video, sparring occurred. It was my first time watching it live.

Some of the girls in the circle were crying, and the moves remained slow as a sign of people's emotional state.

I felt moved after leaving the class. The capoeira group was yet another friendly community I was encountering in Medellin.

Their friend died in a freak accident, which reminded me none of us know when it is our time to go.

I had previously struggled with whether to return to the States and settle in Washington, DC, or New York City, but I walked out of the class with the desire to seize the day and continue digging into the culture and experiences Colombia has to offer…in Medellin.

i want to learn it

I don't have any info on the capoeira groups. You may want to join the Medellin group on Couchsurfing and post a message there.

Try asking around when you get there, especially college students you run into.

And by the way, what's leading you to move to Medellin? I began a blog during my time there: http://medellinliving.com