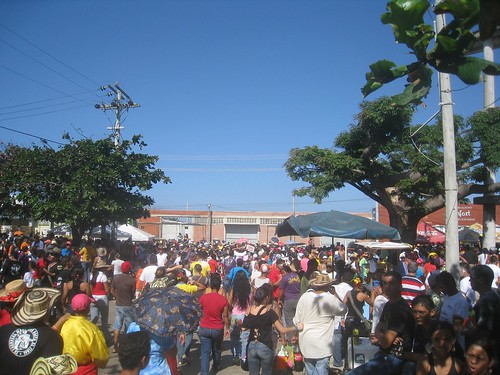 A group of us headed north in taxis to see the parade on Saturday afternoon.

I bought a traditional woven hat, paying too much because I didn´t shop around and didn´t want to hold off due to the intense midday sun.

Our groups splintered, but we mostly found each other after an hour or two, along with some new people. It was very crowded. 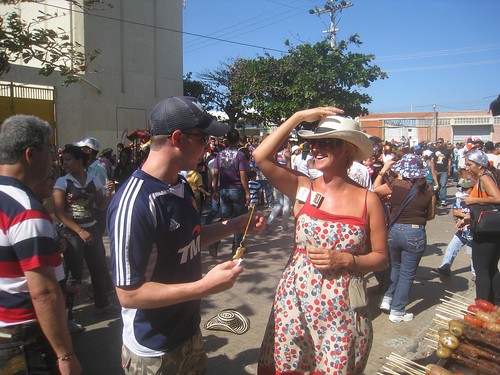 We found a great spot in the shade of a building to spend a few hours spraying each other with foam and drinking beers, rum, and Aguardiente.

Carnaval was really a family affair – little kids were everywhere, along with moms, dads, and older folks.

It was difficult to see the parade except for the people on floats because I´m short and a lot of people arrived early to get a good spot. 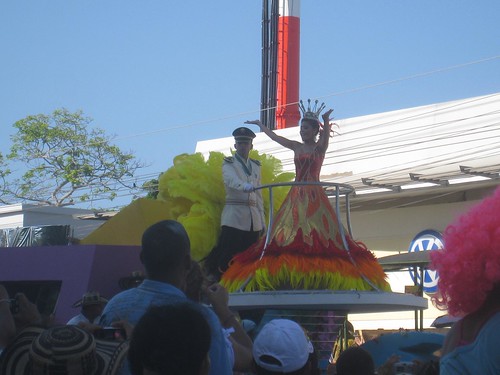 Jason, one of the Aussies, had his wallet stolen when we walked through a control gate to get to the parade route.

He lost $50 cash, and to add insult to injury, had a few more people (including little kids) try to rifle through his pocket the rest of the afternoon.

Needless to say, it angered him. I was glad to have switched to my board shorts right before leaving, so my camera and cash were secured in a difficult to access velcro pocket.

And despite my desire to get some photos this first day, when I held up my camera, I was often told by a Colombian to put it away because I was making myself a target. 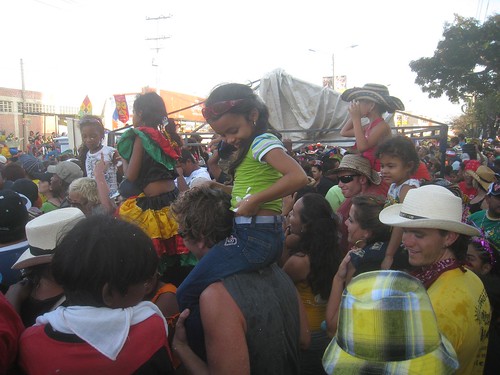 I didn´t move too far from our pack of Aussie-European-Americans, however, I would´ve liked to have met more Colombians in the crowd.

Actually, an architecture student named Marcia started talking to me in English at one point.

She invited us to a party she was hosting at her apartment on Monday, so I got the details with the full intention of checking it out. 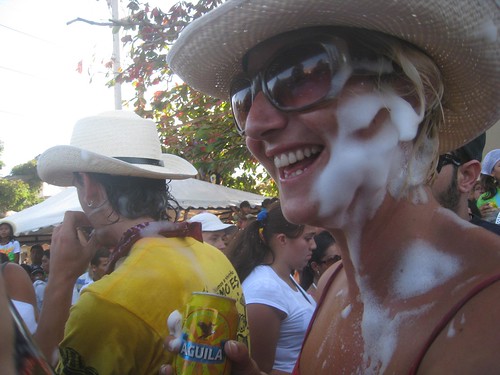 After the parade, it took some walking and patience to get a taxi.

Even when I got one, it seemed to have trouble finding the hotel despite the exact address printed on the business card.

Back at the hotel, I showered, ate a really bad pizza for dinner, and regrouped with the others. 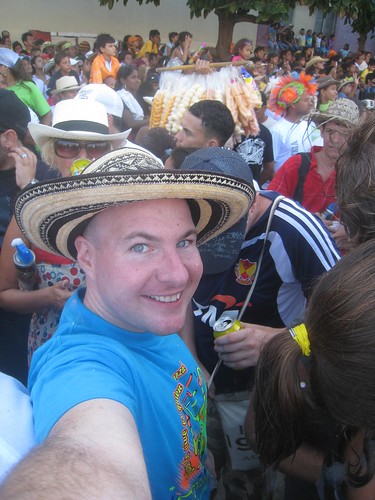 We took taxis to an area recommended by the hotel staff.

It was a city block with bars on both sides, loud music playing, and everyone hanging out on the patios and sidewalks.

People continued to spray each other with foam, and slap talcum powder on one another (regardless of whether you knew the person).

Most people reacted well, but I did my best to avoid the messiness at that point. And I left my camera at home so I wouldn´t have to worry about it. 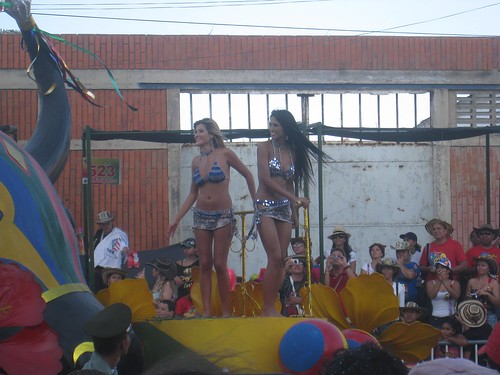 As much fun as others appeared to be having, I was longing for a more authentic experience.

I wanted to take a taxi and find one of the bars we´d seen before with just a handful of Colombians hanging out, dancing, and enjoying themselves.

Eventually, the area where we were hanging out was filled with couchsurfers, gringos, and what felt like every backpacker in the city.

I was too timid to leave the herd though and didn´t have any luck recruiting an adventurous soul to join me.

I became bored with the lack of circulation and eventually decided to take a taxi back to the hotel and call it a night.

The Irish girls and guys joined me.

It was in the downtown (old) part of the city. Hotel Olimpico is right in the middle of it, so you can just search Google for that name.

, the area where we were hanging out was filled with couchsurfers, gringos... do you remember qhere this place was at?