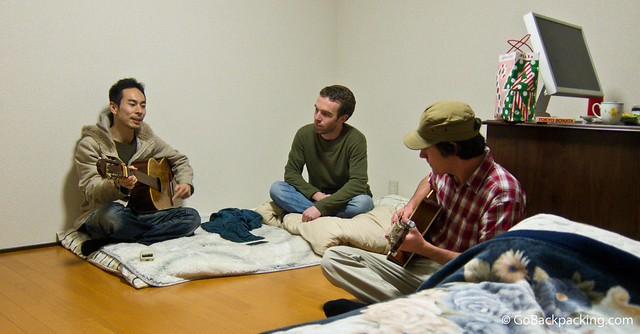 Jam session (from left to right): Kenya, Alexis, and James

A few nights before my flight to Japan departed, I logged onto Couchsurfing, pulled up the hosts in Tokyo, and sent out a handful of requests.

For a large city, the community was smaller than I expected, however by successfully couchsurfing such far-flung places as Tahiti, I knew it was worth a try.

In an instant, I had a local connection, a place to sleep for four nights, and an extra $160+ in my pocket from not having to pay for a hostel.

I would be couchsurfing Tokyo, and it would be my first stay as a guest in two years, the last one being a week I spent with a Colombian college student in Bogota.

Normally I wouldn't email an expat, however, the profile indicated his Japanese roommates both spoke English and would be around to talk if they had free time.

I always try to stay with a resident of the country I'm visiting first, as my primary interest is a cultural exchange, followed by the chance to save money.

I arrived at Narita airport after roughly 20 hours of travel from Washington, DC, I was able to quickly get through immigration and customs. I was packing light so I didn't have to wait for checked baggage.

I grabbed some money, ensuring my ATM card worked and went to rent a SIM card at one of the many telecom company desks set up outside the Arrivals area.

It was around 7 PM, and I was already running about two hours late due to the de-icing delay in Newark. 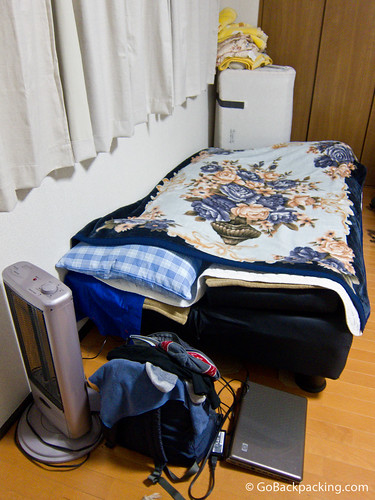 My futon for 4 nights in Tokyo.

We couldn't get a connection with my Blackberry using the rented SIM card, even though I knew my phone was GSM compatible.

Too tired to figure it out, I rented a cell phone, and tried to call Alexis to let him know I was late, but still on my way.

The number didn't work. I was walking around the Arrivals area like a chicken with its head cut off, worried I'd have to spend the night somewhere random instead of in the company of friendly couchsurfers.

Narita Airport, like much of Japan, doesn't offer free wi-fi access, so I paid for Internet access, verified I had been dialing Alexis' phone number correctly, and emailed him about the confusion.

I bought a ticket on the Narita Express train and figured I'd head toward his apartment.

I checked my rental phone again on the train platform, and Alexis had already called me back. I called the number, and he confirmed there was a misplaced digit in the number he gave me.

He also offered to meet me outside Ikebukuro station, one of Tokyo's biggest, and the one from which we'd walk back to his place about 10-15 minutes away.

I was waiting outside Ikebukuro for no more than a few minutes when I spotted him, and we greeted each other.

My favorite part about Couchsurfing, whether you're the host or guest, is that initial meeting.

It's almost always a high-energy conversation as if you're trying to get to know the person's entire outlook on life and travel within the first hour or two of knowing them.

I had the chance to talk with both of them each night and used the opportunity to clarify observations I'd made during the day about Japanese people, customs, and society.

Between the jetlag, and spending my days crisscrossing Tokyo, I had little energy to be social in the evenings.

I was asleep by 10 PM.  On my second morning, Alexis and Kenya woke up with me at 5 AM to go see the Tsukiji Fish Market.

I don't know if I would've done it on my own — and if I did, it wouldn't have been as fun.

When I arrived back at the apartment after a day trip to Nagano on my third day, James, an Australian traveling the country for three months, was settling in for a few nights stay as well.

He was traveling with a guitar, and I managed to shoot a few photos of all the guys playing together before I collapsed in sleep once again.

Ironically, Alexis told me that his first Couchsurfing experience was with a Japanese girl in an apartment above us.

He met his roommates while Kenya was living in the same hostel, and Rika was working there. The three decided to get an apartment together and immediately began hosting people.

I was their second guest, and Alexis said he was getting 8-9 requests a day. Considering it was Winter, I imagine that number could easily triple by Spring.

Great post Dave :) I have wanted to couch surf for a while now but I have always wussed out! This post is going to help me rethink it though. Meeting great people on the road is such a pleasure and couch surfing seems like an ideal way to do that.

I love CS and I've stayed and hosted dozens of people. I know what you mean by the 'first five minutes' of meeting your host/guest, I love that part. And then seeing how far you have built the friendship over the next little while. Thanks for the very 'happy' post Dave!

Fantastic write-up, I can't wait to hear more about Japan, I'm currently learning Japanese in addition to keeping my Spanish up to par and I really want to visit and live there for at least a few months.

8-9 requests a day is insane, I presume you got ridiculously lucky by getting him when you did?

Yea, it was total luck, but that's why you've gotta send out the emails and try, even in big cities.

I just couchsurfed for 20 of my 25 nights in El Salvador. It was an amazing experience and I learned a lot more about the country because of it! Hopefully I'll be able to do something similar now in Nicaragua.