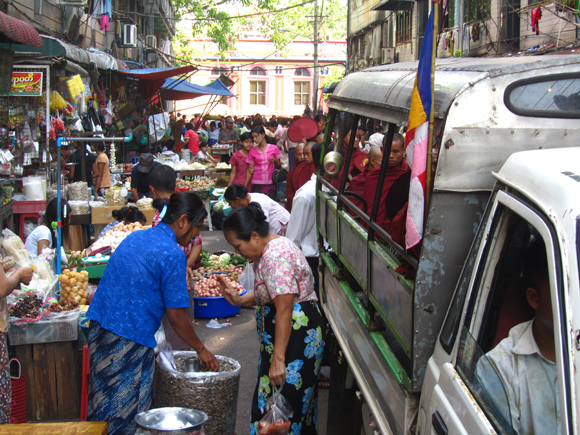 Naturally, awakening to the sunrise is a joy. The sounds of bird's chirping can still be heard before the roar of unmaintained trucks starts thundering through the bumpy roads.

I spent about two weeks in the city of Yangon Burma, and here are just a few things that would happen on an unplanned, but always eventful day.

Stroll Through The Morning Market

After waking up and putting on my clothes, it was time to take a stroll through the morning market.

The market was already bustling by the time I arrived.

It was filled with people selling fresh produce, recently butchered meats, ripe fruit, and a handful of already cooked delicious snacks and meals.

I stopped to grab a fantastic flatbread filled with boiled peas, combined with a few other spices.

It was reminiscent of a perfect bean burrito, but this was on the streets of Burma. 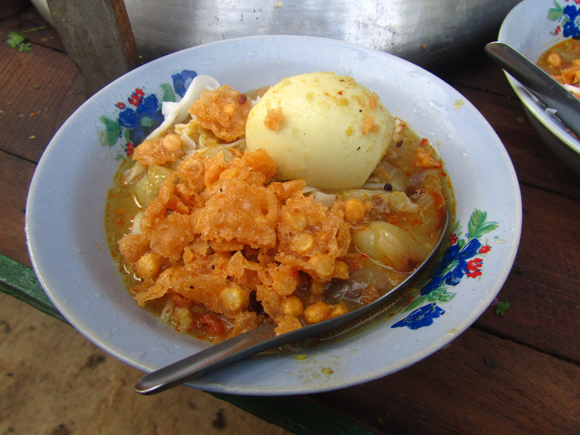 When real breakfast rolled around about an hour later, I went straight for a bowl of Mohinga.

Mohinga is one of the most popular dishes in Burmese cuisine, consisting of rice noodles in a thick fish soup.

It is often topped with crumbled up deep-fried chickpea fritters. The bowl of deliciously salty noodles makes a perfect breakfast! 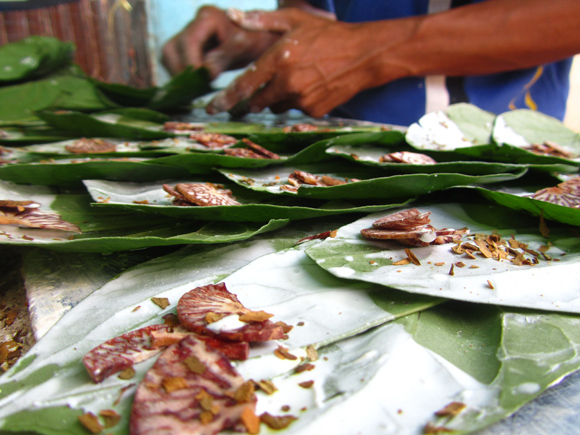 In this part of the world, chewing various combinations of betel nut (also known as areca nut) is common.

Ancient looking wooden stands are set up all over town with men that roll herbs and tobacco into leaves and gnaw on them all day long.

I do enjoy the taste of betel nut, but the red spit that foams up your mouth and the mark it leaves on your gums makes it not so appealing. 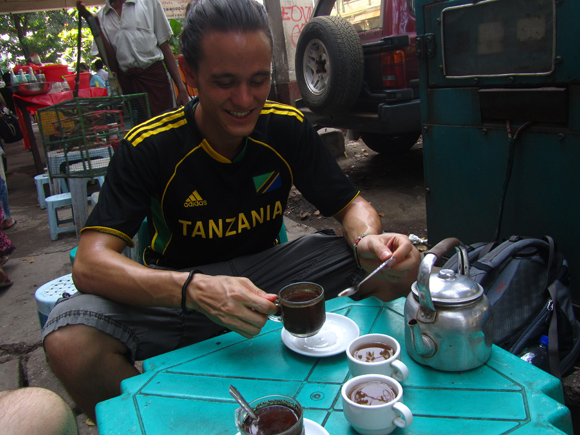 While walking aimlessly around town, I was hollered at by an older man sitting on a 6-inch stool drinking coffee and tea.

He was being served by an elderly woman who smiled at me and invited me to sit down as well.

With no plans on the agenda, I sat down and ordered up a cup of coffee and Chinese tea as well.

In Yangon, anywhere you sit, you will be served Chinese tea, and you can drink as much of it as you want.

Some of the people I talked with were willing to talk about the political and historical situation of their country. 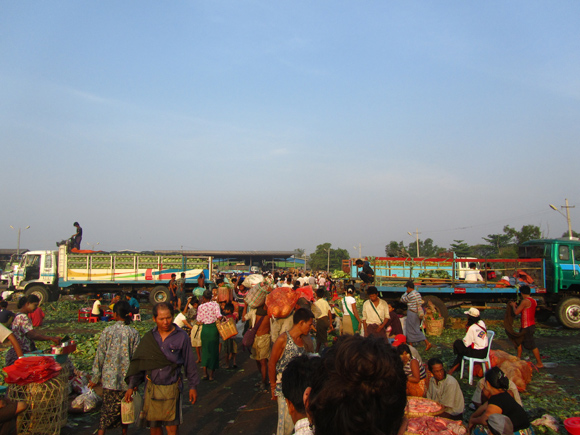 After a few hours of drinking tea and sitting around and chatting, I decided to whiz off to the giant distribution fresh market known as Thiri Mingalar market.

It is located about 10 kilometers out of central town, so I jumped in the back of a public transportation truck to get there.

Soon the truck was overfilled with all sorts of people carrying all kinds of random things.

The market was buzzing with business activity and the ever-present hustling of vegetables and fruits.

Along with eating, visiting local markets are another one of my favorite ways to observe the culture.

Thiri Mingalar market was an incredible glimpse into the lives and city of Yangon, and the local vendors were extremely friendly and approachable. 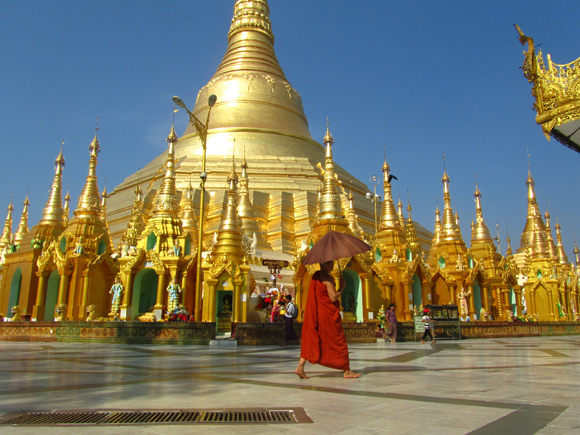 The most iconic and most holy religious site in Burma is Yangon's Shwedagon Pagoda.

This giant pagoda is known for its authentic golden bell-shaped stupa that rises to a height of 99 meters.

The very top of the stupa is a little chandelier like an ornament that consists of 5,448 diamonds and around 2,317 various precious gemstones. At the very very top is said to be a real 76-carat diamond.

It was indeed a fantastic site, and it was easy to spend quite a lot of time walking around the complex and gazing at the vast amount of gold everywhere. 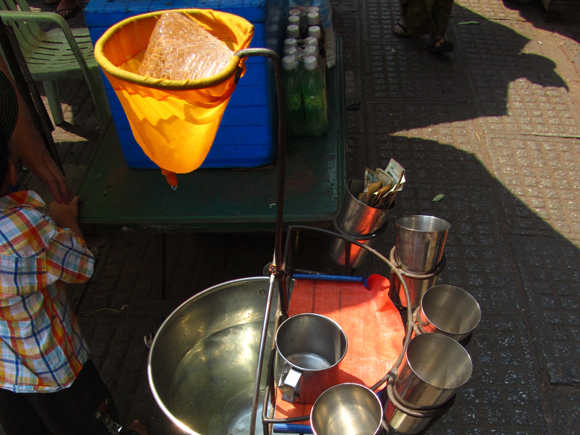 As the afternoon sun pelts down, it's essential to drink as much water as possible to remain hydrated.

Luckily, I wasn't the only person thinking like that: There are cold water stations set up all over town.

The picture above will do a lot better at explaining this, but basically, you pour a cup of water over the block of ice, catch it back into the cup, and you then have cold water to drink!

You leave a tiny bit of money in the money cup – on the honor system. 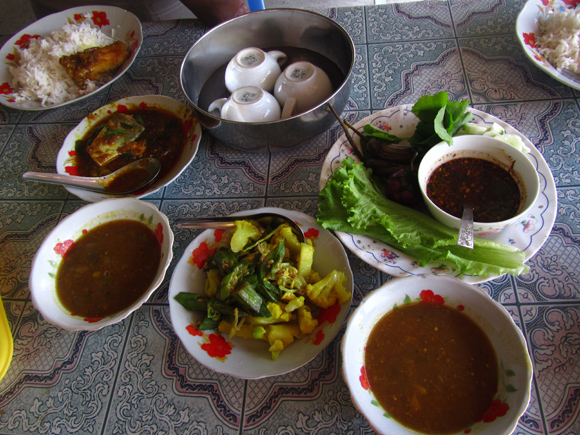 Burmese curry is famous, and though at times it can be a bit greasy, I'll admit that with a plate of rice, it's quite delicious!

Curry is available at many restaurants around town, from sit down to tiny street-side eateries.

Many of the curries are pre-cooked, but it's also possible to order up some stir-fried vegetables as well.

Football or Movie – and Tea

The nightly entertainment in Yangon involves sitting on the side of the street while watching a football (soccer) match or a movie.

After the sun goes down, the air is pleasant, and things settle down fast.

Of course, while chatting with a few locals and thoroughly enjoying ourselves, we sipped on a few pots of Chinese tea!

And with that, it was time to rest for the night to wake up in the morning and repeat another day in Yangon Burma!

Looks and sounds very interesting. I think I'll head there in few weeks

Careful of eating too much beetle nut--gives a nice buzz but can destroy your gums :/