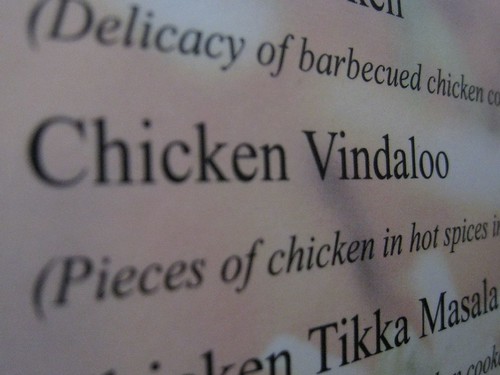 I dare you to eat an Indian dish called Vindaloo in India.

As my journeys in India have already come to a close, you might be wondering why I'm just now touching on the vindaloo dare.

My attempts to find the fiery curry dish from Goa towards the end of my trip ended in vain, and my ego wouldn't let it go.

The rooftop train failure I could handle, not trying a spicy curry I couldn't.

Backtracking to India, I received the dare while in northern McLeod Ganj, a Tibetan community more apt to offer Italian food (inextricably), momo's and standard Indian fare than a regional dish like vindaloo.

When I mentioned the dare to Marie, she said it was a dish that men ate in England after drinking to prove their manliness.

Apparently it was hotter than hell, and I was a bit relieved I couldn't find it right off the bat. 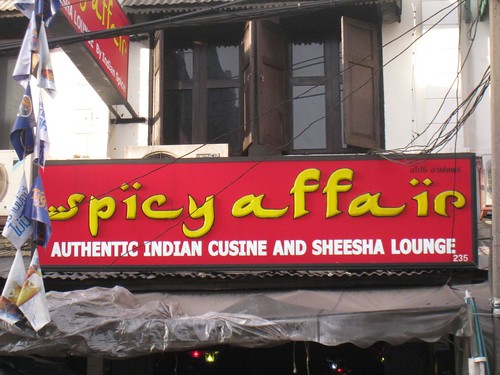 Surely Delhi, capital of India, would proffer such a feisty dish.My attempt to get a restaurant referral from a street hustler crashed and burned, and I was running out of time to hit the pavement around Connaught, so I mentioned the dare to Neil and his wife, who both offered to help me win the bet (to my great appreciation).

The clock was ticking.On my last night, we found a Goan joint in a Delhi restaurant guide.

Neil drove us over to the popular marketplace which he use to visit regularly with his mom.

Stalls offfered souvenirs and there was a food court with restaurants representing all of the regional cuisines of India.

The only problem was we were informed the Goan place closed shop.

Apparently vindaloo wasn't so popular in the big city. I was bummed, but Neil still took me to a great Italian place, The Big Chill, where I devoured some risotto and chocolate cake as my last supper on the Indian subcontinent. 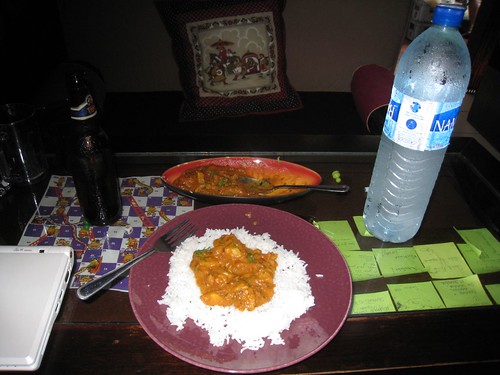 I ordered a beer to build nerve, a 1.5 liter bottle of water to soothe my tongue, and the chicken vindaloo.

It arrived quickly and I dug in only to find it mildly hot. Clearly, the mighty English would not prove their manhood with such a dish. It had been dumbed down for tourists.

I vowed to return and explicitly request an intenser heat, but I ran across another restaurant first, and decided to make my last stand. I didn't know what awaited me on the islands, so it was now or never. 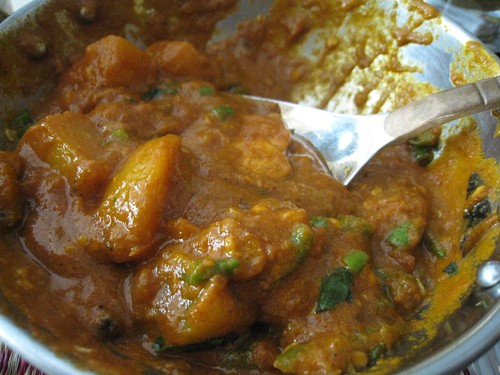 I told the waiter my plight for intensely hot vindaloo. We understood each other.

I skipped the beer this time, simply ensuring the water was readily available, along with a cooling dish of cucumber raita (yogurt).

I'm happy to report the curry was very hot. When I swallowed the green peppers, it sharply burned my throat.

My tongue, and to a lesser extent, my lips, felt hot for a good 10-15 minutes. I quietly hoped I didn't just sabotage my overnight bus ride.

Since I didn't pass out from the heat, or consume the dish in India, I am leaving judgment on this one to Jeff.

Do you need help planning your

I am just mad about Indian curries.

Do you need help planning your finances?

I am just mad about Indian curries.

HA! I love that place! My wife and I go there every time we're in Bangkok. They have awesome daal and some eggplant dish whose name eludes me that we love. Well actually I love everything from Spicy Affair; never had a bad meal there. And I can verify that the vindaloo is hotter than :twisted:

I liked the interior - I'd be happy to go back as well.