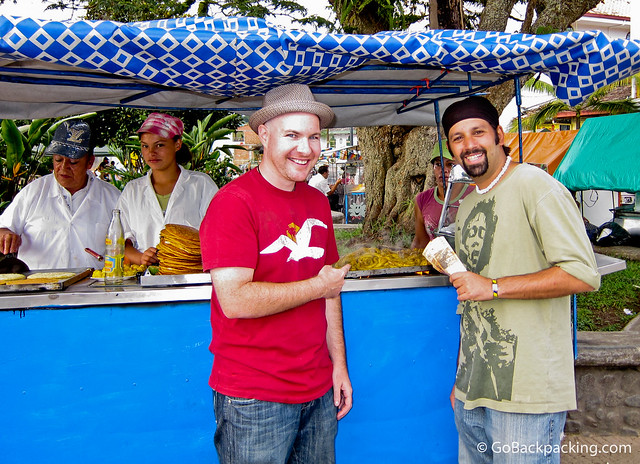 Troy (right) and I pose by the chunchurria (intestines).

Long time readers know that I asked people to dare me to do various activities on my trip around the world.  My last dare dates back to December 2008, when I ate sheep's head (specifically tongue and brain) in Soweto, South Africa.

Since then, the program had all but been retired, until that is, I was visiting the Colombian pueblo of Guatape with Go Backpacking contributor, and my friend, Troy from FOGGOdyssey this past August.  While we were waiting in the main square for another friend to arrive, he dared me to eat a regional delicacy known as chunchurria, or intestines.

The reward for completing this dare?  Enough money to cover the cost of the dish, or about $1 to $2. 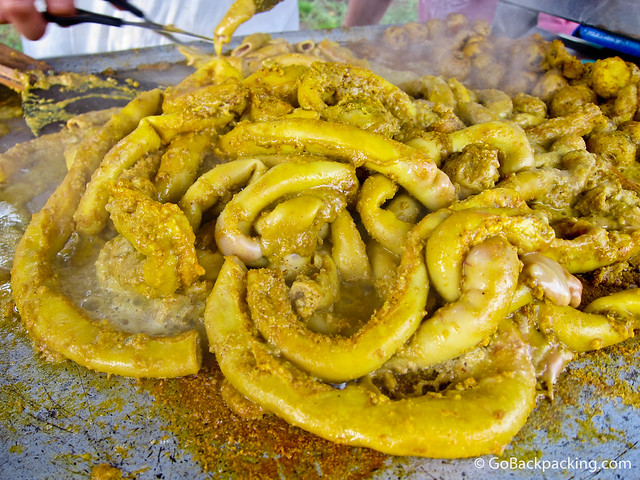 A giant pile of intestines cooks on the grill.

As with the rest of my dares, this was more a matter of pride than money, so I ordered a plate.  The female vendor was busily snipping the long pieces of intestines into more bite size segments using a pair of scissors.  The scene was as unappetizing as it looks in the photos.

The chunchurria was served on a small plate, with potatoes and an arepa.

I sat down and mentally prepared myself, while Troy grabbed my camera and set about recording the experience on video (a video of my many contorted facial expressions…I'm sparing you from watching). 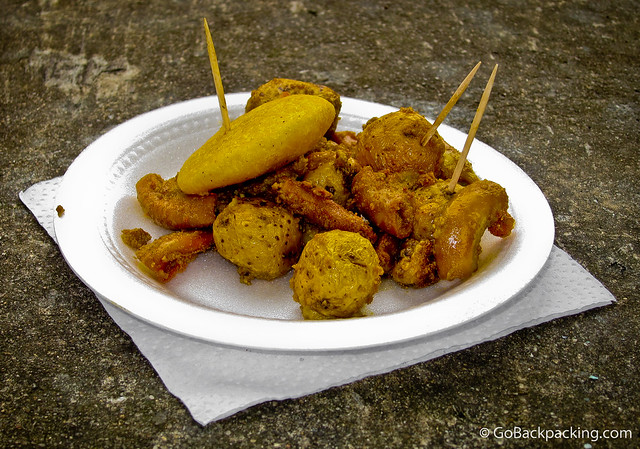 Chunchurria, served with potatoes and an arepa.

I poked one of the intestinal bits with a toothpick, and began to nosh on it.  And chew.  And bite.  And grind.

I chewed on the same piece for almost five minutes, getting nowhere in breaking it apart.  It was as if I were chewing on a bicycle inner tube that tasted like….well, intestines.  It soon became unnerving that I couldn't swallow the chunchurria.  I ate a potato, and bit a piece of the dry arepa, but none of it helped me break down the intestine. I didn't even have a drink to try and wash away the awful flavor that now filled my mouth.

Eventually, I spit out the intestine, which was 100% intact, and accepted my failure.

Later, I learned from a Colombian that rubbery chunchurria is a sign that it is undercooked.  I may give it another try some day, but I certainly won't be seeking it out any time soon!

I'm Colombian and I know this thing does look disgusting... But you should try the "chinchulines" or "chunchullo", which is basically the same thing but grilled (Argentinian style)... You can get them in Bogota at any good steakhouse. And trust me, it is a totally different thing!

Thanks Juan, I'll keep that in mind when I get back to Colombia. The first time I tried sushi, I didn't like it, but a few years later I tried again at a better restaurant and now I love it.

EW EW EW! Just looking at that made me gag majorly!

It's not raw, so I think I can eat that, but maybe throw up after :) Just don't let me eat insects, snakes and the like.

It would be cool if you post a photo or video while eating them. We would love to see your reaction while eating.

Hey John, thanks for reading. I'll consider posting the video of me trying to eat the stuff -- the only reason I hesitate is that it'll be an unedited clip.

Yeah that just sounds like it wasn't prepared right. That stuff is supposed to be crunchy and should break up easily when you bite it, something was wrong.

Maybe it was payback for making a commotion out of the whole experience.

Hey I think i said i would pay and buy you a beer! Yeah i know I am cheap but it did make for a funny posts (like i said it would) and a good story. Lesson learned but if we go to Quito, Ecuador I'll show you where Anthony Bourdain ate cow intestines that were BBQ and he liked them! I'll even eat them with you this time, cool! jajaja

Excellent, more intestines to look forward to, in addition to the guinea pig....in Peru.