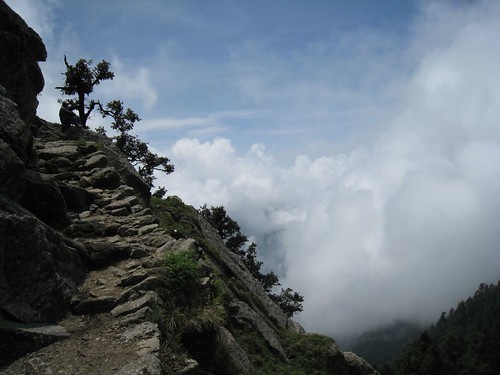 I was glad my headache had disappeared after 5-6 hours of solid sleep. Our second day was to be an easy one (2 hours walking, 300m gain) which would allow us to further acclimatize before the big climb on day three. Ashok cooked up some amazing banana porridge, omelettes, and toast which were served with tea for breakfast. Our plastic bottles were refilled with boiled water, the modus operandi for the next few days. 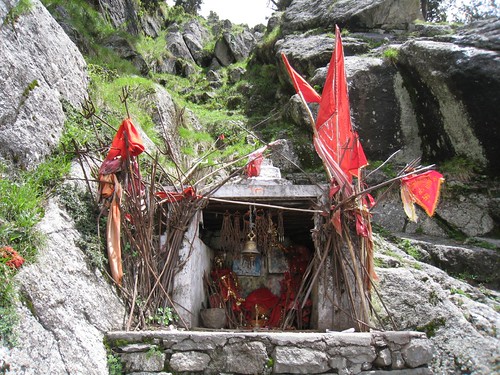 Around 10:30am, we started trekking.There were noticeable changes in the terrain at this point.The green grass seemed to give way to more and more rocks, some quite large. 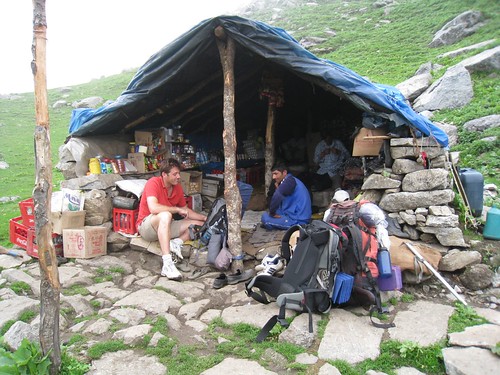 We stopped for an hour or so at the Snowline Cafe, the last place to buy a meal, snacks, smokes, or water before continuing on to the glacier and pass. We enjoyed some chai and chilled out before walking the remaining thirty minutes to our second campsite (elevation 3,200m), set amongst the rocky terrain adjacent the glacier, at the foot of the valley we would ascend the next day. 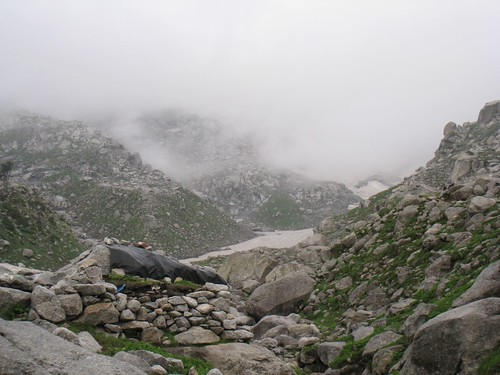 Once the kitchen was set up in a small rock shelter, Ashok fixed us heaps of Ramen noodles, a salad, biscuits, tea, and deep-fried potatoes and onions (my personal favorite). He said we were to eat a lot on this day. His ability to cook for hours in such small confines over just one gas burner would continue to amaze me. 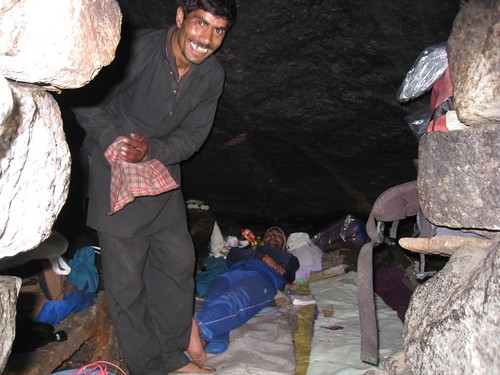 After lunch, Harold and I hung out in the tent, him reading, and me listening to music with a wet bandanna over my head to ease my sunburn. I developed another headache, though still thought it might be partly the result of the sun exposure. Either way, I decided to see how I felt in the morning before making any decisions. 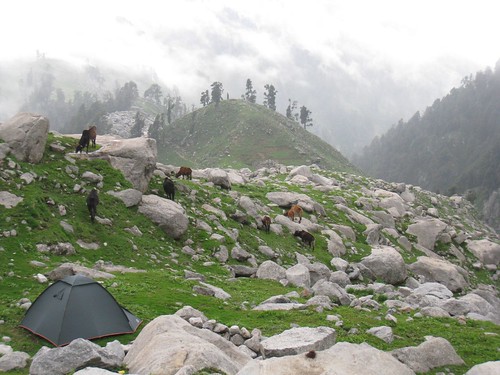 Before committing to sleep, I stepped out of the tent to use the same facilities as the cows and goats who grazed in the area. I caught a glimpse of one of the gigantic slugs common to this area. Around midnight, I awoke to Harold's vain attempts to scare away a bunch of cows around our tent. We knew they weren't the local black bears because of the ringing bells around their necks. Ashok had told us leopards were indigenous as well. 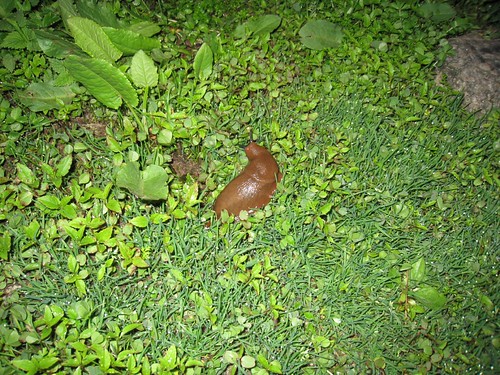 Thanks Dave! You're blog has been extremely helpful visualizing this trek for me. :)

And you mentioned you had a GUIDE + Porter?? Is a Guide necessary till Indrahar, Can it not be done easily with only a Porter and NO GUIDE uptil Indrahar?

Yes, I went through a company, which provided guide AND porter. That's my preference when trekking, especially at high altitudes.

No, you don't need both. The trail is pretty well marked, but when you start going up to the ridge between the two valleys, it just looks like a big pile of rocks. I don't think you can get lost, but it'd be easy to get off the trail and end up walking more than you need to.

I was planning to do Indrahar in OCT end, do you have the contact information for the Porter Ashok and was he really safe to hike with?

Yes, I felt safe with our guide and porter, but no, I don't have their direct contact information.

The only thing I can suggest is to visit the office of Eagle’s Height Trekkers and ask about them there.

I have question maybe stupid :) How do you managed to connect and update the blog?

Internet cafes...I spend time in them almost daily. I even bought a laptop in Honk Kong so I could so some of my writing offline to cut down on the time on the internet (which always costs money).

I have question maybe stupid :) How do you managed to connect and update the blog?

Internet cafes...I spend time in them almost daily. I even bought a laptop in Honk Kong so I could so some of my writing offline to cut down on the time on the internet (which always costs money).

I'm with Wendy, I was reading along and I thought you took a picture of your 'business' that you went to do with the cows!

Love the 'store' as well. Great stuff. What an amazing trek!