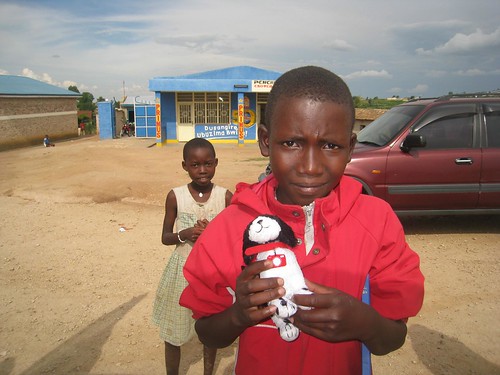 A Rwandan boy poses with Foto, the symbol of the Dog Meets World project.

I met Carolyn Lane at February's #DCTravel tweetup, before heading off to Rwanda.

She introduced myself, and us all, to Dog Meets World, a photo diplomacy project she was developing.

Carolyn explains her vision as follows:

My dream is to establish a movement to photograph the children of the world.

To seek children in their own settings, print their image to keep for a lifetime.

We have replicated Foto, the stuffed dog, to enable scores of world travelers to participate with this intentional project.

The dream of Dog Meets World is to empower travelers to make real connections to people in other cultures, in essence to become photo-diplomats.

When Carolyn explained her vision to me, I instantly identified with it based on my personal travels through such countries as Cambodia and Nepal.

She offered to loan me a small inkless Polaroid printer for my Rwandan adventure so I could participate.

In addition, I bought several packets of the special Polaroid paper that must be used. I think $20 afforded me 60 prints. 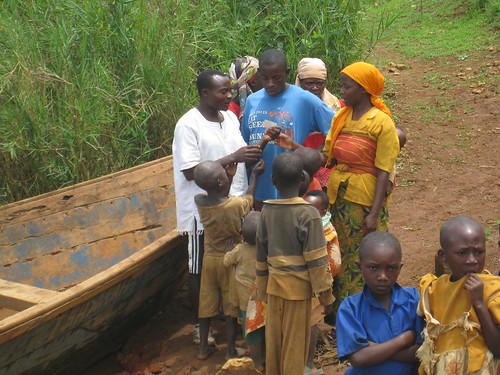 A Rwandan child shows the adults a photo.

Rwanda is full of children, so there was no shortage of opportunities to take photos and print them off right then and there.

At times, I would be completely surrounded by 20 children, all curious about me, and the camera and printer I was holding above their heads.

Eventually, I learned the value of crowd control or putting myself in a position that allowed enough space for the printer to work its magic.

For example, when we made stops along the road, kids would often come up to our SUV.

I'd simply roll down the window, offer Foto, the stuffed dog for them to pose with, and take a picture.

It took about one minute for a photo to be printed out. The kids seemed to love it.

After I gave one boy or girl a photo, he/she would often show it to the others.

The language barrier was never an issue when it came to these interactions.

Many of the kids seemed familiar with the fact that they could see themselves in the displays of digital cameras, however, I'm fairly certain, few of the ones I photographed had ever received their own picture. 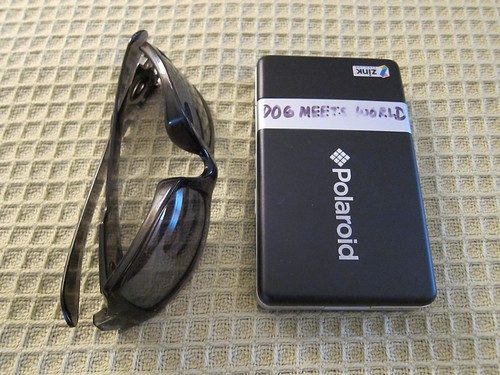 When I returned from the trip, I was able to upload the photos I took to the Dog Meets World website, and Carolyn featured two of them on the blog.

Overall, I greatly enjoyed the opportunity to photograph Rwanda and it's people while being able to give something back to them in the process.

According to the Dog Meets World website, over 4,000 photos have been given to people across 4 continents.

I love this idea!!!!!! I always take joy showing little kids photos that I've taken of them when I travel. They get so beyond excited.

What an excellent mission to be a part of. I like the idea of being able to show the children something other than their picture on the camera screen - an image they can take for themselves. Great idea.

Hey was just checking out your blog and you have some amazing content. We will be sure to come back visit on regular basis. Making sure we rss you so can stay up to date when you post new content. Me and family are on 3 year trip around the world feel free come check us out as well.