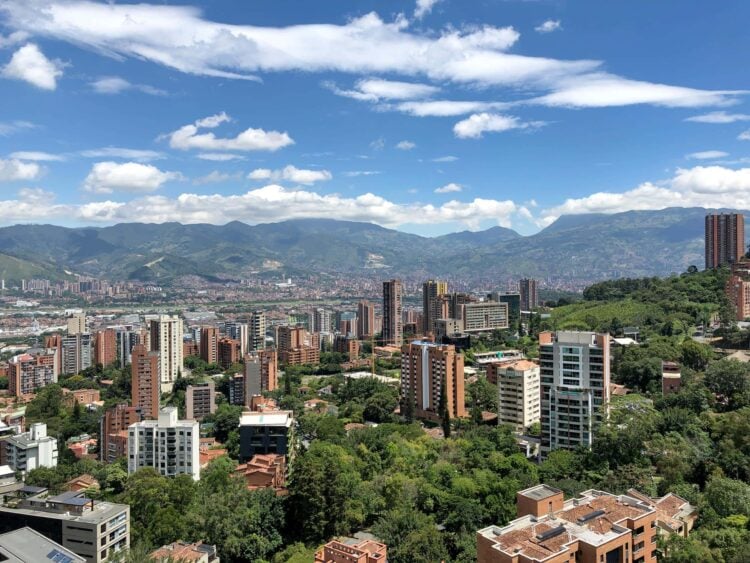 The funny thing about dreams is that once you achieve one, you become a heck of a lot more self-assured about what you can do in life.

I'm hardly an impetuous person, so it took me five and a half years to embark on my dream trip around the world.

And as those travels became fully realized, it was only natural to take stock of the new me, and come up with a new dream to pursue.

Last year, my experiences traveling and blogging coalesced into one succinct desire:

I want to make enough money from blogging to live and work anywhere in the world.

Four months ago, my parents sold their house in Virginia, and I knew it was my opportunity to take a leap of faith and see if Dream 2.0 was feasible.

I moved back to Medellin, Colombia, to continue building a location independent business from a foreign city I already knew and loved.

While I've been tracking my monthly online income for four years now, I had no way to predict what would happen going forward.

Would building websites continue to pay off, affording me the lifestyle I sought in Colombia and beyond, or…

…would I have to return home in a few months, tail between my legs, with my meager savings, once again depleted?

Thankfully, I can report that my income has risen to new heights since leaving home.

To paraphrase Paul Coehlo from The Alchemist, when you really want something, the universe conspires to help you achieve it.

And the lifestyle I imagined for myself those 11 months living and working in my parent's spare bedroom, including location independence, is now my day-to-day reality in Medellin.

I've settled into a new, 20th-floor apartment with mountain views.

He has a genial old Labrador named Tobias who lays around all day, ensuring my blood pressure never gets too high.

My other roommate, Jorge, is a friendly medical student though hardly ever around.

It's a 10-minute walk to the gym, which I try and hit three times a week.

And it's a 10-minute walk in the opposite direction to the dance studio where I take private salsa lessons.

I've made a few good friends since returning, developed an appreciation for babies, and had more than a few fun dates.

I've continued to explore Colombia, visiting big cities such as Cali, and small pueblos like Guatape.

My Spanish is better than ever, and if I dedicated time to studying it every day, fluency wouldn't be far off.

However, in spite of all the positives that come with this new lifestyle of mine, I've had a nagging feeling that I could be managing my time better.

I have a half dozen different projects I want to pursue, yet I've not started down the path to developing any of them since leaving home.

While I'm making enough to keep the same course in Colombia, or any number of other countries such as Thailand or Argentina, I need to work a little harder if I want to continue to see more of this world, and live in places which light up my imagination: Rio de Janeiro, Venice, Paris, New York City.

To add, I have a similar goal, but maybe not the desire to live somewhere else all the time since I like my home a lot.

Wow, very inspiring and I love the alchemist book, it's awesome especially because it gives you the message in a different way.

Wow! I read your blog and follow you on Twitter, but I had no idea you had such an inspiring story! It’s funny but my parents selling their house was also an impetus for me to follow a dream of mine – living for some months in France.

I studied French literature at university, and all of my fellow French lit concentrators participated in the study abroad program; I was unable to go (was also pre-med and somehow I couldn’t imagine studying biochemistry in French). After uni I moved back to my hometown and was living in my parents’ house. My life was pretty comfy, and I thought my time for study abroad – to actually live in Paris – had passed.

However, when my parents moved, I decided to go for it. I took a gamble finding a place to live online and buying a ticket all within a very short time. I was a bit scared to move to a new country with only a vague idea of what I was going to do, but my experience there turned out to be exactly as I had pictured – better actually!

Unfortunately, the older I get, the more risk-averse I become. It happens at the present moment I am at one of those jumping points in life, just like the one you described;I therefore found your blog post very timely. I too am a big fan of The Alchemist and its amazing message and love to see real-life examples.

I actually remember reading your story before, and responding! I'm not sure what happened, but thank you for taking the time to share again.

I've found living abroad better than I imagined it as well. At the end of each 6-month stint in Colombia, I really don't want to leave!

Great synopsis of commenting and how to very well written and all that link love you just poured out, great post, if this was a forum you would have a sticky on this.

We just couldnt leave your website before saying that I seriously enjoyed the high quality information you supply to your visitors? Will be back soon to check up on new posts