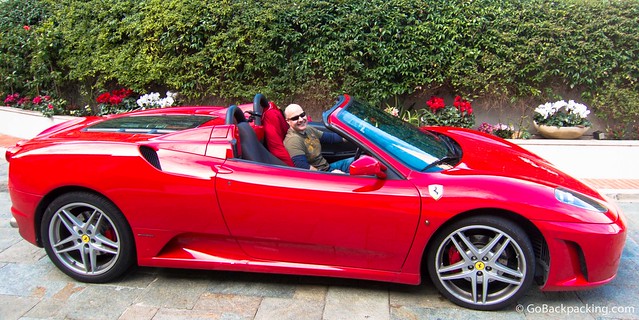 In the driver's seat of a Ferrari F430 F1 Spider

“Accelerate, more gas, up” were the refrains of my French instructor, Philippe, as I drove the 489-horsepower Ferrari F430 F1 Spider through the French Riviera.

Navigating narrow lanes, hairpin turns, and bicyclists were just a few of the challenges I faced during the Ferrari Driving Experience by GetYourGuide.

If I had a bucket list as a kid, driving a Ferrari was most certainly on it.

I was a regular at the New York Auto Show growing up, and it was the Ferraris and other exotic sports cars that always captured my attention. 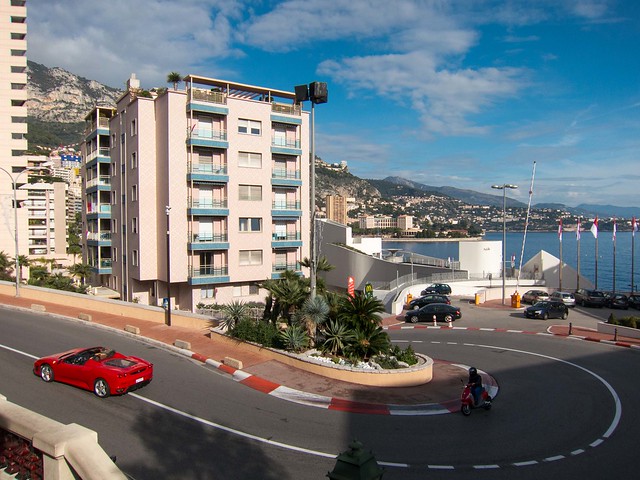 The Ferrari driving experience can be done from three different locations in the French Riviera:

I chose Monaco, home to the annual Monaco Formula 1 Grand Prix, and was instructed to make my way to the Fairmont Hotel.

Upon arrival on a quiet Monday morning, which happened to be a national holiday, I noticed a sign proclaiming the Fairmont Hairpin, the slowest turn in the Grand Prix, to be the most famous curve in the world.

This picturesque curve was the perfect place to both start and finish my drive. 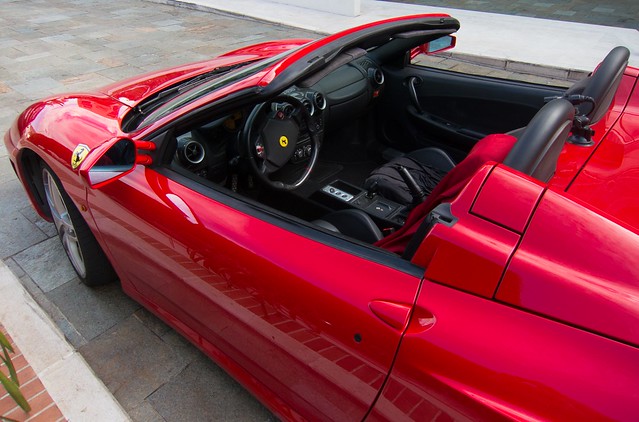 A closer look at the driver's seat

Philippe arrived at 11:15 AM, as scheduled, and the sexy red Ferrari had me drooling before I even opened the door.

It was a convertible, but because the skies were still overcast, we didn’t put the top down for the drive.

Of course by the time we got back, the skies were blue and sun was shining.

He briefly explained how to start the car and put it in gear.

I’ve never driven a manual, so I was a little anxious about the idea of learning in a Ferrari on foreign roads, but it was immediately apparent that these cars are different. 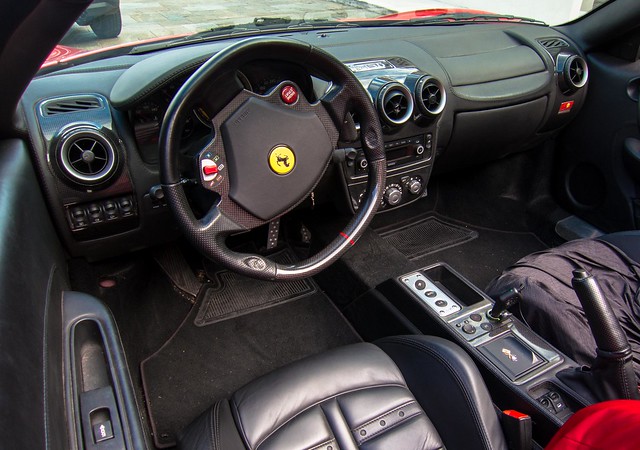 There’s a paddle-shift system on the steering wheel, as easy to use as a video game controller.

Best of all, there’s no clutch to worry about.

For the record, the fastest car I’d driven in my life until this point was my old, turbocharged 180-horsepower Volkswagen Jetta. 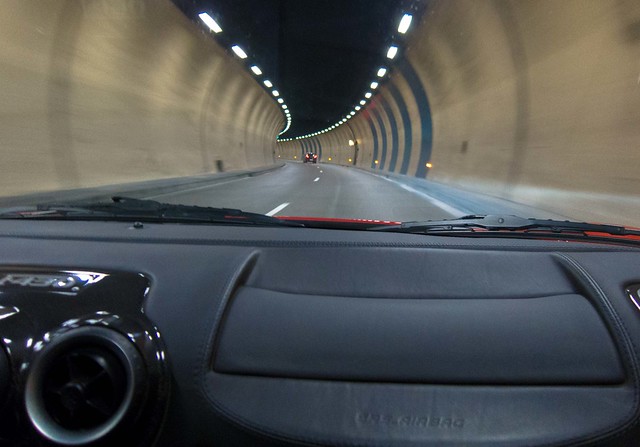 Driving through a tunnel in Monaco, en route to the French border

Unfortunately, while I thought it’d be cool to drive around Monaco, it’s actually not allowed, and Philippe therefore had to drive us back to France before I could get behind the wheel.

To do so, we passed through a series of long tunnels I wish I’d been able to drive through myself. They offered the longest, traffic-free sections of road during the whole experience.

Once we exited the last tunnel, Philippe pulled over to the side of the road, and we switched places. Suddenly I was behind the wheel, driving, and I wasn’t even sure how to use the turn signal!

I was nervous, and said as much to Philippe, who had a way of taking my mind off the fact that I was driving an exotic car.

He knew the roads, and guided me along them with the precision of someone who has been doing so with tourists for the last 4 years. His first priority was taking care of the car, therefore you won’t see any photos of me in action.

The 489-horsepower, 4.3-liter, V8 engine let out a constant hum as I drove. My eyes were so focused on the twists and turns of the road, I didn’t dare look down at the speedometer.

If Philippe wanted us to go faster, he said as much, but I continued to exercise restraint, for fear of going too fast, and sailing off one of the cliffs, or careening into the mountain walls.

The car may have been as easy to drive as one in a video game, but the consequences of crashing were never far from my mind. 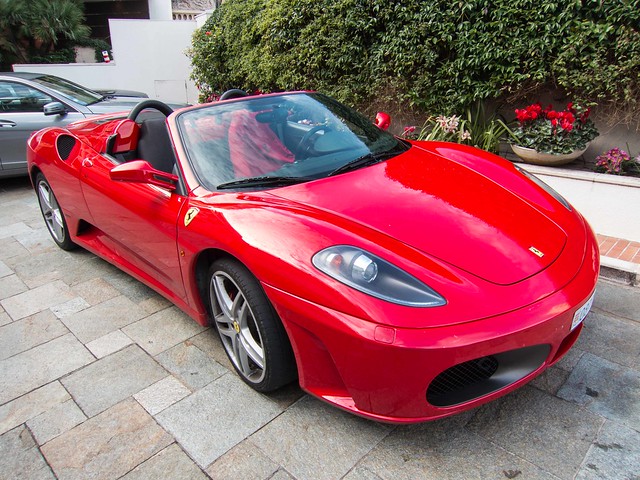 The Ferrari parked outside the Fairmont Hotel

After the first 10 minutes, I began to feel more confident in the car’s handling and shifting. Keeping my foot off the brake pedal proved to be a hard habit to overcome.

We entered Eze village, which is the pick-up point for the most popular drive, the 15-minute experience. If I’d chosen Eze, then I would’ve been behind the wheel the whole time.

For that reason alone, I recommend either Eze or Nice as the pick-up point instead of Monaco. Driving from Nice, as well as Monaco, require signing up for the a minimum 30-minute drive. There’s also a 60-minute experience available.

During my 30-minute experience, I lost about 8 minutes to driving in/out of Monaco, and another 3 to 4 minutes when we encountered traffic due to road construction in the village.

And when you’re driving a Ferrari in the French Riviera, a once in a lifetime experience, every minute counts! 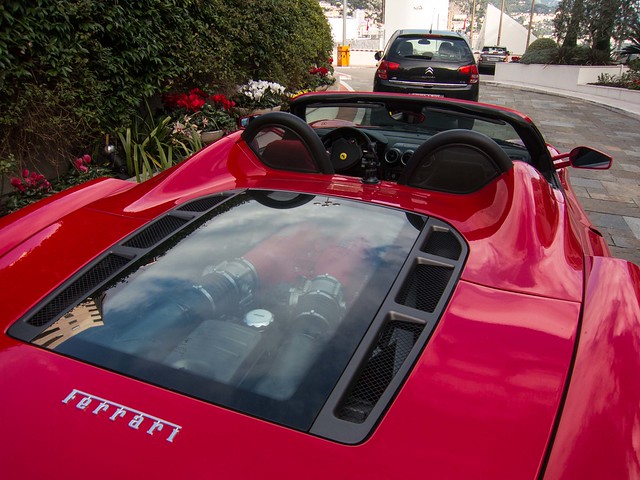 View of the V8 engine

“You have to respect the car,” Philippe said, as we waited in traffic.

I took the opportunity to ask him about his typical customer. 60% come from Australia (where the same car costs $650,000), followed by Brazil, and then all other countries (including France and the USA). The fewest customers come from Italy, where Ferraris are manufactured.

The high season runs from late March to mid-October, when Philippe is booked 9 to 10 hours per day, 6 days per week.

Once we passed through the heart of Eze village, I soon found myself navigating a series of hairpin turns, as we wound our way back down the mountain.

There are more mirrors in an American shopping mall parking garage then I saw on those narrow roads. But as I came through each turn, Philippe offered encouragement, and my confidence rose.

Before I knew it, we were approaching the edge of the French border, and I was pulling over to give up my seat behind the wheel.

Philippe drove us the final few minutes back to the Fairmont Hotel, where I exited the car on an adrenaline high of a new kind.

The kind you get from driving a Ferrari in the French Riviera.

Disclosure: The cost of the Ferrari Driving Experience was waived by GetYourGuide for the purpose of this review. I also received a 20% discount off the cost of the video.

why is it not allowed to drive in Monaco ?

While I am not all that into cars (I would be the cyclist on the road you are making sure to avoid!!!!), and I certainly don't drive stick...if I were to want to learn....this would surely be a great way to start! Love the ferrari red!!