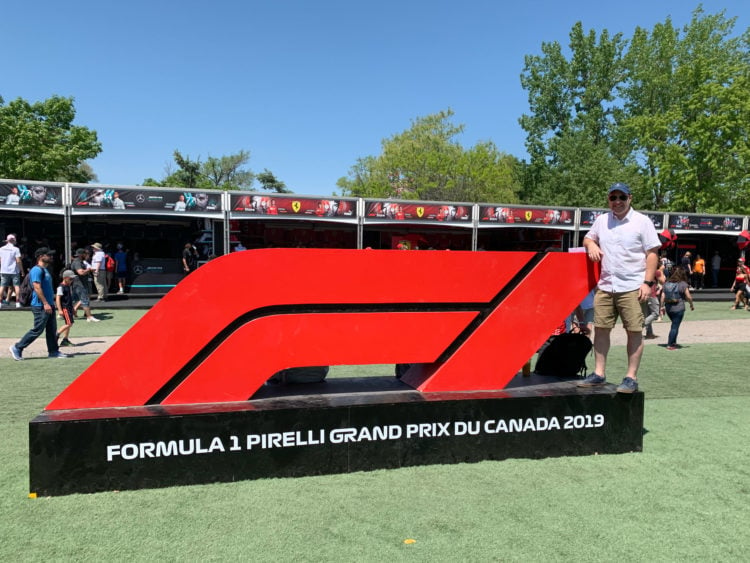 In June, I flew to Montreal to attend the Formula 1 Canadian Grand Prix, visit my friend Jodi, and get to know the city better.

Before moving to Austin, Texas in 2016, I wasn't at all familiar with F1 racing. The idea of traveling to see a car race had never occurred to me.

I'd visited Monaco and seen the famous Fairmount hairpin turn, but only because it's where I got picked up for my Ferrari driving experience.

Austin, however, is host to the annual US Grand Prix every October, so I've been twice now with a friend who is a huge fan.

Experiencing a Formula 1 race in person doesn't get any cheaper than watching it in your city for the cost of a general admission ticket ($100) and an Uber ride.

The weather was beautiful for both races, and while I didn't have a favorite driver or team, it was a fun way to spend a Sunday afternoon.

What began as a curiosity in my backyard turned into a growing interest in following Formula 1.

Naturally, I began thinking about where else I could watch a race without breaking the bank. Montreal and Mexico City made the most sense.

I first visited Montreal in the spring of 2016, a month after moving to Austin, and loved it. I'd wanted to go back ever since.

The Canadian Grand Prix became my motivation to book a flight.

I was also excited to go back so I could check out more restaurants for my food blog.

Once the decision was made to see my first Formula 1 race in another country, it was time to do some research.

I binge-watched “Formula 1: Drive to Survive” on Netflix (see trailer above).

This beautifully-shot series takes you behind the scenes of the 2018 F1 race season as you get to know the teams and drivers.

Learning backstories and getting clued-in to the drama and politics of the sport upped my interest even further.

I also watched “Senna” an incredible documentary about Brazilian driver Ayrton Senna, a three-time F1 champion, who died tragically in a race crash at the age of 34.

Now that you have a sense of where I'm coming from let's head to Montreal for a taste of Canadian Grand Prix weekend.

I used points from travel hacking to fly United Airlines from Austin to Montreal, arriving on Wednesday.

This gave me three full days to explore the city, try some restaurants, and see my friend before the main event.

For accommodation, I stayed at the Hotel M Montreal in the Gay Village neighborhood.

More of a boutique hostel than a hotel, it was only a few minutes walk to the metro, and from there the racetrack was just one stop away.

Several of the guys in my dorm were also in town for Formula 1.

I learned there was an overlap between race fans and foodies when I met another American F1 fan while eating dinner at Joe Beef, a favorite of Anthony Bourdain.

The next night, I ran into him again at Au Pied de Cochon, where I also met a California woman in town for the race.

Events related to the Canadian Grand Prix began Thursday evening, with the track opening to ticketholders on Friday.

Tickets are sold by the day, and I only bought a ticket for the final race on Sunday.

At least one of the guys in my dorm bought a 3-day ticket entitling him to all the events at the racetrack, including:

In addition to watching the F1 drivers, there were lots of Porsche and Ferrari driving challenges on the track, and activities for fans at the Monster Energy Compound like skateboard and freestyle moto demos, DJs, and live music.

I spent the day before the race visiting my friend and checking out the scene on Crescent Street in downtown Montreal.

I spotted one of Lewis Hamilton's old F1 race cars on display outside the Ritz Carlton, along with a pristine red Ferrari 488 Spider, like the one I drove in Maranello last year.

The Crescent Festival celebrating the Canadian Grand Prix was celebrating its 20th anniversary.

A DJ was performing, and the streets were full of race fans and curious locals wandering about.

There was a pit-stop challenge where you could try your hand at wielding the machines used to change F1 car tires.

And there were at least two Lamborghinis on display, one white and one purple with white rims.

The festival also featured lots of food stalls, and there was easy access to the neighborhood restaurants as well.

I knew race day would involve large crowds, so I didn't linger long at this event.

Sunday morning was the big day, and arriving at the Circuit Gilles Villeneuve from the Hotel M Montreal couldn't have been easier.

I walked five minutes to the metro Station Berri-UQAM and took it to the Jean-Drapeau station one stop away.

This metro station is on St Helen's Island in the middle of the St Lawrence River.

One of the first things you see exiting the metro is a geodesic dome built for the 1967 World Expo. It's now part of the Biosphere Environmental Museum.

The Circuit Gilles Villeneuve is on a second island accessible by foot from the metro station.

The walk from the Jean-Drapeau metro station to the racetrack, including passing through security and crossing a bridge over the St Lawrence River, only takes about 15 minutes.

I arrived two and a half hours before the start of the race, leaving me plenty of time to walk around.

Fun fact: Montrealers steam their buns and refer to their hot dogs as “steamies.”

It was a hot sunny day, and my seat in Grandstand 34 inside the hairpin curve offered no protection from the sun.

I'm glad I got some food in me early as the lines grew a lot longer as the start of the race drew near.

Credit to the guys I saw walking around in such heat with bowls of poutine (gravy-covered cheese curds and french fries).

The fan zone once again featured opportunities to try your hand at changing tires. This seemed to be a running theme!

I watched a freestyle moto demo at the Monster Energy Compound, but there was no shade, so I eventually retreated to the trees near the entrance to the hairpin turn.

Arriving early also gave me a sense for the views you can get with a general admission ticket.

The friend with whom I'd watched the US Grand Prix races had been to Montreal the year before and recommended I buy a seat as it's hard to see from the ground.

I quickly found he was right unless you know the track well enough to find a good spot and get there early. Very early.

On the plus side, it's cheaper (about 100 Canadian dollars), and it's as close as you'll get to the cars.

I'd done some research online about the best places to sit before buying my ticket, but it wasn't until I started writing this story that I discovered The F1 Spectator.

This F1 blogger has photos and descriptions of all the seating areas around the track in Montreal.

Ultimately, I felt a seat in Grandstand 34 on the inside of Turn 10, the hairpin curve, offered the best value.

As this was something of a last-minute trip, the official tickets had sold out, and I had to accept paying a premium on StubHub ($268 including fees).

Once I reached my seat, though, I knew I'd made the right call to spend a little extra.

The weather was perfect, if a little hot, and the view was excellent.

After the Canadian National Anthem, military jets performed a flyover, and the race began.

First, the drivers took a formation lap, which is a warm-up lap at low speed to heat their tires.

The sounds of these cars are intense! The video clip above doesn't do it justice.

I'd first experienced it walking around the track in Austin, so I was prepared with earplugs, but it was a different feeling being seated for the whole race.

It's worth listening to them a without ear protection for a bit, but doing so for 70 laps over two hours would've been too much.

Sebastian Vettel, in red for Ferrari, began the race in the pole position and dominated through 48 laps.

It was his race to lose. Unfortunately for him, he made a mistake that gave Mercedes' Lewis Hamilton the lead (and ultimately, the win).

With Lewis Hamilton hot on his heels, Vettel veered off the track into grass momentarily.

He brought the car back onto the track. However, officials penalized him five seconds, stating his recovery was dangerous to other drivers.

Specifically, Hamilton, who at best lost a chance to pass Vettel to take the lead and at worst was almost struck by the Ferrari driver.

These events happened in a different part of the track, so I couldn't see them live.

There's a jumbo TV screen inside Turn 10; however, I was a bit far from it, and it could be hard to follow what was going on.

My T-Mobile connection in Canada wasn't working properly, so I lacked mobile internet to follow the race.

I had to rely on the guy sitting next to me to clue me in when I asked what was going on.

The race was over faster than I expected. With just a few laps to go, Hamilton was all but in the clear to win, so I left my seat to beat the crowds to the metro.

I was able to get back to the Hotel M Montreal in about 15-20 minutes, where I chilled out in the air-conditioning for a while.

As other guys returned to the room from the race, they discussed the controversial penalty that handed Hamilton the win.

In the evening, I wrapped up my first Canadian Grand Prix weekend with delicious, artery-clogging poutine at Frite Alors near the hostel.

For the best rates on tickets, buy direct from Formula 1 Grand Prix du Canada. Pre-sale tickets will be available next month on August 19 and 20th.

I found there were still plenty of tickets available one month out from the race; it's just that I waited another few weeks to buy and by then it was sold out (and I had to use StubHub).

Hotel M Montreal (Author's Pick) – this boutique hostel is the clear favorite in Montreal based on the 9.5 guest rating on Hostelworld. The bunk beds are sturdy and include privacy curtains, secure lockers, reading lights, and electric outlets. For socializing, there are several rooftop jacuzzis and a bar in the basement. The location is excellent, whether you're in town for the Grand Prix or regular sightseeing.

HI Montreal – As an alternative, the HI Montreal hostel is located downtown. This puts it closer to some of Montreal's terrific museums and the pre-race fan festival on Crescent Street. However, the trip to/from the race track via metro will be longer. The hostel has a solid 9.2 guest rating on Hostelworld.

Montreal is full of cheap eats and excellent mom and pop restaurants.

Check out Feastio for my full list of the best places to eat in Montreal.