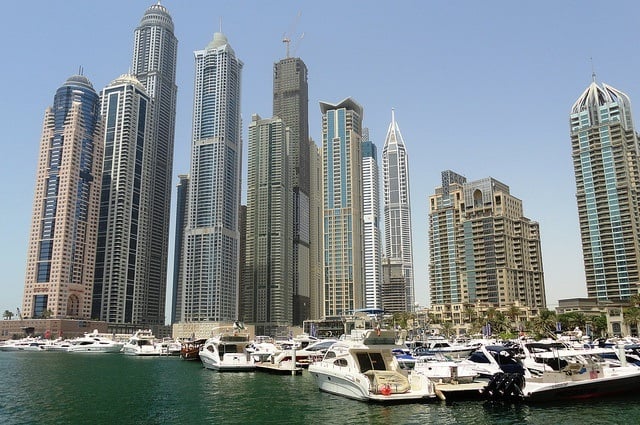 [I]t’s a familiar story happening in cities all over the world: artists move into rundown areas for the cheap rents, which begins a process of regeneration and – to use a dirtier word – gentrification.

Dubai is a city that doesn’t need any help with either of those things.

I mean, why would it need artists to help regenerate areas of the city when it can simply build the living daylights out of anything that isn’t already spectacular?

But anyone who loves art and the effect it can have on a place ought to be pleased that Dubai does have its own art scene, and just like in other cities, it’s a grass-roots movement rather than an installation from above.

Like those hubs of creativity, Al Quoz is a formerly rundown area which still looks like an industrial no man’s land.

Old factories and warehouses, which have barely changed in appearance on the outside, are now home to art galleries and studios – the basis of the Middle East’s groovy new arts scene.

Trawling down its streets, there are vantages where you could confuse Al Quoz for the industrial zones of London and Brooklyn, where young artists have migrated in search of cheap rent and studio space.

It looks, feels, and mostly is a world away from the glitz and hubris of central Dubai.

The nucleus of the Middle East’s avant-garde is the Third Line gallery, an ultra-modernist white cube where the UAE meets the west coast of the USA.

From the outside, you could be staring at a piece of California pop art – a scene from Ruscha, Hopper or early Hockney.

But inside, a western template is given over to supporting mostly up-and-coming and established artists from the Middle East.

Step into the Third Line on any given day, and you could be treated to an exhibition or a talk by one of the region’s many accomplished artists, and a book shop supporting their growing body of fantastic contemporary art.

Make no mistake, Dubai isn’t a pale imitation of a western gallery. It holds its own on the international stage, as do the many other relatively new galleries in Al Quoz.

Middle Eastern artists are increasingly breaking out into the international art scene – and it appears to be taking notice.

If you attend one of the private views or exhibition openings in Al Quoz, you won’t just find Arabian art dealers scouting for pieces from the local talent.

You’ll hear art connoisseurs from London, New York and Paris come to take a look at what Dubai has to offer.

Wow. There is no doubt that Dubai is the most awesome place to visit in Asia and now a days cheaper too. Great post man.

'Make no mistake, Dubai isn’t a pale imitation of a western gallery.' that's good, right?! Nice article about the emerging art scene in Dubai... i am visiting it next week and I can't wait to stroll the streets you mention :)

Thanks for sharing this information

“Trawling down its streets, there are vantages where you could confuse Al Quoz for the industrial zones of London and Brooklyn, where young artists have migrated in search of cheap rent and studio space.” – I’ll second Pinay Flying High, it does all sound a lil too “posh”!!

Okay, first of all ... This whole article is weird!

“Trawling down its streets, there are vantages where you could confuse Al Quoz for the industrial zones of London and Brooklyn, where young artists have migrated in search of cheap rent and studio space.” - I'll second Pinay Flying High, it does all sound a lil too "posh"!!

I live in this area called Al Barsha, which is literally just a street away from what is known as Al Quoz... Mind you, this entire area isn't all just labour camps and "west coast customs" garages! it's all segregated into a ton of different sectors... However, this doesn't mean you'll find your everyday artist or any artist for that matter along those streets in warehouses displaying their talent.... Unless someone is sponsoring you to do so!

Rent is not all that cheap and most of us down here ( the common folk that makes up about 90% of the population) don't really gives a rats ass about the art scene anyway, no matter how much it's advertised.

The only people who seem to be interested in the art culture here are either Locals who are extremely well to do and have nothing but time on their hands to attend stuff like this and waste their money on sometimes what it just splats of paint... Or, the rich and famous ( for obvious reason - spotlight time,, :D )

Anyway, point being... This whole article is bullocks! :)

"Trawling down its streets, there are vantages where you could confuse Al Quoz for the industrial zones of London and Brooklyn, where young artists have migrated in search of cheap rent and studio space."

That part right there actually made me laugh a little. It sounds a little too ambitious, well it is about Dubai after all. I've lived in this city for 6 years now and I definitely wouldn't confuse Al Quoz to East London which is the haven for artists in that side of the world (I haven't been to Brooklyn yet so I'm not so sure of that). Yes, Al Quoz has now becoming an artistic hub in Dubai (along with DIFC and Bastakiya) but I wouldn't say that it has already marked itself as to being at par with London and Brooklyn when it comes to the art scene. I'm not saying that it will never be but it might take some more time to reach to that level. It is not impossible though.

I also don't think young artists have migrated in that part of town in search of cheap studios and rent. Maybe I'm wrong but whenever I find myself in that area, it's mostly labour camps and company accommodations. No signs of artists hanging out on the streets of Al Quoz.