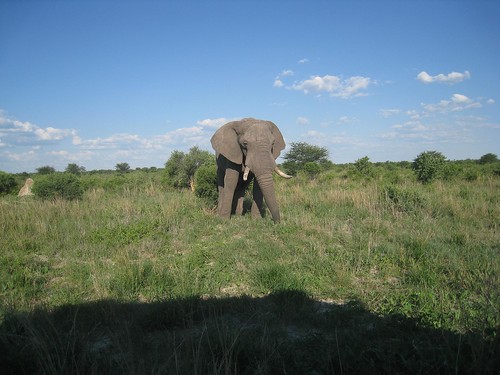 The drive back to Elephant Sands was over familiar territory, and went fairly quickly.  On the way back, I saw a giraffe along the road, and we saw several elephants up close.  A few even crossed the highway in front of us.  Dion stopped the van, and we watched as a giant elephant tried to gingerly step over a relatively low barbed wire fence.  Apparently its legs weren't long enough as it gave up and wandered away.

We set up camp in the same spot as before, and relaxed.  I was a fan of the outdoor showers, which allowed me to wash up as a bunch of Botswana school kids played volleyball nearby at sunset.  Dion told us we had the option of a $20 game drive, though it turned out the guy who would've lead it wasn't going to be back to the lodge in time.  Instead, Dion took us on a gonzo game drive in the company van.  He recruited another overland guide he knew to help push us out of any sandy situations. 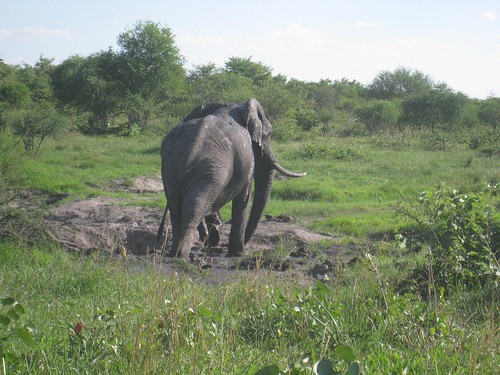 The mission was to scope out a watering hole in an area often used by hunters.  The entire region was a hunting concession, privately owned, though by anyone's account, wilderness.  Once we turned off the highway and down a sandy ” road,”? we came across our first elephant within the first minute or two, happily splashing himself with mud to keep cool.  Clearly displeased by the interruption, he trundled away.

Dion continued to navigate the difficult terrain in our van, and we continued to encounter and scare away tons of elephants, until we reached the watering hole where the road ended.  It was sometime around this point that he mentioned the illegality of his gonzo game drive.  We returned to the highway, with barely an elephant siting after having driven them away. 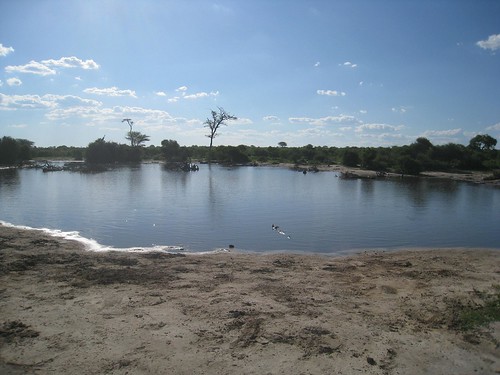 In the evening, four new arrivals joined us for dinner.  They would accompany Ingrid, Richard, and Peter for the remainder of the trip, while I faced a 12-hour drive back to Johannesburg in the morning.  I felt a bit bummed to be leaving the trip while the others still had adventures ahead of them, but I reminded myself about visiting Egypt in a matter of days.

A few minutes after retiring to my tent for the night, I heard some sloshing around.  I knew it was an elephant, and thinking it was down by the watering hole, I got out and walked toward the patio.  To my left, just a few meters away, was a big elephant shaking its head by the pool.  Wow!  I was a bit dumbfounded at my proximity to it, and stepped over to the patio quickly to be next to the people who had been watching it for the last ten minutes. 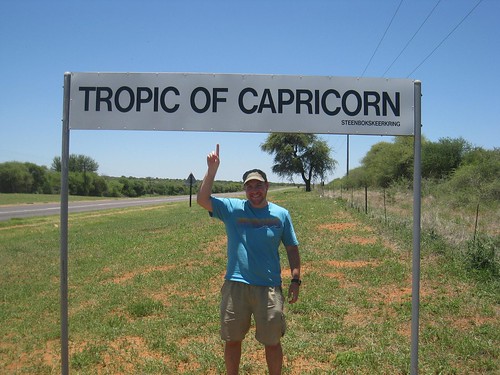 I then went back to the tents to alert Richard and Ingrid in case they were interested.  Both came out to get a look but the elephant had already wandered back into the brush.  A few minutes later, it started interacting with another elephant by the watering hole.  The sound of their tusks rubbing against each other was audible, and head to head, they slowly moved farther away and eventually out of sight.  It was a great way to end my trip into the wilds of Botswana.

Gideon, the Livingstone Trails driver, and I hit the road at 5:30am the next morning, before the rest of the group were awake.  We were back to Bob's Bunkhouse in 12 hours, including stops for gas, food, toilet, the border, and a Lianie May CD I wanted to buy.  Dion played a few of her songs over and over again until it drove everyone nuts, but one song in particular was worthy of the purchase.  It was in Afrikaans so we didn't know what she was saying, except Peter if he concentrated (Afrikaans being a derivative of Dutch).

It saddens me to hear of the fencing that is plaguing African wildlife. However I am glad that you were able to see some of Africa's largest creatures before they become even more endangered. Safe travels.