In the first article of my series on Saving for a Trip Around the World, I shared a little background on my decision to make a global tour my personal goal. I also touched on the reality of my financial situation at the time (namely my debt). For the remainder of the series, I will share the strategies and habits I adopted to bring me out of debt, thereby allowing me to aggressively save for my upcoming travels.

Write Down Your Travel Goals First and foremost, commit your travel goals to paper. The mere act of writing something down takes it out of the ethereal, ever-changing cloud of thoughts in your mind and helps make it a reality, a tangible thing you intend to achieve. In April 2002, I started at a very high level as you can tell from the photo above. I tied each goal to a motivation so I would be reminded of why it would benefit me to reach it. I knew my ultimate travel goal required a large amount of money, which would be hard to save if I remained in debt, which I couldn't get out from under until I found a new job! I posted the goals in a very visible place to ensure I saw them every day (such as near the bathroom). I had also begun to keep a paper journal around this same time. I found the practice of writing (with no intended audience other than myself) beneficial in many ways. In regard to my travel plans, because of the money required, my thoughts were primarily focused on paying off debt, saving, and continuously revising my financial goals for the upcoming months. The photo of the index card below captures my cash (vs. company stock) targets in 2006, after I had paid off my debts, and begun to earn significantly more at work. 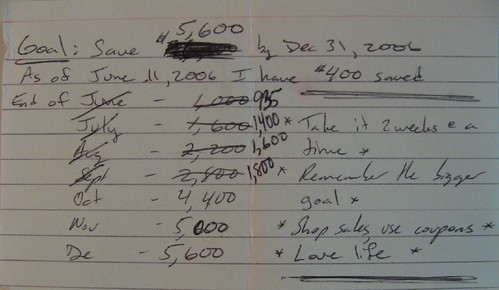 Set Financial Benchmarks I was newly employed in June 2002, though still in debt, paying more than I could afford on rent and my car, and not earning as much as I had hoped. My first savings goal was to sock away $25 per paycheck (every two weeks) toward my trip. It sounds like a drop in the bucket now, almost laughable, however it was all I could afford at the time. In retrospect, it was a turning point after years of racking up credit card debt living beyond my means. I began to consciously save money in a thoughtful and consistent manner. I started to value saving money over spending it (something credit card companies would hate to see catch on). At those early stages, the development of good financial habits was more important than the amount of money being saved. By 2006, as you can tell, my monthly benchmarks had been raised substantially. By the time I am ready to depart later this year, it will have taken me 5 ½ years to meet my goals. While this may seem like a long time, I had established early on that I was going to continue to maintain my 2002 standard of living, rather than sacrifice to the degree some others are willing to do (mostly those younger folks out there!). Constantly writing and revising financial goals helped keep me on track. I've regularly set aggressive short term goals, and rarely met them. I'd rather fall short of an aggressive goal than a non-aggressive one. I decided it'd be better not to set the bar too low, just to have a warm fuzzy feeling of meeting it. Alternatively, others may find greater motivation in setting easily achievable goals.

Next week I'll share my experience extricating myself from debt.

A friend and I are in the VERY beginning stages of planning a possible year in New Zealand, and these articles are great inspiration. Thank you!!

You're welcome! From what I've seen and read, New Zealand would be an awesome country to spend a year touring. I'm really excited about making it the first destination on my trip. I hope to spend 3 weeks there, though who knows what will happen once I touch down. :)

I'm hanging out for the next one, these are really interesting posts.

We've just written about you on Backpackers.com. Looking forward to the next installment :)

We've just written about you on Backpackers.com. Looking forward to the next installment :)

Thanks Pia - that was very nice of you over at Backpackers.com!