Like all canny backpackers, I'm sure you know the benefits of cultivating friends living in exotic locations.

Leaving aside the cynicism for a moment though, catching up with people you worked with, went to college with or met on the road who are now living the ex-pat life, is a great opportunity to see places from an insider's perspective (and, of course, get a free bed for a couple of nights and a chance to do your laundry).

Recently, as part of a backpacking holiday in Albania and Greece, we spent a long weekend in Tirana. It was a chance to catch up with an old friend from Wellington who had relocated there via Krakow, Warsaw and Varna, and to see Tirana across a weekend of day-tripping, eating, watching ballet and the Mother Teresa half marathon.

When I'd told friends in the UK I was off to Albania eyebrows were raised. Even the well-travelled told me to watch my back. I didn't know anyone who had been to the country before, so I was a bit surprised when my Friday night BA flight from Gatwick was full – of Albanians!

A quick Skyscanner check reveals plenty of flights via Italy and one of the pleasant surprises of our Tirana visit was the brilliant Italian food and coffee. There's a large Albanian population in Italy, and the Italians have obviously reciprocated, so be prepared for many macchiatos, pizzas and seafood pasta dishes.

Steve and his family live a classic ex-pat lifestyle. Their children go to the international school through whom they've met most of their friends – mostly other families living away from their own countries who are English-speaking and enjoying a European lifestyle in a country with third-, or maybe second-, world prices and infrastructure.

Steve collected us from the airport and drove us back to his rented home in the dark. We talked till late – lots to catch up with – and then the next morning headed out of town to visit a nearby mountain village.

Albania is blessed with three World Heritage sites, and Berat is one of them. It's a pretty enough spot with a hilltop castle, but lunch at the Mangalemi was a highlight. The waiting staff skilfully upsold us to byrek (local spinach and cheese pie), plates of grilled meat (the Albanians do like to eat sheep), salad, french fries and bread. And the recommended local Birra Tirana. 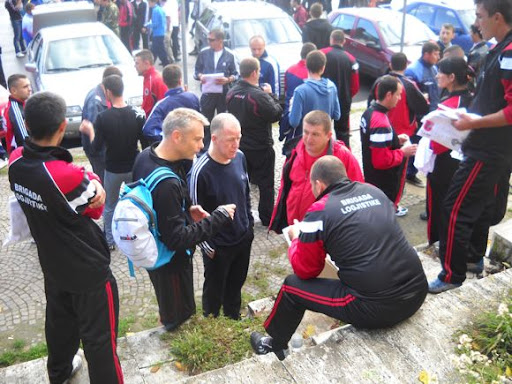 Could the Brigada Logjistike help with finding half marathon race numbers?

Food was a bit of a theme for our weekend. We ate out often and well – and usually Italian. Handy for carbo-loading for the blokes running the half marathon on Sunday morning.

Steve had managed to register (or rather had managed to get someone from his office to register he and Max) but there was still a reassuringly chaotic scene at Mother Teresa Square on Sunday morning as people milled about wondering where to collect their race numbers.

The event started 20 minutes late (all athletes reading this will be horrified) and comprised seven loops of cobblestone, hill and broken pavement (again, not what the runners ordered). 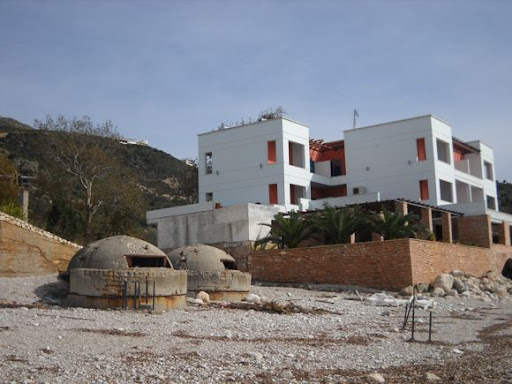 But loops this short made for easy spectating, so we settled on the side of the road to watch a couple of hundred hardy souls hurtle past, again and again. I haven't mentioned the weather – but it was to be a feature the whole time we were in Albania; a pattern of torrential rain, followed by bright sunshine and rising temperatures.

Our post-run lunch was outside in yet another excellent Italian restaurant in the Taiwan complex, followed by a drive to the beach at Durres for a paddle to soothe tight calf muscles. We dashed back to Tirana in time to catch the first rain storm of the evening en route to the Opera House and a ballet performance.

It was all very lovely, and the low price of tickets (300 lek each, round $3US) was an insight into how important and accessible cultural activities are in this part of the world. The theatre was full – of families, groups of young people and those ex-pats again, all enjoying a classy performance at a budget price. 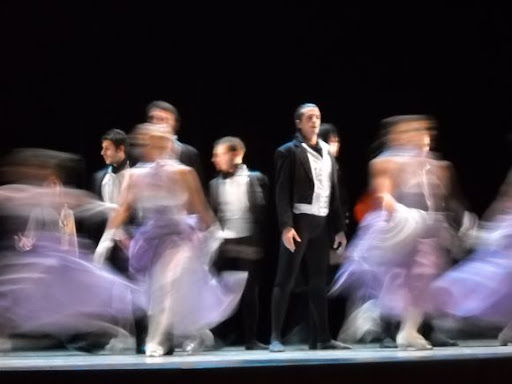 Ballet and music from Chopin at Tirana's opera house.

Our last dinner in Tirana was at the lovely Vila Logoreci where we feasted on seafood and salad and good house wine. Being under the care of local ex-pats meant not only were we guided to great restaurants, but also advised what was best to order once we were there. The value of this advice was revealed when, after only a couple of days looking after ourselves, I became ill – not sure where or why, but I'd say the local food had something to do with it.

I know we had a different experience of Tirana by staying with friends than we otherwise would have had. It was enlightening to talk with them and their friends about the realities of living and working in Albania, problems with healthcare and schooling options for their children. We also got a limited insight into the local political situation – specially with regard to Kosovo. The woman winner of the half marathon was a Kosovar, and she took to the stage to collect her prize off the Vatican representative (the event was after all in honour of Mother Teresa) proudly wearing a Kosovo T-shirt.

One side effect of staying with ex-pats though is a certain distance from the locals. As we travelled south through Albania we got more opportunities to chat to local people, often in a disjointed way as English is not widely spoken, and neither our Albanian nor Italian (the number 2 language) are up to much. Universally they were curious about why we were visiting, and where we were from. And rather sadly many of them were looking to a future beyond Albanian shores. The country's had a rough ride since the isolationist regime of Envers Hoxha ended with his death in 1985 and the subsequent collapse of the eastern bloc, and is still visibly poverty-stricken. 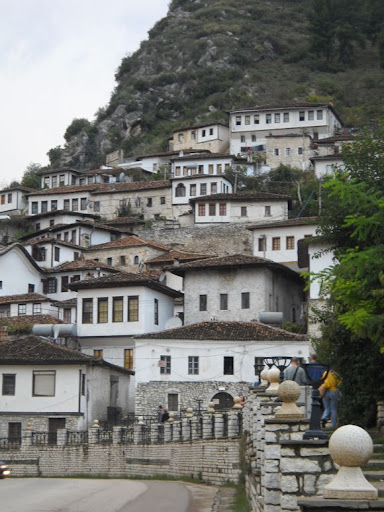 Traditional Albanian hill village at Berat, a couple of hours drive from Tirana.

The population's in decline thanks to both legal and illicit migration to western Europe and this had made me wonder how smooth our own border crossing into Greece would be, accompanied by a busload of Albanians. No problem as it turned out. It took only about an hour to process us out of Albania and into the comparative wealth and order of rural Greece.

_____________
About the Author: Deborah O'Kane has 25 years of backpacking under her (money) belt. Six months in Africa has been her longest stint on the road, and was the first step in a mid-life relocation from New Zealand to the UK. She now lives in London from where she visits Europe frequently, and runs a blog BasedinLondon. Follow her on Twitter @debokane.

This is slightly ignorant and ill informed. I lived in Albania for two months with real Albanians not expats. I do not understand why this is featured and not a piece by a person with more experience there. If you step away from the expats , you will see a wonderful culture and country. It is not a third world country and the greek border crossing is fine as western tourist are waved to front of the line. The quote about not speaking english is not true. Many in Tirana and other areas frequented by tourist speak fine english. I grow tired of people making Albania look like a shit-hole and spreading mis-information. This was not what how I saw Albania. Albania is one of the most welcoming, friendliest countries. Not the expats but the locals. Expats communities are often people living in a bubble. Go and you can stay in locals homes for 5 euro a night.