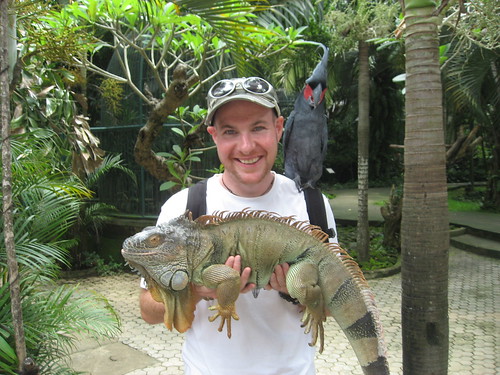 After getting a feel for life in Kuta, I decided to bite the bullet and venture inland for a day-long tour. Believe me, it was hard after all those spa treatments to tear myself away for some sight-seeing, however I knew it had to be done. 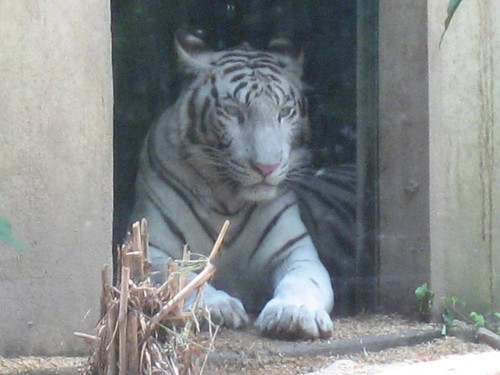 Our itinerary was a bit flexible, however the first stop was a cheesy display of wax drawings on tourist shirts. The Asian tour buses seemed to appreciate it though. Luckily, the next stop was more my style, though surprisingly so. We went to a silver shop, where I was about the only customer. After a short talk about silversmithing, I browsed the jewelery cases until I came upon some rings which caught my eye. The salesperson clearly told me I could negotiate down from the list price, and my natural indecisiveness seems to work wonders because he brought the price down by 50% to about $17 for a sterling silver ring. The middle section rotates, so I spent the rest of the day spinning it around incessantly. 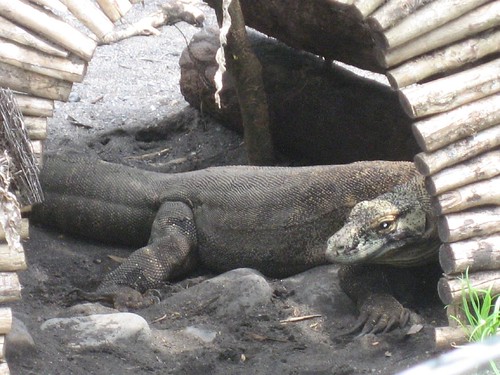 The third stop was unexpected – The Bali Zoo. At $18, I was a bit unsure of whether it'd be worth it. As I walked through the entry, I quickly realized this was a zoo unlike any other I'd been to. Music was playing, gigantic (probably man-eating) spiders were in webs near exhibits and under some paths. On two occasions I was quickly given a bird or lizard (or both) for photo-ops. I saw my first albino Bengal tiger and Komodo dragons, along with a few African lions, and Javanese spotted and black leopards. Tons of monkeys and exotic birds, and a few snakes rounded out the highlights. The zoo was private, and all the animals looked healthy and well-taken care of. 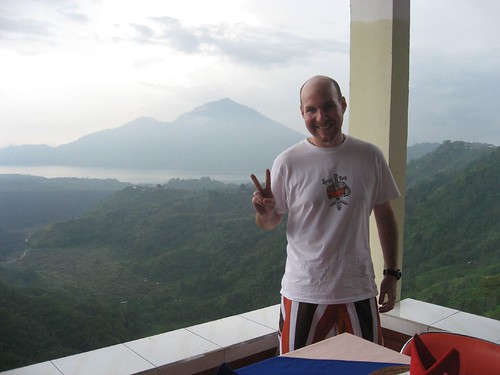 The blazing heat and muggy humidity soon gave way to massive rains. Streets flooded with water, debris, and trash. Spouts from homes and temples along the roads spit out tons of water. My driver and just about everyone else slowed down accordingly.

As the rain stopped, we emerged near the north of Bali to a stunning scene – two massive and misty volcanoes around a lake, on the opposite end of a lush, green valley with little tropical birds flittering around. My lunch stop was an Indian restaurant perched atop a ridge line (amongst many others with the same view). I ate my money's worth at the buffet, and we were off to a nearby temple. 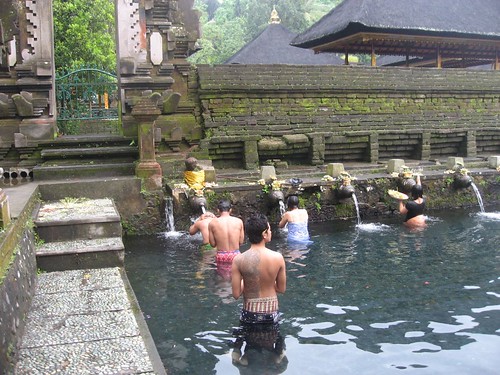 I had to rent a sarong to access the bathing area of the temple. My driver/guide joined me as I knew I'd have questions. He said people go to the temple daily, and even bathe in it daily, as the water is thought to be coming from the Gods. I thought that was a rather impressive act of devotion.

Though my driver offered to stop at another one or two places, by mid-afternoon, I was ready to head back south to Kuta and unwind – culture, volcanoes, and giant Indonesian spiders now checked off my “to-do” list for the 3-week stay.

WOW! I can't imagine picking up a giant lizard like that. I'd be afraid it would eat me up. You are a brave man, sir, I tip my hat to you.

WOW! I can't imagine picking up a giant lizard like that. I'd be afraid it would eat me up. You are a brave man, sir, I tip my hat to you.

you are lucky being in that paradise:) I wish to get back there!

you are lucky being in that paradise:) I wish to get back there!

inland bali is where all the cool shit is at imo. I remember checking out that volcano also a few years ago, I had almost forgotten about it! did you go to monkey forest? that place is sweet, check it out in Ubud